Since ages we talk about human evaluation and evolution. From the days when human used to be apes, we are living in a well equipped scientific era. And, we are looking forward to enter into an automated and controlled humanoid era; sooner or later. Unless, of course, something unexpected happen and change the course. And, as per the known history, such incidents are quite possible.


Recently we got a chance to explore an acclaimed book – Sapiens: The Brief History Of Mankind by Yuval Noah Harari – Hindi Version.

Actually, during a promotion, we got a few free credits for audible books. Hindi version of this book was available for free (against the use of 1 credit); so we grab the opportunity and bought the book. 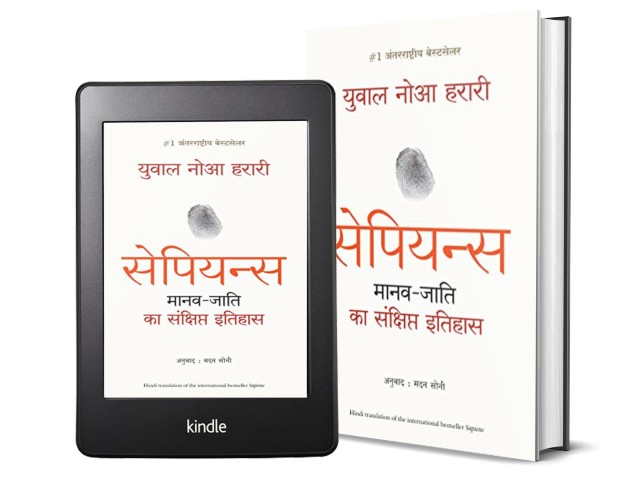 As you can see, the cover page is quite minimalistic. The white background and glossy cover pages gives it a rich look. The simple fonts used for the text makes it look classic and appealing.

A simple yet attractive cover page.

The Book And My Views And Reviews For The Same:

Usually we talk about the storyline ond our overall views for the book in two distinguished segments. As the nature of this book is little different, we are merging both these segments here.

First thing first. The author has done remarkable amount of research to consolidate the history of mankind or Homo Sapiens, as we are called scientifically. The full identifier is Homo Sapiens Sapiens, and almost everyone who took Science stream for their studies know it.

It is a very lengthy book, and it require around 20 hours of listening. Some of the stuff in the book are so detailed and explored with reasoning, so it took even more time to pause and digest before you move forward listening to it.

One thing we must remember when exploring different cultures, ethnicities and ways of living that everyone is gone through a different growing up environment. So, his/her values are based on the culture he/she was introduced during various stages of his/her life. It is thus important to consider when you elaborate someone else’s exploration of your native/culture/way of living/belief system, it would be different than yours. And, it is obvious.

Rather than getting offended by the same, you have to look at it as a foreigner’s perspective. It rather gives you a neutral (and mostly incomplete) exploration. But you need to admire the explorer for exploring something unknown to him. Of course, you can pin-point the mistakes and provide missing details.

This positive approach is very much required when reading this book.

While the Earth is quite old, we Sapiens are comparatively not too old in terms of our existence in the current form. Our existence is since almost 70,000 years.

Comparing with our lifespan and the historical timelines we are familiar with, it is definitely a very huge span to summarize. The way the author has “briefed” this history, is really commendable.

The discussion about earlier days when Sapiens started making some instruments to get help in hunting, his cave days and his exploration of farming. The author mentions one interesting point that we often skip considering. With the rise of farming and after learning the art of storing the grains, our lives has to be changed significantly, right?

It did, of course.

But not in the way desired.

For example, when you have the grains required to eat during next entire year, are in your store, you should be relaxed. You don’t need to hunt daily, anymore. Earlier it was required to put in efforts to earn your food for the day. It was a requirement to survive. Now, that is already fulfilled for a long time. But, now you are overwhelmed by other worries. Safety of the storage. The grain getting contaminated, eaten by rats, stolen by somebody else,… the list is long. So, did it solve a problem, or rather brought in many new?

Same way, with the rise of technologies, the transportation got really easy. The journey that required months or days, can be completed in hours and minutes. So, you must have a plenty of free time you saved from commute. But, do you really have that time? Haven’t other tasks and requirements already claimed that luxury from you?

The list can go on. The point is the things meant to make your life comfortable actually makes it more complicated and tensed! We don’t have the challenges that our ancestors faced, but it brought in more challenges for us.

The book talks about various belief systems. In addition to Christianity, Islam and Hinduism, he also talks about Buddhism. And, like many, he also consider it as a different religion. This is the broader perspective around the world. The exploration of Siddharth’s life and how he became Gautam Buddha, is really remarkable.

Same way, the author talks about various invasions happened during the history, and he doesn’t shy away from using right words. He also mentions that the tribal people used to carry a pot with smoke and fragrance when guiding the European representatives (or rulers) and invaders. It is not to respect them, but the tribal people are used to remain neat and clean. While these outsiders used have foul smell as bathing was not in their daily routine. Also, they used to wear the same clothes for days.

The author talks about economics and the rise of money. From the days to have a barter system, the problem it caused, the way the need of solving this problem, gave birth to currency,.. everything is explored in detail. Also, the author brings your attention towards an important fact, what make a currency valuable? The trust. You should read this chapter for sure.
The author also talks about various isms like Socialism, Marxism, Capitalism, and others. Their benefits and their shortcomings. He also goes ahead to compare the impact of these isms with religions! And, if you like it or not, the comparisons found logical.

The rise of political systems, Monarchy and other stuff is explored pretty effectively.

The book also talks about man’s quest to become God. The way we started playing with DNA for example. Of course, it contains discussions like: Is it possible to have immortal life? Is it possible to remain young forever? Will future be dark one? or would it be fantastic?

But more importantly, the author draws reader’s attention towards the fact that people and visionaries thought about colonies on Moon and Mars, Robots taking over Human, and much more. But, no one thought about Internet for example. So, it is quite possible that the time will take unexpected turns, and future can be different that what we can think of.

The illustrations and photographs at various places makes the book more informative.

I’ve deliberately skipped many segments from the book toe avoid spoilers. It is also one of the reasons I tried avoid quoting lines from this book.

The book doesn’t contain reference for Rigvedic people, very ancient Indian civilization, discussion about the myths about Aryan invasion theory etc. While from a global perspective, it might be out of scope of the book. But, readers from Indian subcontinent will miss them. The author has explored British and Mughal rule times though.

The Hindi audiobook is narrated by Babla Kochhar. His narration requires a special mention as it makes listening to this book quite an interesting experience.

Despite its limitations from various aspects, for a regular reader, it is a package worth exploring. If you can read with in an open mind, it is definitely an intriguing book.

Where Will Man Take Us? By Atul Jalan | Book Review

Previous: The Inspiring Story of Zoho By Ashish B. | Book Review
Next: Invincika | A Sci-Fi By Varun Sayal | Book Review