Posted by: Editor July 3, 2022 in Books, English Leave a comment

The world of fantastic fiction is an unending source of stories that highlight the richness of human imagination which creates worlds that are richer and deeper than our own times and filled with magic and adventures. There are a lot of  works that weave the threads of mythologies around the world with a rich landscape filled with humans and other races as they face and resolve the conflicts of their times.

We have started exploring the Wheel of Time series by author Robert Jordan this year and are enjoying the rich fantasy built and revealed layer by layer as we join the characters of this world on their journeys. We have reviewed the first book of this series here on Thinkerviews:

The Eye of the World


Published in 1990, The Great Hunt is the second book in this series and has been loved by readers all around the world. It has also been split into two parts in 2004, if you are looking at later versions. And here is our review of this book for you on behalf of Team ThinkerViews. 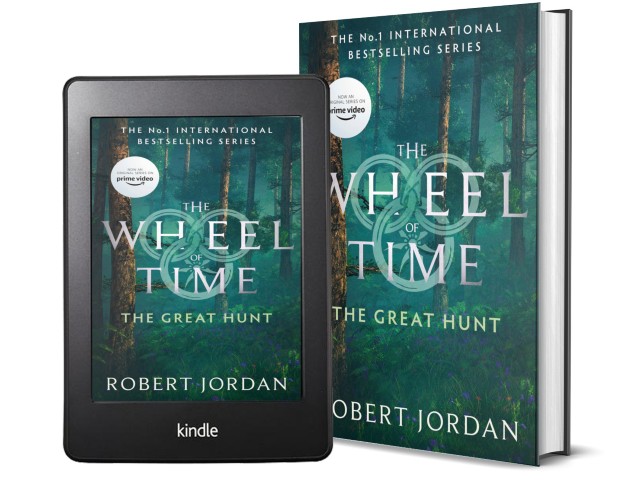 As you can see, the latest version of the book has a very attractive cover page. It follows “green” theme. You can see a dense forest, and, of course, the wheel of the time, as well. The latest cover page also shows a note about the its TV series adaptation on Amazon Prime.

The old version cover pages were simple. You can see one of them with “audible” version of the book. Another version of the cover page reflects the same from earlier English novels. With the time and commercial success, the appearance of a person or media changes a lot (in good way); and the cover page of this book is an authentic example of the same :).

When we left the Eye of the World at the end of the first book, we knew a few things: Rand, Mat, Perrin, Egwene and Nyaneve know their lives are not going to be lived the way they always imagined. They are all marked up for bigger destinies and they must all follow their own paths.

They have all been sheltering in Fal Dara since the last battle. And so we learn the Shienaran ways of life and culture while we see how Lan teaches swordfight to Rand, how Mat is still addicted to his dark secrets and how Perrin still hopes to outrun his inner self. Then the flame of Tar Valon arrives – the head of the Aes Saedai Siuan Sanche sees the young people for what they are. But the visit also triggers the dark friends who attack the castle from inside and in the resulting chaos – the five are split up again.

Egwene and Nynaeve go to the White Tower to start their training as Aes Sedai. Rand, Mat and Perrin join Lord Ingtar’s quest to retrieve the stolen Horn of Valere. The darkness is gathering around them with every encounter they have with what the trollocs led by Padan Fain are leaving from them. And then somehow, Rand, Loial and Hurin end up in an alternate world which looks like theirs, except for appearing completely deserted. Here, they meet beautiful Selene, who nudges Rand closer and closer to using his power and access the Source.

The parties meet up again in the city of Cairhien and Rand finds his long lost friend Thom Merrilin. But there is really no time when Rand is not being pursued. Neither is this the case with Egwene,  Nynaeve and Min. All three of them get lured out of the White Tower and towards a place that literally leashes women who can channel the power.

As has been told since the beginning of the book, the great hunt for the horn of Valere will lead everyone to Toman Head and that’s where Rand will once again have to face his arch-enemy…..

Will this battle lead to the branding foretold or will it play out to change the course of prophesies?

Let me start with some of my favourite lines from the book:

The Wheel of Time Turns, and Ages come and pass leaving memories that become legend, then fade to myth, and are long forgot when that Age comes again. In one age, called the Third Age by some, an Age yet to come, an Age long past, a wind rose in the Moutanins of Dhoom. The wind was not the beginning. There are neither beginnings nor endings to the turning of the wheel of time. But it was a beginning.

We enjoy complex stories that take us through journeys of discovery – self and the world. Getting through one battle is only the start of something that Rand hardly understands. There are thousands of years worth of antagonism, history and prophesies and expectations to go through before he can come to terms with who he is and what must he do with the burden he did not ask for in the first place. Same goes with the others. And this book shows them the possibilities and the “could have beens” time and again through alternate universes for Rand, through Aes Sedai testing of past, present and future for Nynaeve, through dreams of Egwene and through visions of Min:

If a woman go left, or right, does time’s flow divide? Does the Wheel then weave two Patterns? A thousand, for each of her turnings? As many as the stars? Is one real, the others merely shadows and reflections?

And then there is the sweep of history as empires rise and fall over time. We see more Arthur Hawkring’s legends here – by the way reminds me of King Arthur stories – and his legacies. How a branch of the family living away from the broken world develops a set of beliefs and goals and political intrigues so different and yet all consuming to them. As their travels through the land shows Rand how insignificant humanity can be in the whole scheme of things:

What nation standing whole today will fail tomorrow? We are being swept away, humankind. Swept away like flotsam on a flood.

And yet what is the history of humanity but the millions of lives lived and billions of decisions that could lead to endless results and consequences. For all the novelty of this sense of skill and power and sacrifice and burden of these journeys, they are fighting the inevitable battle that takes place again and again and yet there has to be subtle changes in the moves and countermoves as the enemies learn of each other with every fight:

Sometimes old enemies fight so long that they become allies and never realize it.

And it is the inevitability that gets the upper hand. When you are born to bear a burden, you must, whether you are prepared or not. Because someone needs to:

Death is lighter than a feather, duty heavier than a mountain.