John Grisham is indeed a very popular author. The legal thrillers he wrote are meant to be bestellers! The reasons include his actual exploration of the field. And, he knows how to weave an interesting thriller. It is very important, as ultimately, what you write matters, not your skills or your background. He is a proud author whose many books are adapted into movies.

Today we are going to talk about his book – Theodore Boone, Kid Lawyer.


It is indeed an experiment that went successful. He imagined a young school going kid who is brilliant – Theodore aka Theo. Theo’s parents are lawyers and his uncle also used to be a lawyer who is almost retired(!) now. The kid knows a little bit of law and has a helping nature. Of course, he is not a lawyer, but he tries contributing to the right side of the law.

The book got very popular and with its commercial success, the author went ahead writing other books in “Theodore Boone” series. Here is one of the books from this series, we got a chance to read and share our review for the same, previously.

Let us take a look at the cover page of this book. It is important to for a book to have an attractive cover page, as it serves as a first impression for the young readers looking for their new adventure: 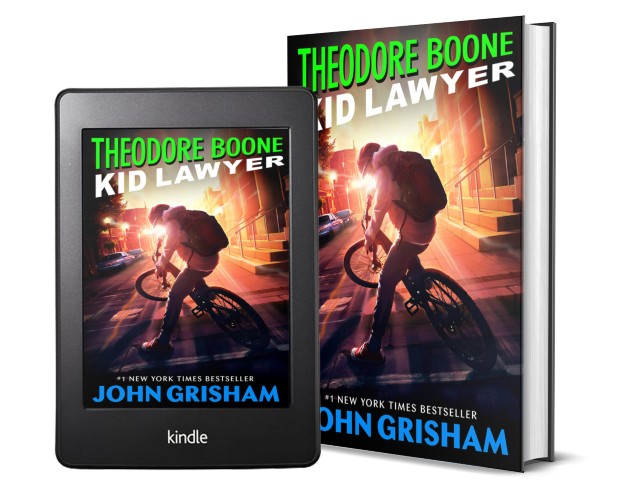 We found total 4 different version of the cover pages for different editions of the book and we see gradual improvement in them. The cover page embedded here shows a young kid on his bike (bicycle). It represents the protagonist, of course. Theo loves to wander in the streets of his hometown on his bike in addition to his regular schedule of going school to his parents’ office to his uncle’s office to his home. The young, energetic and fearless persona of a disciplined kid quite well (You can notice him wearing headgear).

A not so attractive but intriguing cover page.

Theodore Boone is a happy boy growing up in small American town of Strattenburg. Theo is only child of lawyers Woods and Marcella Boone, who have a joined practice. They both deal in the different streams of the law, though. Theo’s life runs on an exact routine every day from breakfast to bedtime with allotted times between school, his parents’ office and their home. His beloved dog Judge is with Theo everywhere except for school, and Theo visit his uncle Ike – at least once a week. One of Theo’s best friends is April, whose parents are currently going through a rough patch and so April is feeling a bit low.

Theo has an ambition of becoming a successful lawyer when he grows up, so he has made a study of the courthouse and how everything works around there. Especially now, when the court is considering an almost perfect murder case. Theo spends every spare minute he can find to follow the case prosecution.

He knows all the players from both sides, does a presentation to his class about the case and also gets a permission for his class to attend the court during proceedings for a day. Here, they all see Honorable Henry Gantry listening to witnesses and lawyers debate whether Peter Duffy killed his wife Myra Duffy.

Everyone has an opinion about the case and who is the murderer – including Theo. But, little does he know that in one of his weekly visits to soup kitchen, Theo will discover a key witness who has not come forth so far.

Who is this witness and what did he see? Is Theo getting into deeper waters by the minute by advising this witness? Once Theo discovers who the real murderer is, will his family be safe?

John Grisham has certainly created a likeable character in Theo – half the man, twice the lawyer, as the tagline of the book says. He builds up Theo’s life very efficiently, in the first few pages, as he tells us how Theo eats breakfast alone and a fixed dinner every night. How his professional parents have very busy, very organized lives that have led to Theo becoming quite independent at an young age. This is quite important for a young detective, as they do tend to take a lot of initiative on their own and must have problem solving skills to match:

Theo’s mother, herself a busy lawyer, had been trying to lose ten pounds for at least the past ten years, and because of this she’d convinced herself that breakfast should be nothing more than coffee with the newspaper.

The setting of small town Strattenburg is also perfect for a boy playing lawyer, as all the big buildings – courthouse, post office and library are quite close to one another, and Theo and most of his classmates can ride their bicycles everywhere. Another important means to independence.

Growing up Theo has absorbed Law as other children absorb their surroundings, and easily navigates his way through criminal court, family court and animal (Kitty) court, where the administrators are all amused by this little lawyer and normally give him the information he requests.

There were small ones where more private matters were handled without juries, then there was the main courtroom on the second floor where lawyers battled like gladiators and judges ruled like kings.

Theo  is also good at making use of this information as he takes little problems of his classmates – like their pets ending up in the Kitty court – and helps them with advice and information. While other children may want to skip school for watching TV, Theo tries to skip school to go to courthouse, by pretending he has stomach ache 🙂

“You’re a very sick boy,” his father said. “I say you should skip school tomorrow so you won’t spread this terrible infection. But, it might be a good idea to go to court instead and watch the Duffy trial. What do you think, Mom?”
“Oh, I see,” she said. “A sudden onset of the flu.”

John Grisham takes us through Theo’s school and his friends and also how Theo likes to talk to them about courtroom trials:

For those of you who watch a lot of television, don’t expect fireworks. A real trial is very different, and not nearly as exciting.

Although their classes are gender separated, Theo makes time to see his friend April during breaks and they chat over internet in their spare time. He has learnt kindness from his parents who also help others and make Theo part of the process, too:

After dinner, Mr. Boone set up a makeshift office at the far end of the dining room, and a few homeless people drifted that way. He would help them with problems that usually ranged from being evicted from their apartments to being denied food stamps or medical care. He often said that these were his favorite clients. They couldn’t pay a fee, so there was no pressure to collect from them. They were grateful for whatever he tried to do. And, he genuinely enjoyed talking to them.

Because of the more sensitive nature of her work, Mrs. Boone saw her clients in a small room upstairs.

Theo’s task was to help with the homework.

And so we enjoy Theo’s life as well as his little adventures, until he gets himself involved in a serious crime investigation and life is no longer just exciting, but also dangerous. As Theo learns to navigate these events, we can see how his character is being developed into a serious investigator for the future books to come. In that way, this first book in the series is there to build the background and introduce us to all players while we also have a murder mystery to solve.

In summary, an entertaining adventure series featuring a real-life hero who is learning to be a crime-fighting lawyer from an early age…

The Racketeer | Book By John Grisham