Indian mythological tales are filled with treasure troves of stories that span through epics like Ramayana and Mahabharata and multitude of puranas. Over time, some of these stories which are a small part of big collection, are explored further by writers of each age and we get a new interpretation to reflect the generation that is interpreting it.

For example, the stories of transformation of Rishi Vishwamitra, legends of Parshu Ram, story of Satyavadi King Harishchandra all have been expanded and became popular through folk-lore and writings of various authors. Then there is the story of Dushyant and Shakuntala, which is all but immortalised through Abhigyan Shakuntalam by Kalidasa. And while Kalidasa told us a bit about their son Sarvadaman who played with lion cubs, we also know him as Bharat, after whom the country is named Bhaarat.

And so when we came across Dr. Vineet Aggarval’s book titled Bharat – the man who built a nation, it was a delight to add it to the reading list. We have previously read and enjoyed following books by Dr Vineet Aggarwal and also connected with him through an author interview:


And here is our review of this book for you on behalf of Team ThinkerViews. 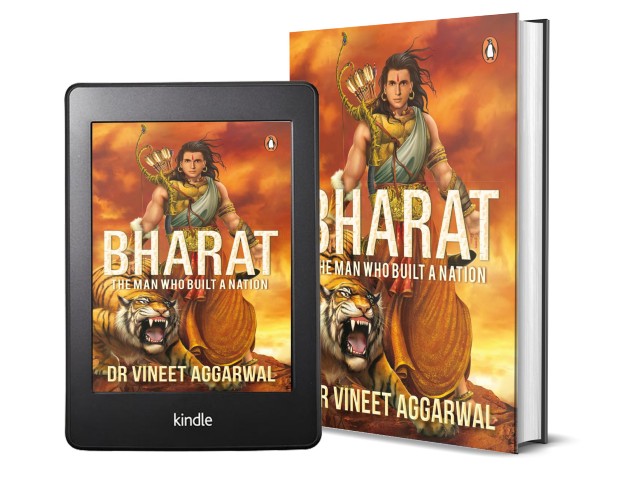 Bharat – The Man who Built A Nation by Dr. Vineet Aggarwal | Book Cover

As you can see, the cover page of this book is really appealing. Use of cheerful colors makes a prominent impact. You can see the young protagonist, Bharat, in royal attire with his weapons. As per the scriptures Bharat, who grew up in jungle, was fearless and at the very young age used to count the teeth of a lion. Seeing him with a tiger on the cover page not only reminds of that legend, but also reflects the persona of this brave heart king who was a capable administrator as well.

Overall, a really impressive cover page that will catch a potential buyer’s attention in a compendium of book.

And every part tracks the events and lives of this family. We meet young Shakuntala and Dushyant, one growing up in a Hermitage, the other crown prince of Chandravansh as a chance encounter leads to hasty marriage and Dushyant departing with promises to make her his queen. But when Dushyant arrives back to Hastinapur, his father has just passed away. Grief-stricken, Dushyant blames himself and Shakuntala for not being there in the last moments of his father’s life.

And so when Shakuntala comes to Hastinapur, carrying his child, Dushyant denies any involvement with her and sends her away. Luckily, for Shakuntala, her mother Menaka and her adoptive family are there to support her through this tough time as she gives birth to a son. A chance encounter once again brings Dushyant and Shakuntala face-to-face as the king meets Sarvadaman for the first time.

The family unites and Sarvadaman goes to Hastinapur to grow up as a prince and heir of the kingdom under tutelage of his grandfather Vishwamitra. Years go by and Sarvadaman is crowned king as Dushyant and Shakuntala plan for Vanprastha.

As Raja Bharat, Sarvadaman is faced with invading armies at his borders threatening to destroy the kingdom he has inherited. How he defeats his enemies, wins over trust of other kingdoms, builds a family and obtains a worthy heir to rule the country, now named after him – that is to be enjoyed by reading the book…

We have enjoyed reading Dr. Aggarwal’s books for their exploration of characters who have bigger destinies than they could have anticipated, but this book is also enjoyable for its central character of the man who united India of his times. In the current world, although we have a lot more opportunities and material comforts, we seem to be moving towards more close-mindedness and divisive society than ever. The differences of caste, colour, creed, language and religion are still being promoted and being taken advantage of all around the world. It is then good to remind ourselves of how all of us should stand for building a better society, so future generations have a good world to live in.

The story itself is a good blend of many stories as the characters of the author’s previous books play some part in this one, too. While Vishwamitra is  Shakuntala’s father and hence takes an active interest in Sarvadaman’s life, the kingdom that Dushyant inherits is also in the aftermath of Parshuraam’s campaign against evil.

So, the kingdom Bharat inherits, has been recovering from the previous era and could quite easily become fragmented rather than united. We know that Bharat united the country and yet when you look in the mythological stories, there are not many accounts of his reign. So, the author has used his imagination to build his campaigns and his personal life.

The book is quite enjoyable for the author’s descriptions of places as he sets the stage for these characters. For example, as Shakuntala arrives in her mother Menaka’s home:

The fragrant wind gently guided her to a nearby mountain that was glittering with jewels of all imaginable colours. Multiple rainbows shimmered in the air in the light from the two suns and sparkling cascades splashed from the mountains to form massive pools at its base. This was like no landscape on the earth. The trees with their silver bark and enormous golden leaves, were taller than any she had ever seen. The branches were laden with flowers in shades of crimson, orange, scarlet, pink, peach, mauve, lavender, yellow… and many others she could not name. Butterflies of all possible shapes and sizes flitted about, spreading the multi-coloured pollen in the wind.

The author also weaves in vedic stories of Vishwamitra saving Devrat from human sacrifice and also takes us briefly along the travels of King Harishchandra as he faces his trials along with wife Taramati and son Rohitaswa. I like the way the author has also included the story of Maharaj Rishabhdev and his hundred sons, eldest also named Bharat.

For Dushyant and Shakuntala, the author has blended the stories from Mahabharata as well as Kalidasa’s version and so we see just enough of their story as we witness the start of Bharat’s life. For later years, the author gives us a few glimpses of these two as they witness their son’s life, especially the contrast between their son’s festive wedding and their own hasty gandharv-vivah.

The author uses the rituals of life – naamkaran, vivah sanskar, antim sanskar, etc. to give us hymns and rituals:

The act had both scientific and symbolic value – the line of water created a protective boundary for the wood that would soon be lit while the breaking of the empty pot signified the breaking of all bonds between the living and the deceased.

Burn him up, but do not consume him,

Agni, let not his body be scattered without use,

When you have matured him and made ready for the new life,

Send him over to the land of the forefathers,

And may his merit take him to the heavens.

I take thy hand in mine,

I ask thee, to live with

Me as they husband,

Till both of us, with age, grow old.

Sarvadaman is taught by great minds of his time. And so there are a lot of learnings in his conversations with his elders:

Karma was capricious, you never knew when it would come back to reward you for an earlier good deed or punish you for an inadvertent transgression.

The desire for something that is not meant for us can ruin not just our own lives, but can also have far-reaching consequences for others.

Why does a king not select the most capable person from his kingdom to be his successor? Because it becomes very difficult to ensure that the people, while making their choice, are not swayed by their own attachments to clan, tribe, region and the like.

It is useless to hoard things, for one day, they shall pass on to someone else.

His lesson with Vishwamitra regarding finding something to learn from all natural beings reminded me of the story of Dattatreya and his 24 gurus. Vishwamitra discusses the merits of bees, lions, elephant, fish and caterpillar, while stating:

The size, colour, beauty, gender or race of a being is no consideration while choosing a teacher.

We should not limit ourselves while gathering knowledge and should be willing to go where the path takes us.

A good king needs to be a family man. As through family, the building block of society, he can follow his dharma and extend the same fair and benevolent treatment to all his subjects. In spite of being born through unconventional circumstances, the author tries to show us what a loving extended family Raja Bharat had, that made him such an able ruler:

For those who are prisoners of the calender, spring comes but once a year. But for those of us, who have the good fortune of having our friends family by our side, every day marks the arrival of spring.

Love was two people who were so compatible with each other that they could look beyond their differences and help each other have a good life together.

While the book is a pleasant read, occasionally, the timeline slips a bit. It would also have been good to have a more consistent narrative on Bharat’s educational years rather than glimpses of it through discourses. Bharat’s is the most likeable character, while others around him have their vices and virtues. So is his love interest and wife Jahnavi. Shakuntala is the most appearing female character and it is good to see her finding her rightful place after growing up without her natural family.

In summary, a beautifully written story of the well-loved king, who gave us a united nation….