Those who want to achieve something work tirelessly for the same. For them, the work is passion. It is not limited to time bound work hours. And yet, more often than not, they know how to maintain work-life balance. No wonder, people consider them legends.

Today, we are going to talk about one such legend Mr. Anant Pai; who is more known to his readers as Uncle Pai.

Recently I got a chance to read a book named Uncle Pai, A Biography written by Rajessh M. Iyer and published by Fingerprint! Publishing. We are thankful to the publishers for providing us the review copy. The review is unbiased and uninfluenced, as always.

At the same time we acknowledge the influence of a book cover on purchase/read decisions. It is our nature that we are attracted towards beautiful things. And, if we find a book cover interesting, we may go ahead to pick it form the display, read blurb and/or sample chapter(s) from the same, and eventually make our purchase decision. 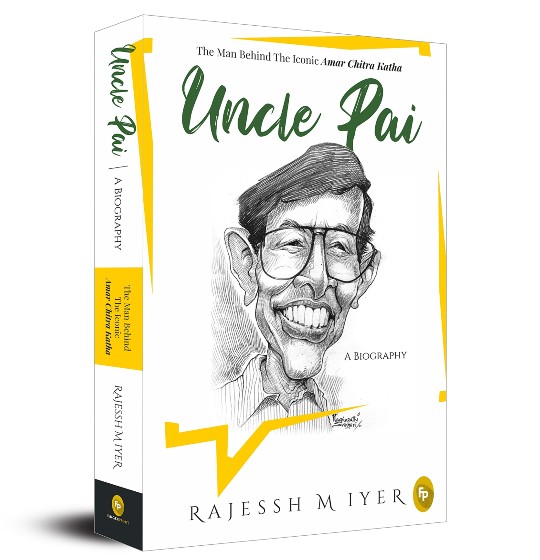 Uncle Pai, is known for Amar Chitra Katha, which is a series of comic books talking about various legends, historical incidents and stories from Bharatiya (that is Indian) culture. In such books, we see illustrations and the cover page of biography of the man behind it; contains an illustration of the humours natural pose of Mr. Pai. It goes completely in sync with Mr. Pai’s persona and his work area. The cover designed used minimalistic approach here and most of the cover page is white with black strokes. To add colors yellowish strokes are found on the cover page, that makes it interesting.

Usually we talk about a book in two distinguished segments, dedicated to the book story and our views for the same respectively. As this book is biography of Mr. Pai, and some of you may already know a lot about him. Rather than talking about the book content and what we think of it, separately, we thinking combining both these segments would be better.

It is obvious that this book must contain information about Mr. Pai and his family, childhood days, his career and various important milestones in the same, seeding and growing the idea of “Amar Chitra Katha”, and a lot more. If this information is not elaborated, and that too in detail, the reader would be disappointed. The author, however, took proper care of it. In fact, I like the wordplay done by the author at numerous places in the book. Reading this book was indeed an interesting experience for me.

The author took great care of maintaining the flow, and exploring shades of characters elaborated in the book. At the end of each chapter you will find a small block containing important, lesser-known information for the reader; I liked these segments.

Another unmissable segment is a small collection of photographs from various stages of Mr. Pai’s life; cover pages of some of his works (including Amar Chitra Katha, Tinkle and others), various illustrations from different segments, Amar Chitra Katha (ACK) logos and more.

This book is not a documentary, like in any other biographies, the has filled in the gaps in the information via his imagination. In fact, in the beginning of the book it is mentioned:

This biography I must concede, represents a confluence of both. Indeed, a bit of creative imagination has gone into the smaller narratives so succinctly describe the factual events, though nowhere has it tempered with the essential facts.

The book starts with a tragic incident happened in 1994, the office of ACK caught fire and a lot of important material was lost to it. You will find the narration style of this segment catching your attention.

If only the colourful characters on paper – who never failed to spread smiles on millions of young faces – had the power to act, as they unfailingly did in the stories, they would have done something. If not anything, they would have at least screamed. Perhaps they did. Alas! No one heard them.

The narration then goes on talking about the characters if Suppandi, Shikari Shabu, … and others. And you come across a line:

The author used indirect references to elaborate some of the characteristics of Mr. Pai (and others too). Here is an example:

Pai’s wife, Laita’s query was more pertinent: ‘Did you not bounce back from other adversities? Innumerable times?’

See, how nicely the author has referred other such tough times from the protagonist’s life. And, indirectly shown how strong support his wife was for him, throughout! We can say the same for the role of his sisters in Mr. Pai’s life. I will leave it for you to explore by reading the book.

The book also refers to the famous hymn from Manu Smriti, while exploring a chapter about – The Man and His Mind:

After a long time, you see a book exploring a traditional village from India, the author himself says:

The description would sound like one of any other quaint little village in the country.

And, it also explores landscapes, buildings, offices and other stuff from the metros also. You will also see, how, over the time, both villages and cities are transformed, through the author’s eyes while reading the book. Yet another reason to read the book.

If you love to explore linguistic wordplays, you will find some nicely written lines in the book. For example:

Whispers have mysterious ways about them. They seldom remain in a cocoon. Howsoever fiercely one tries to confine them, invariably they come out in the open, and at inopportune moments, at that.

It is referring to the tragic death of Mr. Pai’s mother.

One thing Amar Chitra Katha has done for Indian students who were fed the selective history from the britisher and other rulers’ perspective; is opening the doors of the Indian stories, history, legends, mythology and spiritual stuff. For the students and the youth, who studied in the awe of English language, the original rich Indian literature – written in Sanskrit and other languages, was not easily accessible. They (and a large number of readers, even today) don’t understand Sanskrit and sometimes even their vernacular languages, sadly. Mr. Pai translated these stories, fables, legends and other stuff into English and made it available for them. He created Indian characters whom kids can connect with and so on.

And one of the main reasons was – he knew Sanskrit, Prakrit, Pali and many other languages! He kept acquiring knowledge for Awadhi and Brijbhasha also. Of course, he knew Hindi and learned Bengali, also. The book also explores how Pai learned various aspects of Indian literature:

The narrative styles that ancient and medieval Indian playwrights and poets adapter seemed diverse from the Western writers he was familiar with by now. Pai was also enchanted by the use of the navarasa in classical texts. He later learned about Indian aesthetics and would put it to use when stories were written for Amar Chitra Katha.

It would be interesting to know that once Mr. Pai brought a stick and dared some hooligans creating ruckus on the terrace of his building. Eventually, other flat members also get courage and stand with him and the hooligans ran away from there. This is quite contrary to the joyful persona of Mr. Pai, right? But his – fight against odds – and – standing up for what is right – nature is seen in his early days also.

Once, in one of the classes, the professor inadvertently remarked that for the Hindus, ‘stone worship is dharma.’ No one in the class bothered with the statement, except Pai, who immediately reacted. ‘Sir, I beg to differ. What you’re talking about are religious practices. Dharma, on the other had, is too vast a concept to be confined to mere rituals. Dharma is all about righteousness… encompassing moral and ethical law. Following dharma eventually leads to happiness.’

The professor was speechless. ..

I can go on and on about the incidents mentioned in the book and quote them. However, it will lead to spoilers and will ruin your reading experience. So, let me stop here, by quoting Mr. Pai:

If the children of India dream, let them dream of India

This discussion and the quotes mentioned above must have had given you a fair idea about the book, and its quality. If you like reading such inspirational stories, where a boy from a small town of India progresses so much in the life that he become a leader who influence many generation with the power of his pen; this book is for you. It also demystified many myths about Mr Pai, one of them is, he is primarily a sketch artist.

Of course, some of the information must be available in the public domain also. But, this is a very comprehensive and interestingly written biography, in a story-like manner. Spread over in 32 chapters, this book has acknowledgements and legacy sections for enthusiastic readers.

When I am writing this, Kindle edition of the book is available for just INR 49!. A nice book-deal for you, if you love reading eBooks.

Overall, a nice and inspirational book taking a look at Mr. Pai’s life. It would be rare to find a person grew up in Indian, known English language and didn’t get a chance to read (or hear about) Amar Chitra Katha. If you are curious to know more about the man behind it, this is an unmissable book.

Previous: Startup Lessons from Zomato By Ashish B. | Book Review
Next: Indra: The Saga of Purandar By Ashutosh Garg | Book Review