We, Indians, belong to the land of stories. Our ancestors knew that the best way to implant values in a kid is through metaphors. So, interesting stories are weaved around a central thought and told to the growing-ups. And this keeps happening through generations. Eventually, with the technological advancements, we found other media to communicate those thoughts, morals and more importantly – knowledge.

I still think stories are the best ways to convey a message successfully. And, we, love reading and hearing stories. Stories of hope, stories of a better future. Probably that’s why all the popular readers are good orators.

Though it is something essential part of a healthy society, we find comparatively lesser books intended for kids written in a way that they spread knowledge as well. So, when recently Mr. Vasant Dave approached us for his kids special story – Secrets of a Harappan Pot, we were quite enthusiastic to explore it.

We know Mr. Dave since a while now. We got a chance to read his book Trade Winds to Meluhha and eventually, we got a chance to have an author interview with him in the context of the same. Here are the quick links:

So, we were in no doubt that the short EBook – Secrets of a Harappan Pot – must have its share of positive attributes that should not be ignored. So, I proposed to my team to go for it out of turn, and I am happy that my request is granted. Yes, I got a chance to read it and here are my views on the same.

Let us start with the cover page of – Secrets of a Harappan Pot.

It is not easy to have an interesting cover page for a book that talks about a pot that belongs to ancient times and mainly targets young readers. 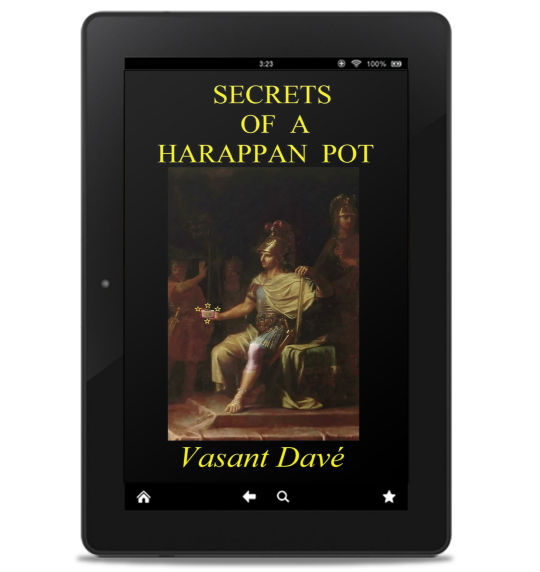 Secrets of a Harappan Pot By Vasant Dave | Book Cover

As you can see, the book cover depicts an Emporer wearing Greek/Roman attire sitting on the throne having a pot in his hand. It turns out to be Alexander the Great. (The image is edited of course). The cover page is interesting and it successfully depicts the ancientness of the central character (yes, the Harappan pot is a character in the book).

Overall, a moderate cover page which reflects the impression of a book from old times.

A little young girl was given an ancient pot as a gift by her grandmother! She was not very happy with that. She thought, probably rather than spending too much money on this old pot, her grandmother should have brought her some branded dolls. She could have played with them instead!

Hearing these words of the kid made the pot recollect its journey so far. And the story from that point forward is narrated in its own words.

As we are taking a bird’s eye view of the story, I will not go into much detail but the story starts from the time of Harappan civilization. During those days, it was probably the very first attempt of making a rounded pot. It was kind of an unthinkable task till then, but, encouraged by his wife, the potter decided to give it a try and eventually he was able to make a rounded pot.

To add to that, a scene from “The Thirsty Crow” story was engraved on it. The story, down in the line of the history of mankind became very popular and it was included in the fables of many cultures and civilizations.

The pot, due the course, pass through the hands of a Persian Emporer to Alexander the Great to the modern times.

Mr. Dave comes with an interesting story for sure. He weaved together historical incidents with a fictional tale and brilliantly linked it with the “The Thirsty Crow” tale as well. It is simply brilliant.

We need more such stories that introduce kids to the history of mankind in an interesting manner. The main reasons most of the student hates to study – or better to say, not so keen about it, especially history; is because it is presented to them in quite a boring way.

Why don’t we look at the tales of Panchtantra when we design our education system, especially after freedom from various invaders now? If presented in an interesting manner, history is a great stream of knowledge and wisdom. It let us logically deduce what to do and what should not. It also helps us understand the evolution. The irony of the system, as the famous IITian Mr. Arvind Gupta says, is, we read Children “go to school” and “run away form school” respectively when school day starts and ends.

Sticking to the book, rather than using words that you need to find a dictionary to decode them, the author uses simple, day-to-day language here.

The girl sporting two plaits looked at the wrinkled lady in disgust. “For £80, Grandma, you could have gifted me a set of branded dolls – not this lousy old pot.”

It is the honest most representation of thoughts of a young kid.

The author, however, is really good when it comes to interesting lines as well. See how effectively he elaborates on the way of living in the time of Harappan civilization along with emotional bonding between a couple is represented by him:

One sultry afternoon, my creator burped as he finished savouring flat barley bread and yoghurt in the shade of a pomegranate tree. Abandoning all his worries at the potter’s wheel, he lowered his head in his wife’s lap…

When you hear the following lines from the pot itself, you cannot stop admiring the author for writing such interesting stuff.

My mouth was open, and despite my broad collar coming in the way, I had been able to collect a little rain water inside my belly.

In addition to historical stuff, to understand that well, the author talks about geographical locations in a similar way. For example:

There’s a place called Lothal in the bowl-like formation on the map of India.

The book has many wisdom lines too. For example:

Why not work on an idea instead of killing it without trying?

And, rather than just touching famous historical points, the author brings in, through the pot’s journey, of course, the historical details about the Persian empire, the time of Ibn Batuta, the famous Chinese traveler’s visit to India, the colonial time and much more.

Another positive aspect of the book is the way the author found and weaved historical references through pictures in the book. Some of them are edited, of course.

I like the way the author has given a companion to the pot, the protagonist of the story. And yes, the author has mentioned references and credits to the source of pictures used throughout. One such picture was used in the cover page of the book and we too give credit to the original source, as we are embedding the book cover page here.

A highly recommended short EBook, not only to the children but to adults alike.

An Interview With Mr. Vasant Dave | Author Of Trade Winds To Meluhha