A few thousand years ago, the Sindhu – Saraswati plains were home to one of the world’s most ancient civilisations. As you may already know, the Indus valley civilisation is part of the trio formed with Egypt on Nile and Mesopotamia on Euphrates-Tigris rivers. Although the historical evidence and archaeological dig-ups on the Indus valley sites may go a few hundred years back, there is not much published literature – outside academia – that explores the lives of people who lived in this flourishing civilisation – believed to have over one million residents at its peak. With its cities like Harrappa and Mohenjo-Daro hosting more than 30,000 people, there are bound to be stories buried under every stone :). I think that it’s partly because the Indus script remains largely undeciphered, although a lot of scholars find some connection to the Dravidian languages.

There have been very few attempts to re-create this bronze age era going thousands of years back e.g, Ashutosh Gowarikar’s film Mohenjo Daro. There is ample evidence to show us the advances made by Indus valley citizens in town-planning, drainage systems, and so on. With the sites going as far North as Afghanistan and as far south as Maharashtra, with the large western seafront, it is natural that the Indus valley had flourishing trade relations with their contemporaries in Mesopotamia.

It is around this premise, that Shri Vasantrai Dave, has written and published his novel Trade Winds to Meluhha, in 2012. He recently provided us with an E-copy of the book and for Team Thinkerviews I am glad to share my views on it. The book is also available on Amazon in both Kindle and paperback versions.

The book cover to this novel set in ancient times is fittingly showing the background of blue sea with a boat sailing on it. But it is the contrasting images of the fair Sumerian and the dark Meluhaan that highlights the cultural span of the book across the two civilisations. 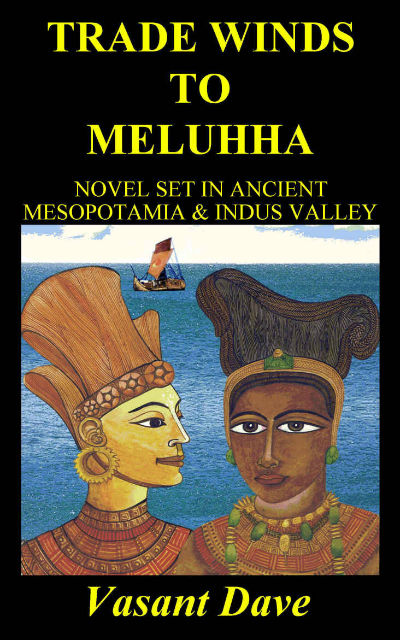 The image of the two people on the front page could have come straight out of an archeological brochure and clearly shows that this book is based on a lot of evidence and proven historical facts with a dash of fiction added to bring the characters to life.

In addition to the book cover, there are a good number of photographs and images from the Indus valley artifacts, some of which we’ll be sharing below.

The year is 2138 B.C., and for young Samasin living in Babili, life is about to change drastically. It all starts with him accidentally witnessing a murder of a Meluhhan, who gives Sam a fish hook and asks him to contact Siwa Saqra. Before Sam could get his head around the situation, he is apprehended for murder.

Soon, he is trialed in the council of wise men, where in spite of Lady Illa’s help, Sam is sentenced to the ordeal of the Bull. But, as fate would have it, the miraculous coincidence of lunar and solar eclipse in a period of few weeks, right on the days and nights when Sam is about to be executed, leads to his freedom. This, however, is an illusion.

The villains who put Sam behind bars are still out there, so Sam has no option but to go away from Babili and prove his innocence by finding this Siwa Saqra. And so the young man braves the sea winds to travel to the land of Meluhaa. Although he doesn’t know that he is being spied on all the way.

During their short stay in Sutontaru, Sam loses his heart to Velli, who unbeknownst to him is the daughter of none other than Siwa Saqra. Eventually, Sam arrives in Meluhaa and makes friends with Tall Yali and his wife Ann. We travel with Sam and Ann, as they discover mad Kutti’s treasure of gold and diamond.

But the enemies are never far away, and Sam and Ann’s fates are more interlinked than they could think. Ann is abducted and Sam is repeatedly attacked. In spite of such difficulties, they both manage to find out about the dark trade of slavery and opium that is taking place under the pretense of legitimate transport of stone dye.

While Ann is sure it is Siwa who is behind all this, Sam soon finds out that the main villain is none other than his previous master Nergal, the fox. Not for nothing, however, Nergal is called the fox. He is able to thwart all attempts by Sam and Ann, and looks like he’ll escape punishment.

Will all Sam’s efforts and Ann’s suffering yield no justice?

First of all, Shri Vasantrai Dave should be commended to have put in the effort to revive ancient civilisations by creating a story that connects Sumer and Meluhha, or Mesopotamia and Indus valley. It is a worthwhile project to take up after his retirement from a successful career as an electrical engineer. In addition to ‘Trade Winds to Meluhaa’, he has also published a small e-book called ‘How I wrote a pre-historic novel’ and other papers on the visibility of Indus valley civilisation in the modern world through art and literature. The sincerity of the author in creating an authentic setting for his characters is visible throughout the book.

As you can see, the canvas of the book covers two civilisations and although the modern-day geography may appear a bit different, you may need to look at the map provided at the start of the book to see how Samasin’s voyage takes place. There is a cast of characters provided in beginning with images of a merchant, a woman, a beaded necklace, etc. which provides the foundation for the characters created by the author.

A lot of you might have heard about the code of Hammurabi, and the author uses some of its laws in the spirit:

If an accused who is sentenced to be thrown into a river doesn’t drown, then the accuser should be put to death and his house be given to the accused.

As the author says, he has portrayed the council of wise men of King Shulgi slightly off time for the required boost for Sam’s escape, the solar and lunar eclipse however are a known fact, recorded in the tablets found in Mesopotamia:

Once Sam’s sea voyage starts, the author gives us a few more characters who could have easily been part of these civilisations, whether it is the captain Paravar, or other sailors including the spy Qwoco, while in a separate thread we meet Velli, Siwa Saqra and Muruku in Meluhaa. When Sam arrives in Meluhha, the author highlights the differences between the fair people of Sumeru and dark skinned Meluhhans, including the language and customs.

For example, horses are well-known in Sumer, but for Meluhaans, they are an unknown entity:

To the people who have never seen a horse, Samorist, it’s no more than an exotic breed of donkey.

Or the different sounds used by Meluhaans while saying the same words as Sumerians:

In Meluhha, most sailors, farmers, women – those who are illiterate – pronounce the words starting with ‘sa’ and ‘sha’ with ‘ha’.

This system is still prevalent in many parts of India, and you may have come across it yourself :).

As we see most of this journey from a young, inexperienced man’s perspective who was forced to leave his home, we discover the vastness of the Meluhaan civilisation through his eyes and as he gains information about this strange and new land:

There are Chendur Village and Muenduru City. Further up on the course of the Sindhu, a river named Ravi meets it. Somewhere along that, sticking up like a sore thumb is a fort named Harappa.

Or a new trade:

In his first week at the bead factory, he chipped away impurities of raw stones with a stag horn. In the second, he grinded the beads in shape while a husky colleague rotated an abrasive wheel. The third week saw him boring the beads, and polishing by rolling them in a leather drum filled with sand slurry.

We have mentioned earlier that the Indus valley civilisation was well-versed in building design and town planning, but as they say, one picture is worth thousand words, and you only need to look at the following representation used in the book to appreciate how neat, orderly and precise were the houses and working places in Meluhha: 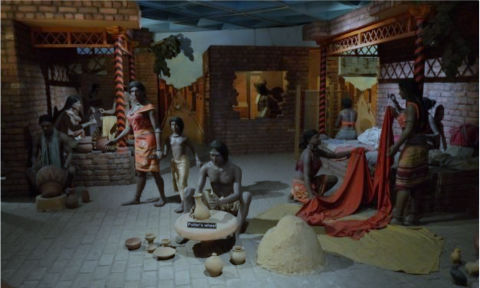 As any hero needs adventure, the author gives us a little treasure hunt which plays a big role in bonding Sam and Ann. The puzzle below is an example of Indus valley script: 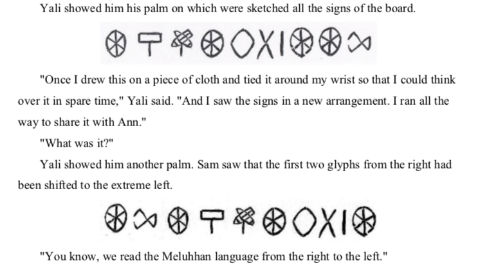 Although Sam and Ann solve this riddle by associating it with seven colours of a rainbow, at another place in the book, the author also acknowledges the closeness of the Meluhhans with the Dravidian languages by using following couplet as a message:

The Saraswathi is like a mother to the masses. She is extremely sacred as her waters are the clearest among all rivers.

The book positively highlights that the women in this period were also no show-pieces. They were strong, educated and motivated to live life on their terms. The Sumerian women used the custom of divorcing their spouses when they were no good and raised their children. Lady Illa and Velli show us glimpses of this, but it is through Ann that we see the courage of women of this time to survive through adversities.

“Trade Winds to Meluhha” is a worthwhile read, if you like adventures set in the ancient backdrop and are keen to learn a few new things about an old civilisation. At 247 pages in the pdf version, it will only take a few hours, as it is quite a swift read.

An Interview With Mr. Vasant Dave | Author Of Trade Winds To Meluhha