Posted by: Editor2 12 days ago in Books, English Leave a comment

Do you love reading thrillers? I do. Actually, all our teammates at ThinkerViews do. 🙂

Reading books for Vish Dhamija, thus, is always a pleasure. A while ago, we bought the Kindle Edition of Deja Karma, a legal thriller by him at a very attractive price, and it was in our “to be read” since then. Recently, I got a chance to read it and I am delighted to have this opportunity.

Let us take a look at the cover page of Deja Karma.

Being responsible for making the first impression of the book, or for that matter any media, the cover page can hugely influence a remarkable number of reading and/or purchase decisions. 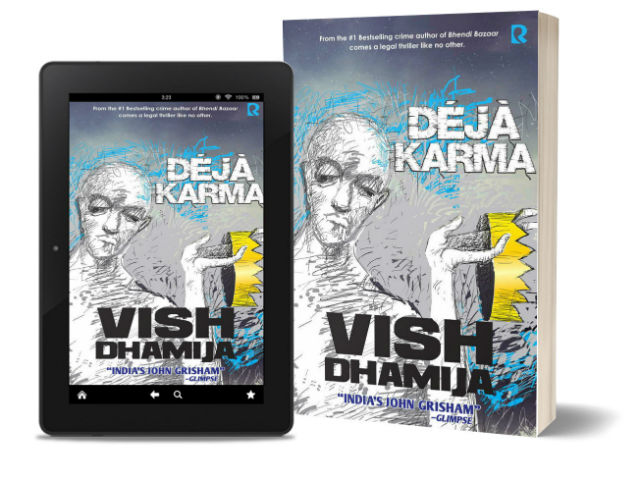 The book is a legal thriller that eventually turns into a bit of a psychological thriller. The name suggests that one’s karma eventually hunts him/her back. So, it is a challenging task for the designer team to come up with an interesting cover for this book. The cover, however, is quite unexpected. The sketch artist has used lines to design it. It represents the illusion.

A not so attractive cover page, that doesn’t give away much about the book.

The story revolves around Jay Singh, a well-known criminal defense lawyer from Delhi. In the beginning of the book, you witness the way he used to turn the cases in his client’s favor. You see him meeting a doctor and convincing him to testify for one of his wealthy and powerful clients that he was at his hospital under his observation at the time of a specific crime he is convicted for.

A son of a politician is involved in a crime and he called Jay in for help. Jay provided him the initial support and asked him to share all the actual details of the crime, as it happened, without skipping any point, so he can evaluate and decide whether he should accept the case or not.

While all these things are going on, Jay is going through some good and bad things in his personal life also. On one hand, he found a girl with whom he would ready to live his life and on the other, he lost his mother!

What turns life will take for him? Well, it will be better to explore the story from this point forward by reading the book. Over the course, you will meet Dr Mehta, Bhima, Anita, Manavi, Cooper, Bahadur, Sheeba (need a special mention), Julie, Mr. Vinay Kumar, Alok Nair and others.

Vish Dhamija is good at exploring the depth of almost all the aspects of his story. Be it the background information about the place he mentions, the incident he refers to, the names he had given to the characters, the character he mentions,… he never forgets to share some interesting reference details regarding that. That actually reflects the detailed research work he does for the book and all the personal experiences he had during various phases of life. For example, the following lines about Hinduism and how he had articulated them in this book, refers to the essence of it.

Hinduism was designed to be a philosophy, a way of life; it was never intended to become a religion but it inadvertently developed into one. It is one of the simple of religions; if you wish to cover to Hinduism you don’t have to perform any rites, you merely declare yourself as a follower of the faith. The Hindus believe in Karma. And reincarnation. …

Same way, when talking about the name of a place, he goes into depth and shares:

“Saket” in Sanskrit means “a place close to heavens”; why then did this area warrant a 17-acre District Court for criminal proceedings is an irony lost on everyone. …

He weaved in religious references at many places, for example:

Justice. It isn’t something humans are capable of dispensing. That’s Shiva’s job. …

Remember Shiva does not wish for apocalypse, He does not destroy because He wants; He destroys only when there isn’t any other option left to exercise.

And, the philosophical lines like the following, are rare to be found in the crime thrillers.

Heaven and Hell are both on earth. You choose where you want to end up. Do not even carry any belief other than this. This is it. This is life.

The references are not limited to religious stuff only. When talking about a house, the author goes into some technical details also.

The entire house and the surrounding area were covered by ANG 2000, a powerful counter surveillance device designed to beal all wired microphones inside walls and floor. The formidable masking system injected noise to defeat any eavesdropping devices that banked on acoustic leakage.

And the same continues at many places:

See how interestingly he put in a reference to the most popular file format for digital images here! The character-defining lines in the book are equally interesting:

He ran his court like a high school class. Discipline and subservience were appreciated. No, not appreciated, expected.

And when the protagonist of the story receives a call from someone caught in the tragic situation, he knew that:

… One didn’t come rushing to a criminal advocate if one’s wife was in labour or when one won a fucking lottery. … no one called up a criminal defence advocate in a happy situation, but a client in trouble always paid double. …

The author doesn’t compromise when choosing words. And, sometimes it makes the things for “adults only”. The protagonist knows his job very clearly:

… there was a big difference between being innocent and being not guilty. That difference, in legal parlance, is called evidence. Not being guilty set you free; the world can only point fingers.

When reading this book, you cannot stop noticing some fantastic references mentioned in interesting ways. For example:

Who can think of comparing just a small gesture with something related to a political party? Interesting wordplay. And he doesn’t shy away when it comes to sarcasm.

…women advocates and assistants had a dress code for court attendance, but try telling a woman advocate how – or on this occasion how long – the dress should be and the feminist would love to turn you into mincemeat.

While reading the book, you will notice some interesting words, like:

Such things make your reading experience more interesting. Here are some more:

… the moon took over the daily duties from the sun.

Memories are like 5.1 surround sound – when they are switched on they come from all directions.

At the same time, you will find references to many real-life incidents that are related to the particular scene or incident in the book. For example reference to the famous OJ Simpson’s case.

Here are some interesting punches you find in the book:

A politician was first among equals.

Given the heat they generated, it was surprising the weather channel hand’t made an appearance.

Bureaucracy has its own pace; at most times it can shame a snail.

Rag kills all reasoning. So calm down.

Sad, but true, that bad newsflash always got better coverage.

Shame is one of the hardest emotions to come to terms with and to accept.

Truth is such a bastard. It always gets out at the most inappropriate time places, without any warning.

.. the Devil is a bullish buyer and a fierce negotiator. How much you seel your soul for first time around depends on – and only on – how hungry you are.

I like the way one of my favorite movies, is referred to in the book :).

The two marched out like Twins: Arnold Schwarzenegger and Danny DeVito, except that Jay wasn’t bald or round.

Here are some more quotes from the book that give you a fair idea about the quality of writing you can expect in this book:

I have no problems or issues as you might think. I was poor once put poverty does not qualify as illness.

Poverty is a wretched thing, Jay. … I hate poverty because it robs people of the basic human emotions too.

The trouble with all tragedy is that it overwhelms all objectivity; when objectivity returns, the mind finds central pieces of the puzzle missing.

No one envisages risky activities can occur in the most conspicuous places. They do and they prosper and go unnoticed for understandable reasons: who would dare?

Love is very much like law: simply not knowing the law does not mean you aren’t reined in by it, …

When reading the book, especially the climax, you may want the things could have done differently. That works in two way for the author. One, you are attached to character(s) emotionally, a success of the author; and two, this is how the real-life goes. In life, you don’t always find the things go as they should. That makes the book realistic.

In fact, the characters in the book are not pure black/white. They have shades of grey, and that makes them real. The book talks about the flows of the system and at the same time wrong doings of the characters as well. And, no matter how and why you did it, you need to go through the consequences of your “Karma”, is the philosophy the book tries to convey. And, I found it doing quite convincingly.

The book has some proofreading errors, that is the only downside I found in the book. Here ae some example:

He wasn’t wont to chasing clients after the case.

I also found that instead of (‘) and many other characters, (>) is printed. Maybe a side effect of find-replace in the word processor or text conversion.

I have tried to keep the review as much spoiler-free as possible. But, hope you got the essence of the book.

Overall, a nice thriller. If you love reading thrillers, you should go for it.