Here on the ThinkerViews platform we love to explore all genres and popular entertaining stories. While there are heaps of books and TV shows targeted at teen girls, teen boys also have a lot aimed at their minds and their pocket money – be it video games, computer games, television and web shows and good old fashioned adventure books.

A few months ago we explored the series featuring teenage alien superhero by Pittacus Lore:

Looking at the adventure genre, we have authors like Deepak Dalal with his Vikram-Aditya series:

And in the ever intriguing world of sleuths and spies, we have Feluda mysteries.

One of such widely successful teenage hero is Alex Rider. Created by Anthony Horowitz, this series has more than a dozen books, one movie and a popular TV series featuring the teenage spy star of MI6.

While there is so much to choose from, we thought we’ll binge on the whole adventure series from the start, and picked up the first book of the series called Stormbreaker… 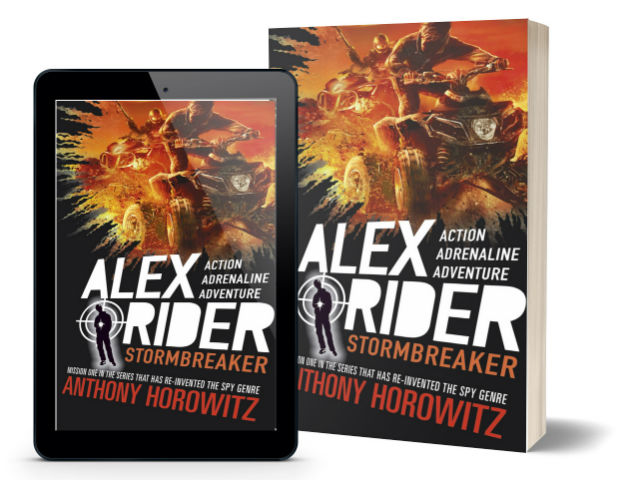 As you can see, the cover page of this book may remind you of that of the old day thrillers. While the major part of the cover shows sketches of various action scenes from the book, the illustration of a person standing, being seen from a gun telescope near the title, makes it more intriguing.

The color scheme uses some eye-catching colors like red, yellow and white while the background of the bottom half is really dark.

The book starts on the night that fourteen year old Alex receives the news of the accidental death of his uncle Ian Rider. Alex’s parents passed away long time ago, and his quiet, unassuming uncle Ian was all he had in terms of family. As Ian spent a lot of time away as part of his “banking” job, a young American lady called Jac looks after Alex. But now with Ian gone, both Jac and Alex are lost as to what will happen to them.

And then Ian’s employer Mr. Blunt shows up at the funeral. Things are getting mysterious. When Alex comes back to the house after the funeral, he finds that his uncle’s home office has been unlocked and all his stuff is gone. Following a hunch, he finds Ian’s car in a wreckage yard and discovers that the car is peppered with bullets. No accidental death then. Ian Rider was murdered.

Alex himself barely survives as Ian’s car is put through the wrecking machines. He makes it to home only to receive an invite by Mr. Blunt to visit him at the bank where Ian Rider worked.

Alex has a few surprises waiting here:
One, that his uncle was a spy at MI6
And
Two, MI6 wants him to carry on the mission his uncle was working on!!!!

While Alex is intelligent, athletic, trained in Karate and well-versed in a few languages by the uncle who was grooming him for exactly the same thing without Alex’s knowledge, he certainly would not have expected Alex to become a spy at the age of fourteen.

Naturally, Alex refuses. But Mr. Blunt and company threaten to take all his money away and send him to an institution. Left with no choice, Alex goes to a training course for a few days and then is sent on to his first mission.

His target is called Herod Sayle – a classic rags to riches story. And now in a great philanthropic gesture, Herod Sayle has promised to provide free computers to all schools in England. Not any simple computer either, his brand new invention called Stormbreaker.

MI6 thinks there is something fishy here and so they sent Ian Rider to investigate. He had made a breakthrough and was on his way to London to report it, when he got murdered. Now Alex arrives as Felix – a computer whizzkid who has won a few days at the Herod Sayle enterprises for an early go at the Stormbreakers.

Alex arrives to this strange place full of traps and tricks and finds himself out of place right away. Soon enough he finds himself in one dangerous situation after another.
Will he actually survive where a veteran spy like his uncle couldn’t?

So as you can see above, it feels like there is a fair bit happening, but the great thing is that this is a very compact story. The language is simple and the story is fast-paced. The thrills keep coming one after another and there isn’t much emotional analysis of anything that happens. Alex is a charming boy who just takes what life throws at him and makes the best of it.

What I like about these books is how they highlight that it is important to have life skills and a sense of adventure while you may have to cram for your exams day and night, it is the practical skills that may come in more handy in the real world, especially when you face unforeseen challenges. While most of us have a sheltered life with parents who constantly remind you to study hard at this age, it is always good to have a balance of social skills and ability to survive in the day-to-day world if you suddenly were on your own.

Even basic things like biking gives young people a means to independence – next to it is the ability to travel safely and capably using public transport if you live in mega-cities. Alex has had the good luck to travel, but learning new languages is another way that you can enhance your understanding of the world and the ways it works. Alex doesn’t have any close friends, but I think if he had a best friend, he probably could have found it easier to navigate the life after his uncle’s death.

Neverthless, he carries on the best he could in whatever circumstances he finds himself in. He is hurt a few times, but picks himself up and never quits. Sometimes it life you find your own limits only when you are put in difficult circumstances by no choice of your own. The world has changed since the golden era of spying and the author shows that very cleverly. Alex doesn’t get into this life by choice, he is pushed into it:

It was a question of loyalty. In the old days, spies had done what they’d done because they loved their country, because they believed in what they were doing. Nowadays, the spies weren’t employed. They were used.

I enjoyed the book and you’ll too if you are after a few hours of blazing boy’s adventure.