David Baldacci is the best-selling author of multiple series of books featuring the detective and crime fiction for adults as well as some stories focused on young adults.

In 2018, he introduced the readers to his latest creation – FBI agent Atlee Pine. With two books published in this series, she is loved by readers. We liked the unusual protagonist, the good mix of contemporariness and classic in the tale and best of all a handy audiobook format to make it an easy to read experience while on the go. So, here are my views on the first book of the series – Long Road to Mercy, on behalf of Team Thinkerviews.

Let us take a look at the cover page of the book. As being an entry point to the virtual world explored within, it creates the first impression of the book and is responsible for many purchase and/or reading decisions. 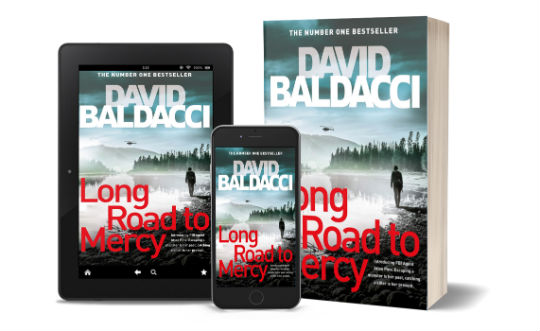 While the cover page of the very first edition of the book was not that attractive, this one is really impressive. You can see a person enjoying the walk on the beach and in the background, there are trees and hills too. A mesmerizing scene for sure. And those who love to pay attention to the details will also notice the chopper flying and many other details which makes the cover page richer.

We meet FBI agent Atlee Pine as she approaches the most crucial meeting of her life at the most secure prison location in America. Atlee has travelled across the country to make this meeting happen. She is here to see one of the most notorious serial killers in America – Daniel James Tor, and Atlee is here to ask the question – where is Mercy? Her twin sister, kidnapped by Daniel James Torr at the age of six. The answer, however, is not forthcoming.

Atlee doesn’t even make back to her station – Shattered Rock, Arizona – before she is called out to look at a dead mule in Grand Canyon. Someone had not only killed one of the ranch mules that tourists ride through the canyon, but also carved initials J and K on it. The tourist that was riding the mule – Benjamin Priest – has gone missing without a trace.

we learn about Atlee Pine’s world, her relationship with her admin support Carol Blum and the general layout of her life, her athletic prowess, her almost Olympic performance in weight-lifting and her deep-rooted grief for her lost twin, while she tries to trace Benjamin Priest and contacts his family – only to discover that the disappeared man looked nothing like the real Benjamin Priest.

The plot thickens as Atlee’s superiors get involved in a dead mule and suspicions start to stir in her brain, when her bosses warn her with an instruction to keep eyes in the back of her head. She also discovers that her computer has been hacked.

She makes contact with Benjamin Priest’s brother Edmund Priest and is successful in flushing Ben Priest out for a meeting in a diner. Before she can learn much though, the SUV carrying Atlee, Ben and Ed is rammed into and Atlee ends up in hospital. There is no trace left of the Priest brothers, and the only clue Atlee has is a memory of military chopper at the place of accident. Atlee is asked to go on leave and not investigate the “accident” any further. In her own words:

I was almost killed by what appeared to be my own government. They guy in charge of the National security Branch is on the case’s email thread. My uber boss just told me that he has been chewed out by his boss, and told me to go take a vacation.

Instead, Atlee creates a false trail for the FBI and others who want to track her and takes off with Carol Blum to Virginia to figure out who Benjamin Priest was and who was he working for.

While Atlee and Carol make a good team, there are too many enemies and too many unknowns – Russians, North Koreans, and Americans – all hell-bent on stopping them.

What is the big secret? Will she succeed in uncovering it and will she survive doing it? And Will she find Mercy?

The book does not disappoint if you like crime thrillers, action, chases, spying and conspiracies.

It has all the entertainment factors here – a good heroin, a clever supporter, big, scary villains who want to destroy the world, a love interest on the side, nuclear weapons, hi-tech spying, and America trying to hold its place as the World Leader. In the last few years, there have been numerous speculations regarding the Russian influence in American presidential elections, the sudden change of heart of the North Korean rulers with regards to their nuclear policy and America’s role in peacekeeping around the world.

David Baldacci has taken these theories and put together a plausible story that touches on many of the above mentioned aspects.

In Atlee’s character, he has put enough strength and background to give us a few books as she comes to terms with her past while battling the bad guys in present. Carol Blum is an excellent supporting character and balances out Atlee very well. Sam Kettler – an ex-army guy dealing with his own demons while working as Park Ranger in Grand Canyon has the same potential as Atlee’s character – good fighter for the present but baggage to carry and so on. On the big canvas of the Grand Canyon and the serial killer country, these characters can go on to give us some really good adventures and I am sure the fans are looking forward to it.

As mentioned above, I listened to the audiobook version published by Bolinda and read by Brittany Pressely and Kyf Brewer.

They do a good job, although I wish they had made Sam Kettler sound a little less heavy-hearted. While the paperback is not cheap, the audiobook is available for free on Amazon Audible (as a part of Audible trial package) https://www.amazon.in/Long-Road-Mercy-Atlee-Pine/dp/B07F15RVWS/ref=sr_1_1?keywords=long+road+to+mercy&qid=1578021597&sr=8-1.

Here are some quotes from the book that we liked:

The mind could really accomplish anything, especially when it was playing tricks with you…

She had heard that your work should not be your life. Yet without it she would have no life.

Justice wasn’t about the greater good. It was about what was right and wrong on an individual basis. Person by Person. Because if you neglected the people, the idea of a greater good was a pipe dream created by those whose idea of the “greater good” almost always tended to favour themselves and people like them.

The setting of Grand Canyon is majestic and the author gives us a good tour of this one and only natural wonder in America and the challenges it throws at humans visiting it. It will give you a good glimpse in these wonderful locations and maybe add it to the places you’d want to visit someday.

Not only it is an enjoyable adventure, you may also have fun predicting the dialogues and sequence of events that are so typical to such stories :). The dialogues will give you a few laughs and chuckles and in spite of some really dark moments, we know the goodwill triumph in the end.

The Road to Gandolfo by Robert Ludlum | Book Review