Posted by: Editor December 24, 2021 in Books, English Leave a comment

While popular fiction has well-established expectations of a particular genre, the niche readership, the assurance of a familiar author’s words like a comfort blanket for the fans, an author starting out the publishing journey have the freedom to create something new with no set future for how the book will turn out. But more often than not, authors write their first books from their personal experiences and worlds they know.

We have explored many works here of authors who are second-generation immigrants, writing about the cultural clashes that enveloped their years growing up, e.g., Jhumpa Lahiri. Such books are a good way to paint a picture of the world that is growing more diverse and multi-cultural with time.


Recently, I came across author Nikita Lalwani‘s debut book Gifted. Published in 2007, this book tells the story of an immigrant Indian family living in Cardiff, UK of early 1980s. The book was short-listed for the Costa first novel award and long-listed for Booker prize in 2007.

So, let us delve into this world of gifted children and share our views on it with you.

We believe in not judging a book by its cover. At the same time, we also acknowledge the influence of a cover page on a potential buyer and/or reader. It is obvious that the book with an attractive cover page succeeds in caching the attention from a stack of books. 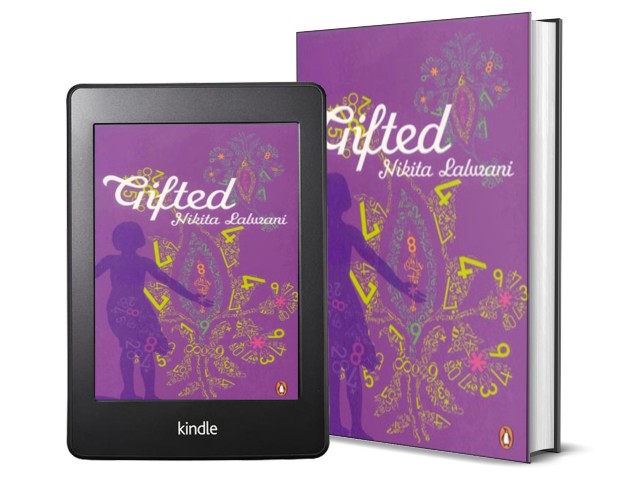 The cover page of this book is very simple. It uses the pink-purple and white colors for the major part. The design tries to emulate “gift wrapping paper”. In that way, the cover page is faithful to the book title. The illustration of a young girl – representing the female protagonist – adds to the cover elements.

Overall, a decent cover page that could have been more attractive.

Dr. Mahesh Vasi, a mathematician, came to UK in 1972 to earn his PhD with full scholarship, “five pounds in his pocket, bare-toed and shivering” in his own words. He was newly-wed at the time and his new wife Shreene started their marital journey in a student bed-sit, visiting libraries to learn this new world they were thrust in. Soon, they had their daughter Rumika and when Rumi was five-years old, the school informed them that she was a ‘gifted mathematician‘.

From that point onwards, the life in Vasi household has focused on Rumi‘s study of mathematics. Routines are drawn for her to devote hours and hours every day to this area of her life with an end goal of achieving an entrance to prestigious academic institutions along with other child prodigies.

For Rumi, there is the world of school – playground politics and discrimination, not being able to make friends as easily because not only she carries a different cultural heritage, is dressed by parents who lean towards frugality rather than immerse themselves in debt and is considered geeky due to her prowess with Maths. At home, she feels that her father has a complete control over all aspects of her life, especially her intense studies. By the time her younger brother Nibu comes along, Rumi is getting quite lonely.

Her loneliness grows as she prepares for more demanding examinations that require rigorous work. Her feelings start to grow more and more confused as she approaches adolescence and sees her contemporary kids start exploring romantic adventures, while her traditional Indian parents are clear that she is not to get involved with boys until she is married.

After years of hard work, she does achieve the goal of being accepted at Oxford at tender age of fifteen. But, is she really prepared to become the part of an adult world? She has the ability to work at Mathematics in league with older children, but what about social life?

Although I have briefly outlined the story above, which is interesting in itself, the book draws its strength from the rich and detailed narrative. For example, we meet Rumi when she is nearly ten years old and she has made an entry into her diary about how she wanted to just play with her schoolmates, but needed to wait outside one of the girls houses, while the girl checked if it was “Ok” for a “coloured” girl to come inside. In that one scene, you see her longing to have friends, to “fit-in”, but also her innocent response in being treated like this. You can see already the established patterns at her school which will make an outcast of her on the playground, due to her ethnicity.

In India, it is so common for us to celebrate the brainiacs and academic achievement, the Western civilisations seem to have a “never-ending” trend of labelling students as ‘geeks’, ‘nerds’ and other such terms if they display above average intelligence. While they are provided support and nurturing by the educations institutes, they also have trouble fitting-in. So, Rumi has to deal with the double jeoperdy of not only being ‘coloured’ but also ‘gifted’.

Her parents are so different from others in Cardiff, their way of parenting is so different, their expectations of Rumi so high that she feels more and more at sea to navigate through her days. And while seeking escape, she is also seeking acceptance:

I’m moving to a country where people laugh and have fun and aren’t cruel and rude and don’t make a joke of you, and where they are more intelligent than people here, especially at Maths like me. And I’m never coming back. And also, by the way, my mum and dad say that British people stole all these stones from people in India, the rubies and diamonds in the precious buildings, before they stopped ruling it, and that represents how they stole the sparkle out of Indian people’s lives. So it doesn’t make much sense for me to live here, to be hones, because I don’t agree with it. I’m gong back to where I came from.

But she also has enough of her father in her to seek success and challenge. The glamour of being an acclaimed child prodigy has its own pull. On her trip to India, she comes across the story of Shakuntala Devi, one of the great mathematicians of her time and how her achievements were belittled by the Western world and whose achievements carry the following lines in the Limca book of records:

Researchers will realize that their amazement and amusement should lie not in the outstanding excellence of any human mental performance, but in the rarity of similar performances.

And the fears that also haunt all brilliant minds:

No mind-wrenching discovery of prime-number theorem by the age of fourteen, like Carl Gauss. No terrifyingly brilliant paper on conical sections , like the teenage Pascal. When her brains leaked out they would just be a sugar-coated variety of normality, the same old arithmetic and geometry. A cheap buzz of numbers and symbols that anyone and everyone could memorize, given enough time and imprisonment. End of story.

It is Rumi’s story and it is her loneliness that comes through the book, but it is also the loneliness of grown-ups. Mahesh has one close friend and even he is often not on the same page as this self-made immigrant who will always be driven by past and heritage, who will always believe that it was more important to work hard and consistently rather than relying on the giftedness.

It was possible through strength and discipline to create your own destiny using the power of thought: through marks, percentages, papers, exams, numbers that had added up, to a big sum in small hands.

I am not orchestrating anything. I am merely helping Rumi to fulfil her potential. And if she wants to be taken seriously in this country she will have to do a lot more than just fulfil it, you can be sure of that. But even when you are in a minority, if you apply yourself you can achieve anything in life. However difficult it may seem.

Shreene, who never wanted to live abroad, is now responsible for a family in this country that is so different from the one she grew up in, her workmates finding her just as unfathomable as Rumi’s schoolmates find her. The responsibility to instill the Indian cultural values at home, while preparing the children to be successful in the world outside home is no easy road. And then on top of that, to be judged, in front of the public eye seems like the end of the road for their little family:

They were Indian people. Did they have to justify their origins? Their beliefs? Start from the beginning now with these people – when they had finally begun to let down their barriers? As through it was so simple, like a times table. The soul, the spiritual nature of sex, life-partners, commitment, marriage, families, purity of thought and action, society, Hinduism, karma, the next generation, children, heredity, love, you know love as a glue, the attempt to be a good person, all the basic values? Remaining true to yourself? So they could be laughed at? Just for that, so laughter could mix with their hate..

The story does not have a typical happy ending. The way a family implodes is not something to be easily recovered from. The book also will remind you of a real-life story that was in newspapers of that time. A child prodigy choosing freedom from academia just as she reached her long desired goal.

A thought-provoking story, which may lead you to identify with some of the characters, parenting techniques and of course, why it is the hardest job of all and so easy to do everything you think is right and find that that does not always lead to happy children…

One Day, Life Will Change By Saranya Umakanthan | Book Review

Chanakya In You By Radhakrishnan Pillai | Book Review