The Night of Wenceslas by Lionel Davidson | Book Review

Posted by: Editor December 28, 2021 in Books, English Leave a comment

The world of international spy thrillers remains one of the most widely loved area of literature around the world and spanning generations. Here at ThinkerviewsThinkerViews we tend to read and feature works from this genre on regular basis.

One of the widely acclaimed and not-so-prolific writer in this genre was Lionel Davidson. His personal journey is worth an impressive story itself – being one of the nine children of immigrating parents from widely different backgrounds growing up in tormenting decades of 1920s and 1930s.


Like most men of his generation, he served in World War II. And after the war, he took up the work of a freelance journalist travelling through Europe as the world was just starting to realist the new lines drawn by the the World War II forming the maps for nearly half a century of the cold war to come.

It was from his journey through Czechoslovakia that he wrote and published his first thriller for adult readers called The Night of Wenceslas. The book was well-received and won prestigious awards including the Gold Dagger award. So, let us delve into this dangerous glimpse of the past and share our views on it with you. 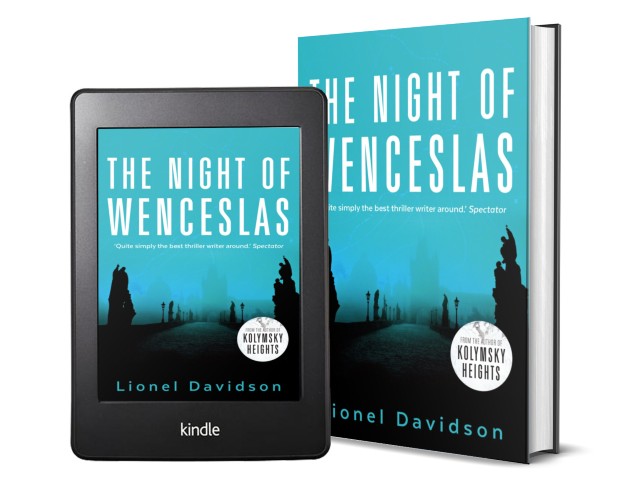 The Night of Wenceslas by Lionel Davidson | Book Cover

The book was first published in 1960 and is not very easy to find. But, in 2016, Faber and Faber published a complete set of Lionel Davidson’s works, and it was from these that we picked up this version of the story. As you can see above, it is quite a slick and attractive color scheme with use of deep blue indicating the night falling on a historical city filling up with lights.

We meet Nicolas Whistler as he tries to wheedle money out of the controlling partner of the business – Karel Nimek. The glass business was started by Nicolas‘ father, and has been left for Nicolas to join as he comes back from his stint at the university and then the armed forces during the war. Young, impetuous and not-so-thrifty, he is not managing on his 7 pounds a week and his girlfriend Maura has been egging him to get a better control of the business.

In this state of affairs, Nicolas receives a letter from Mr. Cunliffe advising him of demise of his uncle Bela Janda, and a legacy involving vast sum of money left to Nicolas. As Nicolas has expected this for quite some time, he meets Mr. Cunliffe, draws big sums of money from this legacy and starts spending.

It is only a few days later, with the first instalment gone, when he asks for more regular pay-outs. Only to find that his uncle is alive, there is no legacy, and what he has actually signed is a loan agreement, with no ability to pay back. Thus, backed into a corner by Mr. Cunliffe, he is introduced to a businessman called Pravelta, who owned and ran glass manufacturing facility in Czechoslovakia before war.

Nicolas is asked to travel to Prague and smuggle a secret formula for manufacturing unbreakable glass out of the country, hidden in a travel guidebook Nordstrum. The visit leaves Nicolas in shaky and nerve-wrecked state, but in the end he manages to get back.

Unfortunately, it appears that he did not get the right formula back. So he is forced to get back to Prague for a second visit with similar object as the first one.

But, how long can he escape the attention of the secret state police who have a reason to suspect everyone? And once trapped, friendless and out of his depth, what hope is there for him to survive?

Lionel Davidson writes relatively simple narrative, in a small book form, comprising normally a span of only few days and a few intent hours. But the amount of fear and struggle for survival he captures are so engaging, the fear of his characters so real, that the book keeps you on edge with lurking shadows of disasters around every corner, even when the characters are away from the stage of their trials. You can see why this book would have pleased the readers and critics alike.

There is no elaborate set-up, no wandering through bureaucratic set-up of secret service organisations, no big-picture or patriotic targets. Just a simple, not-so-likeable, slightly greedy young man caught in the web of his own making. And still, by the end, you do not want him to suffer any more.

In that way, Davidson was different from some of the contemporary works featuring larger-than-life spies who were written as response to call for duty. Davidson’s characters are quite modern in the sense, that they are all flawed, full of caprice and vagaries, not above lying and cheating occasionally and hardly noble. But then they have been bruised by the war which has just shunted them from one way of living to another as everything old and familiar has crumbled around them. His treatment of the Czechoslovakian characters is not so admirable though, especially his descriptions of Vlasta may come across as quite offending to modern readers.

Although the country described in this novel has been separated into two since, the setting itself is charming – the old world Prague as described below with Nicolas’ sense of Déjà vu on returning here after many years and its association with some the most memorable works of Fiction:

Prague is the most Ruritanian of the capitals of Europe. Despite the hands and brains, an aura of romance lingers over the city. At sunset lamps are lit in the linden trees on the embankment. A hundred points of saffron reflect the last light of day from the pinnacled Hardcany on the Heights. As the neon slogans begin to flash in the Vaclavske Namesti, so the turreted grey buildings and the cobbled courtyards of the old town come into their own. One feels the presence of Black Michael and enigmatic young countesses; one is no more than a stone’s throw from Zenda.

You’ll also enjoy the descriptions of the lovely baths, the bustling city life, the parade, etc. And once Nicolas is on the run and has time for introspections, the book is filled with the intricacies of the city and its alleys and streets and charming old buildings that become his refuge. As he spends time in captivity, I found how the following of his sentiments resonate so well with our experiences in isolations forced by current pandemic:

To live in a single room, waited on, one’s immediate needs satisfied, neither prisoner nor free man is a curiously anesthetising experience. I slept, woke, ate, listened, read, slept again. Over and over again, day after day. A dream-like team. Dream-like still in the memory.

Lionel Davidson’s prose is not really filled with big passages. It is usually a flowing narrative of short sentences and dialogues. However, he does make some deep, thought-provoking observations through his characters. Here is a few samples of what we liked:

When you have imagined a homecoming for so long and in circumstances so diverse and apparently hopeless, the real thing tends to be something of an anti-climax.

By end of his ordeal, Nicolas talks about taking life as it comes. Once again, as the world around us is going through so many drastic changes, this sounds like such a good advice as we have no control over events all the time, but it is how we respond that makes all the difference:

Events were mainly incalculable, their significance always dubious. If experience taught anything, it was not to think too much, but to sharpen up the responses.

A sparkling, thrilling venture into the lost world of Eastern Europe behind the Iron curtain that will take you into enjoyable journey of an amateur spy.