The Man Who Died Twice by Richard Osman | Book Review

Posted by: Editor December 20, 2021 in English Leave a comment

Richard Osman’s Thursday Murder Club is back with all the fanfare as the second installment of the series is making the same waves in selling charts as the first one did. Called The Man Who Died Twice.


The book is available for the readers around the world and here are my views on it on behalf of Team Thinkerviews. 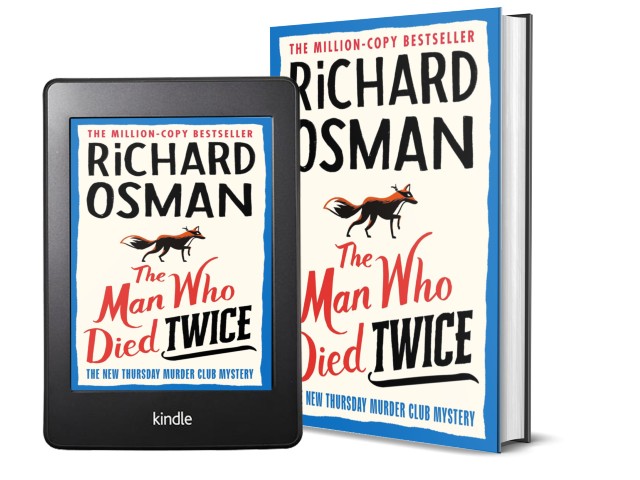 The Man Who Died Twice by Richard Osman | Book Cover

It is a simple minimalistic cover page very much in line with the first book. The beige background with blue outlined border carries the title of the book and author’s name in red, black and blue. There is only one living element on the cover page, a small illustration of a wild animal, known for its cunningness.

I like the simple cover page and the thoughtful imagination behind it.

The story picks up right where it left at the end of the first book. A typical meeting of the four friends that form the Thursday Murder Club – Elizabeth, Joyce, Ron and Ibrahim and a stakeout outside the drug-dealing garages for police officers Chris and Donna. We are back at the retirement village of Coopers Chase, and it has now got a couple of new residents – Douglas Middlemiss who has come to this place looking for a safe hide-out after stealing twenty million pounds worth of diamonds from a crime world banking facilitator called Martin Lomax. He also has an MI5 officer for his protection who doubles up as a restaurant waitress – Poppy.

Why Cooper’s chase? Well, Douglas also happens to be Elizabeth’s ex-husband and had been hearing about her adventures about catching murderers. And it is to Elizabeth that he will reveal the location of diamonds and hoping for her help in liquidating those. By the way, the diamonds belong to the mafia and they will be landing soon in UK in search of these diamonds. People will be killed, if these are not found.

In an unfortunate incident, Ibrahim gets attacked by teenage criminals, while he is on a day-out in Fairhaven. Ibrahim ends up in hospital, the mental trauma bigger than the physical injuries and the Thursday Murder Club now also has someone else to find – Ryan Baird. Chris and Donna arrest Ryan, but he is let off as there is not enough evidence.

While Elizabeth is still mulling over Douglas’ request, he is attacked one night and Poppy kills the assassin. Two MI5 agents – Sue and Lance – now start investigating this murder, while Poppy and Douglas are moved to another safe house. Douglas requests Elizabeth to meet him there. But when Elizabeth and Joyce arrive to this house, they find that both Douglas and Poppy have been shot dead.

Lengthy interrogations follow. On the other front, the Thursday Murder Club managed to get Ryan arrested again – this time in possession of cocaine. But instead of facing up the court, he runs away. The drug dealer that Chris and Donna has been chasing – Connie Johnson threatens them and warns that their loved ones will get hurt if they don’t stop monitoring her.

So there are a few people dead, the mafia and their banker will kill whoever has the location of the diamonds, there are twenty million pounds worth of diamond on loose and a dangerous drug dealer right at home… Will the dangers overcome the resilient spirits of our pensioners or will they come out on the other side with no harm?

When a book phenomenally successful as “The Thursday Murder Club“, it is bound to inspire a series featuring the beloved cast and characters. It is also a challenge for the writer to prove their merit by producing a second book that is just as good as the first one. Well, I can say that I enjoyed this second book just as much as I enjoyed the first one.

There is the old gang – which you think you know already, so Richard Osman pulls out a part of Elizabeth’s past that we do not know. And then there are additional characters like Connie Johnson, Martin Lomax, Douglas Middlemiss, Sue Reardon, Lance and Poppy. Most of them are very easy to recognize and like, with their heartaches, a sense of something missing in their lives, something to hide and wishing they could miraculously fix everything.

Setting wise, we do see glimpses of Coopers Chase, but much of the story also takes place around it – in Fairhaven and Hove.

The narrative is spritzy and things keep moving. There was only one place in book, where the chronological order didn’t feel quite right to me. I’ll leave you to read the book and find if you stumble across the same thing. Richard Osman’s sentences are laced with this ingrained sense of humour that makes you see through the situations even when he weaves serious observations and messages through.

But it is not all fun and games. Growing old is hard and gets harder as the world you have known and lived in literally your whole life is changing so rapidly. While Elizabeth, Joyce, Ron and Ibrahim take a lot in their stride, e.g, joining Instagram, paying for parking via phone app, they also find the world a dangerous place when young people are raised to be self-centred and cruel. Let me share some of the observations on the human nature that pepper the book throughout:

One way or another, things catch up with you.
There is no point moping, you get the life you deserve.
People just want to turn upto work and do their job and not be reminded every five minutes of what they look like, or who they slept with.
No animal is better than any other animal. We are all just a collection of atoms smashed together. Even people. Even trees.

And then there is loneliness. This is something that everyone is facing – Elizabeth with Stephen’s dementia, Joyce with her efforts to match her daughter Joanna’s world to hers, Ron connecting with a grandson and Ibrahim going into his shell after the attack. There is Chris, finally finding companionship with Patrice, but Donna is struggling with being alone. The conversation between Ibrahim and Donna is one of the best bits of this book:

Everyone goes through tough times? Everyone feels low? The don’t go bleating all their troubles to a psychiatrist. They cry on shoulders of their mates.
The biggest mistake of all is to forget to live, while you hide away, safe and sound. The decisions you are too cautious to make, the loves you are too timid to pursue? Many lives you miss along the way…

So, upwards and onwards they all keep going – chasing murderers, meeting international criminals, drug dealers and spies, expecting double bluff and deceit around every corner.

Another absolutely delightful murder mystery featuring the spunky pensioners and their dependable friends.