Have you ever tried exploring your way of living from a foreigner’s perspective? If yes, then, you must have found it strange. Based on the place, environment and social setup we get a chance to grow up and live in, our personality takes a shape. Outsiders may find it strange, but then more often than not, the feelings are mutual, right?

We were Finding Arun intrigued by the book title Finding Arun by Marisha Pink. We wanted to explore the story and curious about “how the author has explored the foreign and Indian cultures?”.

Book cover plays the role of a gateway to the virtual world explored in the book (or for that matter, any other media); and thus is a very important part of the book. However, we must not judge a book just by its cover page, we cannot deny its influence on many reading and/or purchase decisions. 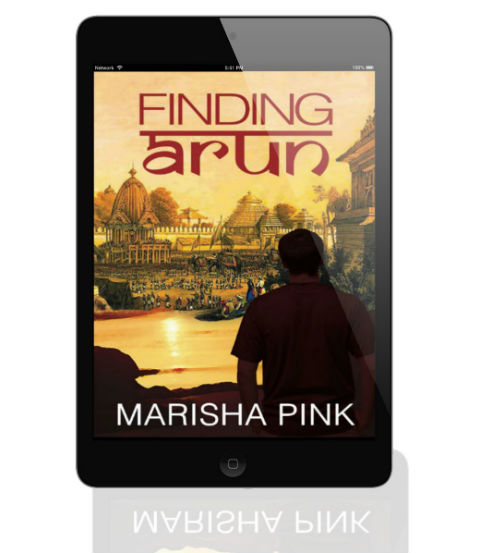 Finding Arun is a story of finding one’s roots, one’s true self, one’s real identity. As you can see, the cover page of the book is quite interesting. Being grown up in London, the protagonist explores India and Indian culture mostly from Puri (a town in Odisha, a famous place for pilgrimage for Hindu Devotees). The cover page shows an illustration of a traditional Indian pilgrimage place. You can see a water body and in the background, you can notice the Jagannath temple. A very authentic and interesting illustration.

Overall, I like the design of the cover page, including the choice of colors.

In London, a lady met with her death. The world turned upside down for her son Aaron. Of course his father Arthur and aunt Ruby feel the same void. However, being mature persons, it is comparatively easy for them to keep themselves composed, at least from outside. Aaron is an introvert teenager who doesn’t like to socialize much. His repo with Arthur was also out of sync. It would be better to say that there are not speaking with each other unless it is extremely necessary. Arthur tried his best to break the ice between them, but, Aaron found it difficult. Aunt Ruby is an anchor for both of them.

When cleaning up his late mother’s study, Aaron found some letters from an unknown lady from India. The lady was found pleading to his late mother to let her see her son once! Who is the lady? And, who is her son? Did his mother know about them? Why hadn’t she allowed the meet or provided more details about the son to the lady? Why his mother never uttered about it to him, or even Arthur (Arthur was also unaware of any such information).

The boy Kalpana (the lady who wrote letter(s)) was referring is Arun! Who is Arun? Are Aaron and Arun are the same person?! Is it why his physical appearance resembles more with the people from Indian ethnicity living there?

Aaron decided to find the correct answers. And, what is the best way to get them if not visiting the lady in person? Well, he needs to pay a visit to India for that. Aaron grew up in a typical British environment and hasn’t visited a foreign land like India so far. Will he actually visit India? What will he find here? Well, the answers are better to get from the book :).

Most of the incidents in the book take place in Briton and India (especially Puri and nearby villages). Over the course of the story we meet Aaron, Arthur, Aunt Ruby, Hanara, Lucky, Kalpana, Rajubhai Joshi, Naresh, Chandani, Prakash, and others.

As said earlier, the book explores the journey of a person who tried to find his root and it goes through a cultural crossover. If such books interest you and if you would like to explore the Indian way of living from a foreigner’s point of view; this book is a worthy choice.

The author has an interesting writing style, and you got to know it from the beginning of the book.

Being a textual medium, storytelling through books challenges the author when it comes to depicting emotions. Marisha has done it beautifully at various places in the book.

You may disagree with various points of view about Indian way of living explored in the book, but, you need to remember that it is seen from an outsider’s perspective. It would always be different. In fact, when we view foreign countries and their way of living, we will have our own perceptions. In cultural crossovers, actually this is the main element. And, the author tells in the book itself (via a character):

The book contains some really thoughtful lines about love.

When you love someone that much it’s hard to watch them waste away before your eyes, to watch them become a mere shadow of the person that they used to be.

When Aaron comes to India, he sees a totally different lifestyle than what he has been living so far. Of course, there are a significantly high number of people living in the same geographical are when you compare the population of India to the same of Britain. More importantly, India has geographical versatility too. From snow-clad mountains to burning desserts, from green plains to coastal areas, you see a large number of different geological situations (and thus lifestyles too). People here love to wear colorful clothes, live in colorful houses and enjoy the festivals and live their lives in a cherished manner.

Of course, sometimes you consider it as an attack on privacy, but, it is strong bond of humanity and care which keep people concerned about each other. The situation is different in megacities these days, as they started losing the warmth. Some villages and small towns have still maintained the original charm.

He couldn’t understand the driver’s apparent fascination with his life; taxi drivers in London were rarely interested in anything that he had to say.
…
… his head remained wary of the hygiene standards that might have been used during their preparation. …
…
… Life seemed simplistic, yet wholly satisfying for the people beyond the train. They had nothing compared to what he had back home, but as they went about their morning rituals there was a contentment evident that was rarely found in the miserable faces of London’s busy urbanites.

Within the space of five minutes, Arun had shaken more hands, learnt, and forgotten, more names than he had in almost twenty years, but the buzz that surrounded his arrival, and the warmth and enthusiasm with which he was welcomed, made him feel somewhat like a celebrity returning to his home town.

The book has some sarcasm and verbal fights that you will enjoy reading.

You will enjoy reading the exploration of the “Jagannath Rath Yatra” event and got to know a lot of things about it. You will enjoy the emotional episode of boat ride too. If you are an emotional person, the book has many incidents that make you connect with them.

… her eyes watering with the threat of tears that seemed too afraid of her to fall.

The author got many things wrong. 19 is not considered as marriageable age for youth. Leave some rare cases and you will not find such incidents. The book has some such limitations.

Actually, there are more quotes I can mention and more attributes of the book we can talk about. I want to avoid them intentionally. The main aim here is to avoid as many spoilers as possible. And, the quotes above mentioned are good enough to give you a fair idea of what kind of writing you can expect from the book.

There are some life-lessons the book is conveying through simple yet effective words. If I need to choose only one small block of writing from the book, I would love to settle with the following:

… the more that he thought about it, the more he realised that even money couldn’t guarantee anyone a happy ending. People, not things, were what counted and when it had mattered…

The journey of the protagonist is inspirational. Ignore some superlative stuff and coincidences, and you will find the touch of reality in the book.

Overall, an emotional and moderately good book about self realization and cultural crossover. It has its own limitations, but a serious reader will find it interesting for sure.