In today’s world where a huge part of the world population uses a smart device – whether it is a laptop, a tablet or a phone – IT security is hammered through at many places. And still, we find that phishing attacks are successful, people do fall victim to clever scammers and the privacy and security of personal data is only an illusion. We see very often in the news how the UID details are leaked, or we read about clever identity thefts and cloning of credit cards is never-ending. As great as the digital world at our fingertips is, it is also where we all are vulnerable. Imagine then what havoc could be caused through digital means.

Browsing through the Kindle books, recently we came across a book called Operation Maya by Girish Venkatsubramanian. The premise was intriguing and in line of the thoughts expressed above, we decided to read the book and share our thoughts here on Thinkerviews platform.

Let us take a look at the cover page of the book: 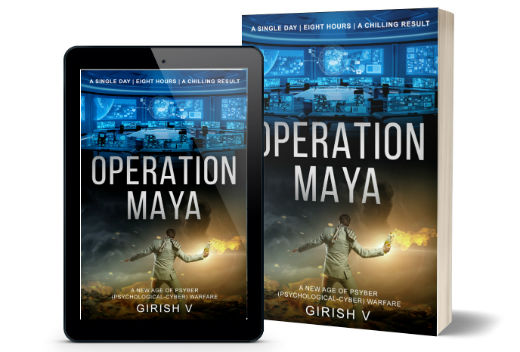 The cover page of the book is quite attractive featuring futuristic control panels in the top half and a suited professional throwing out the flames that will turn the world around him to ashes. With taglines like “A single Day | Eight Hours | A Chilling Result” and “A new age of PSYBER (Psychological-cyber) warfare“, the cover page is sure to attract the attention of all readers interested in futuristic battle stories.

It is December 14, 2022 – D Day– and we meet a victorious team consisting of a computer scientist, a psychologist, a hacker, a banking expert, an anti-virus specialist, a soldier along with an able administrator. The jubilation, however, is very short-lived.

Looking back to early September, 2022 we meet Girish who has just come back to Bengaluru from a well-paying job overseas that has turned mundane and repetitive, in search of the spark and passion of a new start-up. He catches up with an old friend Dr. Jacob – a renowned psychologist who introduces Girish to common friends Neha, Prasad and Aditi.

Girish finds Aditi very attractive, and when a potential job for the Indian military comes through Aditi, he is quite keen. He visits the ‘Strategic Center for Advanced Research (SCAR)’ headquarters located in MM Hills outside Bengaluru. Soon, he takes on a contract with SCAR to work from this state of art facility. The job is to:

Help the military build potential scenarios where India might be attacked through advanced technological tools and provide solutions to counter-attack or defend the country.

Resources are not an issue and so soon Girish puts together a great team that works out a very clever game plan to launch a serious attack that will cripple an entire nation. Their military contact arranges for them to pit their scheme against an army supercomputer which will simulate the responses to such attacks, and so the game is played on December 14, 2022.

The results are devastating in their impacts – including unforeseen ones.

But was it really a game? – After all, it is Operation Maya…

Like many readers out there, we also love sci-fi – books, tv series, movies, etc. And also share updates on the technical news here from time to time. Operation Maya is set in 2022 and although not so far in the future, it is enjoyable in terms of how the nature of warfare is changing in the changing world. The author does a good job of setting up the book in a metropolis which is sometimes considered the technology hub of India and bringing characters from uncommon fields of life whose work usually remains in the background i.e, experts who test social media software for weaknesses, or design banking software. The protagonist himself is a ‘thought leader’ in defense technology and a good study of human psychology. These are the people who protect the general public from a lot of IT attacks, keep our money safe and make our life easy in general through safety measures when we use the internet.

It is a great time for young, enthusiastic entrepreneurs who are shaping the modern India. As the author says:

We are at a unique inflection point in India’s history. We ARE witnessing history as we wake up every day.

Everybody in the world would love to get a chance to make history. They would like to change the world for the better.

And hence it is plausible that a group of such people can also design an offensive -heavily using digital technologies – that can be the end of life as we know it. These are logical people and so is their game plan. It is built from one step to another, interlinked and has feedback loops. The author explains many popular terms and also creates a few new ones as we go through various stages of the battle games:

For example, the first step of the games is The Trojan Horse:

The virus would spread through social media networks and instant messaging software. Whenever anyone posts a message on those software, we would attach an image to the notification their friends or contacts would see. We will use a method called steganography to attach the virus code to the imaged and use a loophole in the operating system that would install the virus when the image is viewed.

Or as they create a stock market crash:

A plunging market ensured that all small time traders and investors tried to get out by selling whatever they had on their hands. It was like a pack of dominoes falling. One was toppling down the other and the circuit breakers were not holding them ack. The whole trading economy became a vicious madhouse. It was a virtual bloodbath on the stock market.

A zero day exploit is a cyberattack that occurs on the same day a weakness is discovered in software. At that point there is no fix available. Hackers use those loopholes as soon as the details are released on the dark web.

It is typical for mobile networks across the world to slow down the available bandwidth if a spike occurs in data usage in a particular area. This is a mechanism used by the networks to stop hacker attacks.

We are all warned many times about how the social media has a lot of negative effects when it is used constantly and without limits. It can become not only an obsession, but also can lead to mental health issues. The effect is especially bad on younger populace who are still in phases of brain development. Even adults put their safety and security at risk unintentionally when they use social media without being aware of the pitfalls.

It is very fitting then that the first stage of any attack that contains spreading misinformation is through popular social media. Operation Maya showcases psychological warfare, and so the author gives us insights into concepts like mass hysteria, panic and mental breakdown scenarios on large scale:

An agitated mind is prone to severe stress and after a point, they become receptive to suggestion.

I was surprised at the gullibility levels of the population towards fake news and posts. They would be unable to sift through the flood of information and would be unable to differentiate the truth from the falsehoods. I began to realise the immense power social media could wield.

In today’s era of information overload, it is indeed very hard to differentiate the truth from the lies, the facts from conjectures. And while all this makes a good background, the book emphasizes that it is usually through patriotism and appeal to the good nature of scientists that weapons of mass damage are created and utilised. Good intentions of scientists lead to disasters when used by ruthless fighters:

The difference between soldiers and civilians is that soldiers are trained to turn a blind eye towards suffering. They understand that they fight for a bigger cause and that collateral damage would be inevitable.

Although we do know from beginning how the D-day would end in some respects, the author does try to keep a few things secret, leading to a big reveal at the end, thus lending suspense thriller like atmosphere to the book and keeping the reader interested. The dialogues and languages is slightly indicative of how the book is set in future, where some expressions will be shortened from how they are used today.

The premise of the book did remind me of the film “Ender’s Game“, as in there also an unsuspecting team of children is pitted against a “Simulated” enemy which is not quite simulated. The games are all OK as long as they remain in the digital universe. In real life, they lead to genocides, and that is something all players need to remember…

We read the Kindle edition of the book with a read time of around 3 hours. The book has an open ending, indicating there might be another one following through. It would be a pleasure to read the next book when it is out…

An enjoyable sci-fi read for all lovers of digital warfare…