It is said that “Life is Stranger than Fiction” and some of the best loved literature draws its inspiration from real life. When the author has gone through the emotional roller-coster described in his book, his words carry a lot more power to connect. Author Ajay K Pandey is an example of this. His first book “You are the Best Wife” was the story of his own struggle with fate and it connected him with his readers in such a way to become best-seller.

Since then, he has continued to pen more successful books including You are the Best Friend, Her Last Wish and A Girl to Remember and recently I got a chance to read his latest book An Unexpected Gift for Team Thinkerviews. 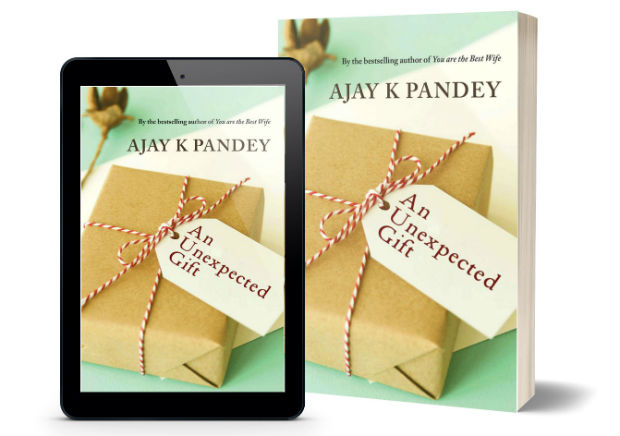 A beautiful, elegant cover page featuring a peaceful green and ivory background on which rests a simple, brown paper package tied with a red and white string. The gift tag bears the name of the book – “An Unexpected Gift”.

A true hero is one who smiles through silent pain and fights battles nobody knows about.

Abhay has been trying to emulate this when we meet him in the aftermath of his lovely wife Kanika‘s death, as he tries to manage a job, a house and raising his infant son Ayush. He has learnt to answer all the “how are yous” with “I am fine/well/good” and does his best for his son with the help of their long-term cook Mohan.

But, his work is suffering and his boss Mr. Rao recommends a baby-sitter for Ayush – Sheetal. Abhay interviews Sheetal and although she is lovely, Abhay does find her enigmatic. Sheetal starts working in the evenings and soon Abhay’s life improves as he now has a good carer for his son. Until, he discovers that Sheetal has been hiding something from him.

When Abhay finds out that Sheetal is a transgender woman, he sacks her. He feels that his trust was betrayed. But, once he is over the hurt, he realises that she was making a good impact in Ayush’s life and hires her back.

Abhay supports Sheetal in spite of Mohan’s rivalry and jealousy. As time passes Sheetal proves to be a source of motherly love and little Ayush is blooming.

The established notions of the society, however, are not in favour of a young, transgender woman trying to work in the house of a young widower.

As the pressure mounts on Abhay to let Sheetal go, he faces the hardest decision of his life… Will he be a hero that his loved ones want him to be?

Ajay Pandey’s books are known to be emotionally charged and this one also has a sensitive topic at its centre-point. Do transgender women have to accept the fate of dancing on streets, or can they choose to become educated and look for a job like any other member of the society might do. There is a lot of stigma and traditional expectations attached to people who identify as third gender and the societal norms do not change overnight. This means people like Sheetal face a lot of challenges, bullying and unfair treatment.

We may not be able to change views of the whole society overnight, but we can all make the choice to be good and fair when we are confronted with such scenario. If we can help someone, treat them with a bit of decency and respect, it may just make their lives. In this book, Sheetal is so filled with love for children and the deepest desire of her heart is to become a mother, although that might not be possible for her physically. And so the author says:

Never accept the taunts that the world throws at you. Every woman is a daughter, friend, sister, wife or mother to someone, and you are no less than anyone…

The characters here are simple and easily identifiable as someone you may have come across. They make mistakes, but also have the courage to confess and correct their mistakes. The author tells us right in beginning that this story is based on Sheetal he did meet in real life. Here, he makes a guest appearance as himself in the last few chapters of the book as someone who helps out Abhay.

There are a lot of real-life observations here which we found quite apt:

In this age of urbanisation and virtual connections, it is possible to have hundreds of friends on social media but not a single heartfelt relationship in reality.

The only real difference between stupidity and intelligence is that stupidity has no limits.

There are people who pose as victims by blaming their bad behaviour on their financial situation, family background or morality.

The author points out at many places the tendency of parents to compare their children with others and the fixed expectations of the society as well as how sometimes parents have to exercise restraint while treating their children:

The best way to deal with a kid’s tantrum is to ignore his cries and do what you think is best for him.

Too much appreciation too early in life can do more harm than good.

The author uses very simple, day-to-day language and sometimes the sentences may appear like they are translated just as we would say while talking to someone in Hindi:

We always talk good about someone when they are born or die; during the journey, we only hate.

There are a couple of continuity errors in the book e.g., when Abhay visits Sheetal’s home for the first time in Chapter 6, he uses his Activa, but later in the book when he uses a two-wheeler, it is a Scooty. Or in chapter 5, when Abhay tells us about his childhood dreams of becoming an actor, he mentions that in Class 12 he won the first prize for a play he had directed for a school competition and the trophy said “First Prize in Drama”. But later on, when his father is reminiscing about that occasion, he says Abhay won first prize in acting. Of course, such instances are not uncommon and can be attributed to perspectives. And the feelings of the characters remain unchanged nevertheless.

I read the Kindle edition of the book and I can recommend it to anyone out there who is up for a feel-good, sensitive book and has 2.5 – 3 hours of reading time on their hands…