2020 was a year of lots of shocks as the pandemic changed the way we live and interact with the world. A lot of highly anticipated and eagerly waited books did not make it to readers in the hard copy formats and readers turned to other platforms and discovered some new authors they liked.

But by Christmas 2020, new books did make it to the market and one of the biggest surprises of this lot was British TV personality Richard Osman‘s debut book ‘The Thursday Murder Club‘ which became a run-away bestseller.

For the lovers of murder mysteries it is a very attractive story set in a retirement village and we couldn’t wait to read this either. So here are my thoughts on the book on behalf of Thinkerviews. 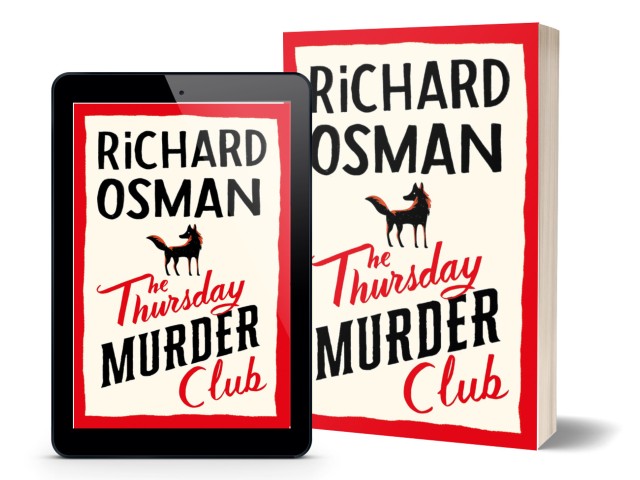 It is a simple minimalistic cover page. The beige background with reddish outlined border gives a perfect old fashioned look to the book. The combination of black and red colors used for the tile makes it impactful. There is only one living element on the cover page, a small illustration of a wild animal, known for its cunningness. And, that makes the cover page more meaningful.

I like the simple cover page and the thoughtful imagination behind it. Definitely, not very appealing.

We meet Elizabeth as Joyce lets her into their world through her diary entry. In the high-end retirement village called Coopers Chase live a bunch of people who have led eventful lives, seen success and failures and now in their seventies and eighties are brought together to enjoy the freedom of old age and new possibilities. The place is bustling with activities and clubs that try to make this existence as eventful as possible in absence of the hustle and bustle of jobs and kids. There are all the usual ones – knitting, reading, crochet, various forms of aerobics and there is The Thursday Murder Club.

Elizabeth – an ex spy – is the center of this club. Her best friend Penny – an ex policewoman – was the real reason for the club to have started. Penny had files of unsolved cases. She brought them to the team of Elizabeth, Ibrahim and Ron, and together they solved these cold cases on Thursday mid-morning. But now, Penny is in the hospital bed and Joyce slowly takes her place in the club.

The owner of Coopers Chase – Ian Ventham – is planning to expand the facilities. His first target is the cemetery and woods behind the current retirement and eventually he wants to buy the land at the top of the hills and make it a three tiered retirement community. He has always been unscrupulous and doesn’t care about protests from either the residents of the retirement village or wider community around them.

As the first formal consultation takes place for this project, Ian Ventham goes ahead and sacks his long term building partner Tony Curran. Within a few hours of this, Tony Curran is murdered in his home.

While police is investigating this murder and we are meeting a hoard of new cast of characters, the day of demolishing the cemetery arrives. There is a fair amount of friction and protestations on site, and in all this hullabaloo, Ian Ventham is murdered too.

There are plenty of suspects for the Thursday Murder Club to look deep into – from Ron’s son Jason to grieving resident Bernard, from a priest who is actually a doctor to a long-lost Turkish thug, the threads are so knotted that with each uncovered mystery, there is another forming up…

When every day is bringing you closer to death, is there such a thing as happy endings?

When a book gains popularity, it gets dissected to no end, but the beauty of it is that each book brings something different to each reader. I think the readers fell in love with this book, because it brings together the quintessential Britishness of these characters to a modern way of life. It is all here – the way they think, express themselves, make old-world comments as they see the new world with old eyes. The snobbery of the well-to-dos in the establishments they shop at, the way they treat working class people – more migrants and mixed ancestries -, the way the greed and enterprising nature of some lead to success while for others it only leads to more work is what makes these story so richly cultural.

It wouldn’t have been so many years ago that people would have preferred to live with their families in their old age, be cared for by their children as they had cared for them. But, as we live with more and more broken families, kids growing with one parent or another and a set of step-parents and half-siblings, more and more people end up alone in their old age. And this book shows how a retirement village can become another opportunity at life – to make new friends, to develop new interests, to experience new thing, if you are open to it. And of course, if you do not need to worry about money.

Everyone here knows that their days are numbered. With age, the fear of failure and inhibitions can also be gone. What have you got to worry about if you are eighty and on pills already? Saying that, the past doesn’t always disappear. You also don’t get to be eighty without having made mistakes in life, and some of them will weigh on your conscience until end of the day.

Life isn’t kind or fair to all of either. And sometimes we stumble to old age while still grieving for losses suffered early in life and never having recovered from it. Sometimes your mistakes are borne of love, for protecting family, resulting from fear of losing the life you have built and you carry the guilt with you to end of your days. You question your loneliness, your relationship with your estranged partners and children and wonder about ‘what ifs’ and wish that things were different.

But in spite of all this turmoil within, you could find a routine and spend day after day trying to solve external problems – like a murder or two – while enjoying yourself. When there is a purpose to your day, it is good to be your old self again, isn’t it? And that’s why this is a joyful book in spite of all the pain the characters go through. They are spunky, tough, vibrant and go-getters. It is so easy to fall in love with all of them – whether you like their choices or not.

Richard Osman has also done a great job of weaving so many mysterious threads together, that he keeps you guessing until the end about some of the characters as suspects. Everyone gets in the murdered slot, and like a merry-go-round keeps going around while the suspect slot is filled with a new face. The police officers are also an interesting duo and so real life like. I also enjoyed the narrative which is light and sparkly, delivering a serious tale and messages without heavy preaching notes about it.

An absolutely delightful murder mystery to get stuck into if you have a few hours on a rainy weekend..

The Man Who Died Twice by Richard Osman | Book Review