The caliber of Late Satyajit Ray as a film director is recognised all around the world. And, literature enthusiasts know him as an excellent author as well. Yes, it may come as a surprise to those who don’t know about the books of Satyajit Ray that he was an author too! He wrote many books in Bengali including the famous Feluda series for teens and young-adults.

Like authors from various languages and countries, some Indian authors are also impressed with the works of Arthur Conan Doyle, especially his Sherlock Holmes series. It is easy to draw a parallel between various pairs like Byomkesh Bakshi – Ajit Banerjee, Prodosh Mitter/Prodosh Mitra (aka Feluda) – Topshe (Tapesh) and Sherlock Holmes – John Watson. Pradosh Mitter i.e. Feluda and his team are the creation of Late Satyajit Ray.

When the content is good, it often conquers the boundaries of language and land. Feluda adventures (like Byomkesh ones) became so popular in Bengali that various enthusiast translated it in English and Hindi so people who don’t know Bengali can also read these stories and enjoy them.

While Feluda adventures are available as book-sets and short story collection books, they are also available as singles. Today we are going to talk about The Royal Bengal Mystery: The Adventure of Feluda, originally written by Late Satyajit Ray and translated in English by Gopa Majumdar. We found the book at a very attractive price during a book promotion, so despite having paperback copies of Feluda book series, we bought this story – Kindle EBook version, a while ago. 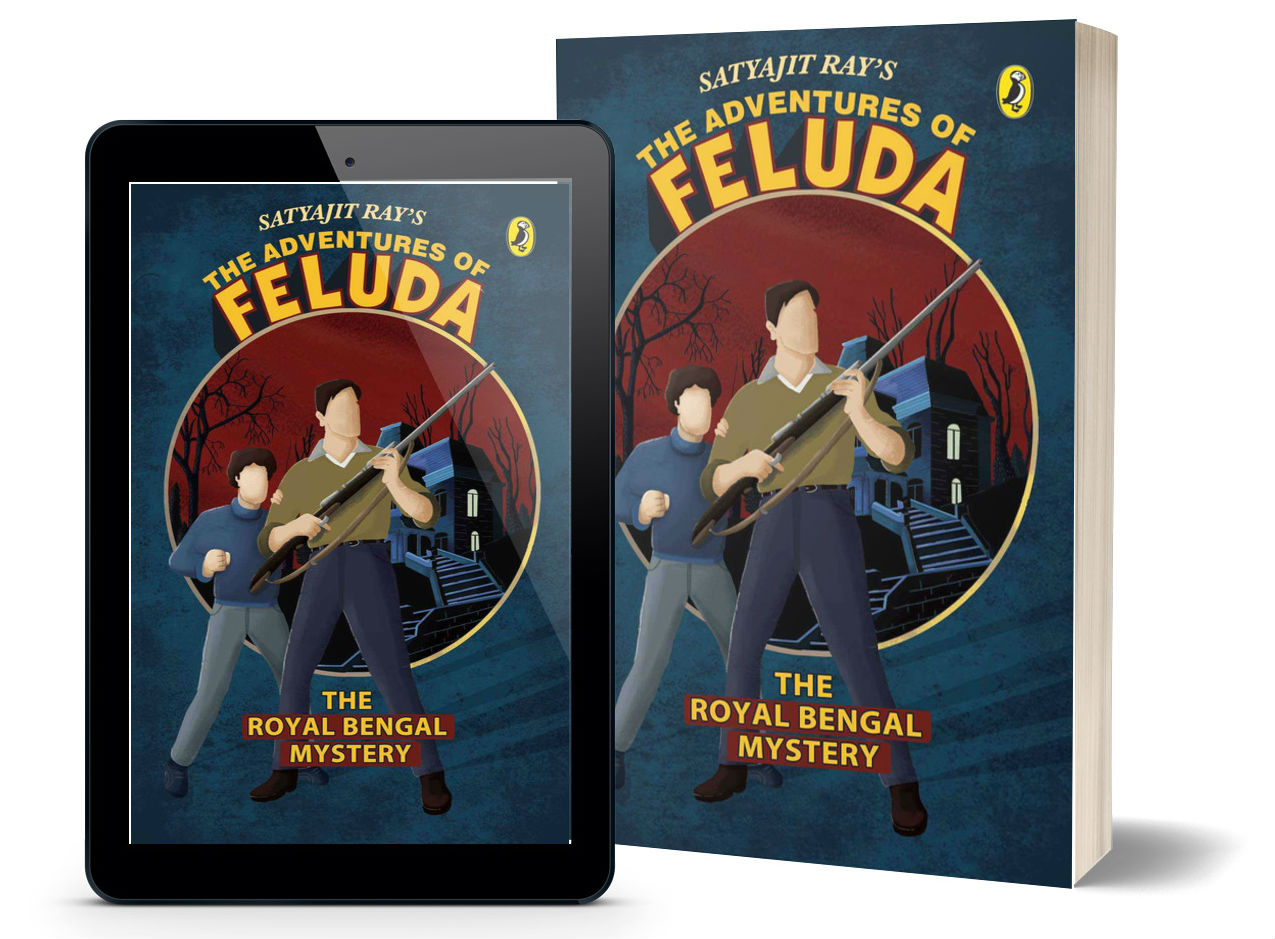 Feluda is a mysterious character. He is a courageous, well-built multi-talented young fellow and thus he is represented through an illustration where the face is blank. The same is done for Tapesh (aka Topshe). We see Feluda holding a gun, which is a significant gesture that comes towards the end of the story.

Such illustrations are good and for children’s books, they create the desired impact.

I found the cover page simple yet meaningful and a little bit attractive too.

This tale, like all other Feluda tales, is written by Topshe. Feluda advises him to start it with the riddle that they encountered later during the adventure. Feluda’s logic was, it will make the reader more curious about the adventure and found it interesting!

Old Man hollow,
pace to follow,
people’s tree.
Half ten, half again
century.
Rising sun,
whence it’s done,
can’t you see?
Between hands,
below them stands,
yours, it be.

Jatayu (i.e. Lalmohan Ganguly) is a detective fiction writer whose books are bestsellers. Feluda, however, often find chronological problems along with some other stuff and often guides him. Jatayu was skeptical earlier, but now he admires Feluda and takes his advise seriously.

Mr. Ganguly is to dedicate his next book to a well-known landlord of Jalpaiguri (who lives near the forests of Dooars which are located near the borders of Bhutan) who happens to be a hunter also. The landlord’s father and grandfather were also well-known hunters and were known for their hunts for man-eater tigers in the area. They have almost cleaned up the surroundings from man-eaters.

Jatayu is invited by the landlord to spend a few days with him in his royal residence and later Feluda was also invited to accompany him.

During their visit to the place, one staff member of the landlord is killed by a man-eater! And, Feluda was curious to uncover the truth. How he unfolds the mystery and who was the culprit is better to explore by reading this book.

I found this book quite interesting, especially for its target readers. It also lets you witness the era of that time when Dhaka and other places were not part of a different country and people (especially from Bengal) used to visit it more often. This book is a good resource to get to know more about various forests around Bengal and Orissa. People living in urban areas may not realize how tough were those days, especially for the people living around forests, as various beasts were lurking like a death-threat.

Today when project tiger and other initiatives are needed to save the tiger, they were the days when it was not a piece of very surprising news to know about a tiger becoming man-eater. Well-known hunters are then called to save the people and livestock from such beasts. And yes, when hunting of man-eaters is talked, definitely a reference to Jim Corbet is obvious to find in the book! Also, the way the book gives insights about beasts and the human psyche is amazing. For example:

He has often told me that the mind of an animal is a lot less complex than that of humans. Even the simplest of men would have a more complex mind than a ferocious tiger. Catching a criminal was, therefore, no less difficult than killing a tiger.

The language of the book is simple and easy. Rather than using heavy words, the author and the translator used the day-to-day language. And, according to me, it works in favor of the book. At the same time, the author is good to elaborate on the attributes of the character he/she talking about. For example:

He greeted us politely, but without any excessive show of warmth.

And, it is immediately followed by some of the wisdom lessons too.

Feluda has warned me often enough not to jump to conclusions or judge people by their outward behavior.

Feluda’s has eyes for details and his observations always played a key role in all his investigations. You can see his abilities in the lines like:

Feluda looked at the cot and said, “This one was probably used as a machaan. Look, there are marks where it must have been tied with ropes. Topshe, you can sleep on it.”

No matter what, the core of our nature comes out naturally. And the basic needs and routines became a part of our nature.

Despite all my mental turmoil, I couldn’t help noticing just how good the tea was.

The author is good at exploring emotions. Some scenes make you feel like you are watching it happen in front of you.

Mahitosh Sinha Roy seemed to clench his jaw at this question. Was he perhaps beginning to lose his patience? However, when he spoke, he sounded perfectly friendly.

The book also talks about historical stuff where needed. The way the warrior Rajputs have visited Bengal and later settle down there, is one such historical fact talked about in the book. So, this book has a lot more to offer than just the story it explores.

The characters are elaborated quite effectively. They have their skills and human limitations too. For example, like many other characters, Feluda also has a habit of smoking. These details make the fictional characters realistic.

These quotes must have given you a fair idea about the quality of writing you can expect from this book.

Reading this short book was an interesting experience for me. I enjoyed reading it and I am sure you will enjoy it too.