We, at ThinkerViews, are always curious to explore various literary stuff to find some known and some not-so-known gem of Books. During one such quest we found a book series named Rankshetram (रणक्षेत्रम) by Author Utkarsh Srivastava.

It won’t be wrong for me to say that “I am mesmerized by the books in the series!“, and awaiting eagerly for next and final installment of the same. I am thankful to my team for letting me read 3 books in the series. Here, I am sharing my thoughts and views for the first book in the series – RakshRaj Markesh Ka Ant.

It might be the umpteenth time you are reading the saying, “a book should not be judged by its cover”. Indeed. But more often it is used in the wrong context. For example, you might be seeing a reference to this phrase in a TV advertisement these days. Well, I completely agree that “cover page should not be the only parameter” to judge a book, or for that matter, any media. At the same time, we cannot ignore the influence of the cover page on purchase and/or reading decisions. 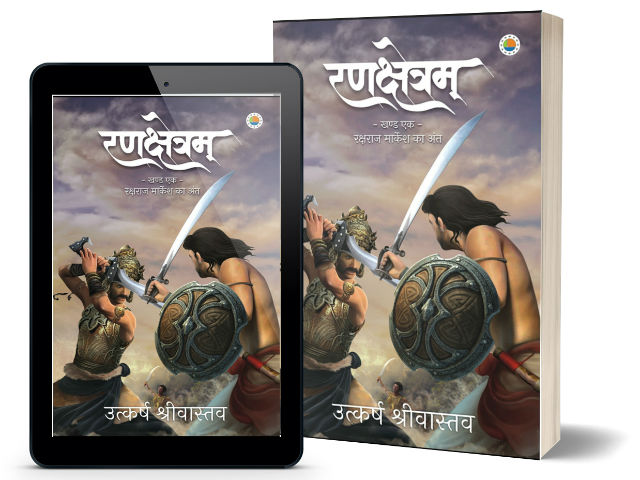 The book explores a fiction setup in mythological times. And, as its name suggests, it is about “battle(s)”. So, you can expect something like: two armies fighting each other or at least standing against each other during their face-off. The designer came with a nice idea to explore a dual (that is an important part of the book) on the cover. You can find two characters doing swordfight with each other. The sketch of the characters is of an average quality if you compare them to some technologically advanced illustration you gotta see these days. Especially, if the characters are presented as “muscular ones”, it would have attracted more readers.

The cover page could have been more attractive, but, it is interesting nonetheless. I like the detailed background.

The Plot And My Reviews For The Book:

As we cannot reveal the important aspects of the plot to avoid spoilers, let us take a bird’s eye view of the same.

It is a fictional story that explores the mythological time. It was the time when supernatural powers were approachable and supernatural abilities can be achieved. As it is said, with great power, comes great responsibilities. And, that’s why you’ve seen all the characters with super-powers (even from the modern or western world) have had challenging times. Especially at the personal end. They might have all the luxuries of the world, but they didn’t get time to enjoy them. They remain busy with the greater good and more often it drove them away from the luxurious arena. Most of their time spent doing hard and challenging jobs. The situations are not different from the characters of this book. Be it Vikramajit, Akhand or even the antagonist.

The prologue is actually the scene when the deadly battle is over and one of the (if not the) dangerous antagonists is captured and is given his punishment. This scene brings a very important and interesting fact – immortality is going to be a curse for you rather than a boon.

The quest to conquer death is seen in almost all the mythological tales. Even in the modern world – Voldemort – was looking for a solution to conquer death – through horcruxes. And, the biggest ever performed task on the earth, the churning of oceans was in the quest to find “Amrut” or “Amrit” – the nectar of immortality. But, could anyone ever won over “death”?!

The book series also brings in another interesting concept. The antagonist is not that bad. Rather than painting him black, the author has explored the events (fictional, of. course), where he was doing good, but either was misunderstood for his actions or was conned by shady planners to perform so. Love – the pious most feeling and purest emotion – can be your biggest strength and the biggest vulnerability too.

Read the following lines and try to decide that the person speaking this line can be considered as the protagonist or an antagonist?

The book teaches us to keep ourselves safe from people like Trikal Bhairav, who can turn a human into a monster.

This book talks about a specific powerful thing, held at the secure most place of a kingdom and is worshipped and guarded heavily. Some people tried to get it in their possession and a battle is expected. But whey they needed “that” thing? Were their reasons and requirements genuine and for the greater good? Will the defendants can keep it safe?

The book has many characters and all of them are explored quite in detail. The author seems to have the threads of the story clear in his mind since the very beginning. He played a masterstroke by referring “Sarvadaman” with that name rather than his other popular name. Later, he connects the dots. But, well, for that, you need to read other books in the series.

The book also talks about the damage brought to the society by the wars and battles. For some, it might be a question of ego and prestige, but it proves fatal for many families.

And, we are seeing in the modern times also, often the law enforcement people who are on the right side of the law, whose job is to capture the wrong people, often found using wrong ways to do, or sometimes even cross the line and move to the wrong side!

So, despite the story of the book is set in ancient times, you can still draw parallels. If reading is your passion and you enjoy it, you will surely draw such parallels and will find the book quite impressive.

The book has some fantastic one-liners:

The book also talks about walking on the right path, despite having all obstacles and a tough journey, doing the right thing gives you immense inner satisfaction. While reading the book will feel curious to know the journey of Akhand, Vikramajit and even Markesh. It keeps you glued to the story throughout.

Rankshetram also explores the motto of Indian (that is Bharatiya – the word – Bharat – is even more important in the context of this book series) culture about treating everyone. Females are not considered as a second gender in this culture, at least not originally. It is a parachute concept. The following lines of the book are more important to understand make it a part of everyone’s persona, especially these days when we see more atrocities towards women.

The protagonist is advocating for the free will of the woman at the event of her swayamwar (i.e. groom-selection ceremony).

The story is spread over in 11 chapters.

Utkarsh brought in an interesting story that is original and fresh. In the mythology segment, we see a lot of retelling these days. And there is nothing wrong in that. But this original and imaginative story is like a “treat”.

It is the first book of the author, but he never lets the reader feel that. The way he describes scenes, develops characters and weaves the threads of the story together is intriguing.

The book has its share of proof-reading, especially formatting errors. I read the EBook (Kindle version), and it is quite possible that the formatting issues are not there in print books. But, they are a little turn-off for E-book readers.

An interesting story, set up in mythological times. It’s originality and imaginative flow are its core strength. A delight for a reader who loves to read Hindi books in this genre.

And yes, it’s English versions are also available. But as I haven’t read them yet, I cannot comment on them.

Until the Music Stops by Naimish Srivastava | Book Review

The New Rules of Business By Rajesh Srivastava | Book Review