There are so many reasons that lead us to the world of books: education, entertainment, escape, etc. But the books also are one of the best tools to inspire introspection, especially when we read works that serve as almost analytical history of time passing, generations moving and history forming.

Sir V S Naipaul is a very famous writer, a Nobel laureate, who has won many other awards. Here at ThinkerViews we have shared our reviews on some of his books in following posts:


First published in 1979, A Bend in the River is one of his most well-known works and was short-listed for Nobel prize at the time, but did not win. with its setting, and its complex narrative, the book is well-admired by readers and critics and still remains an intriguing read. So, let us delve into this story and share our views on it with you. 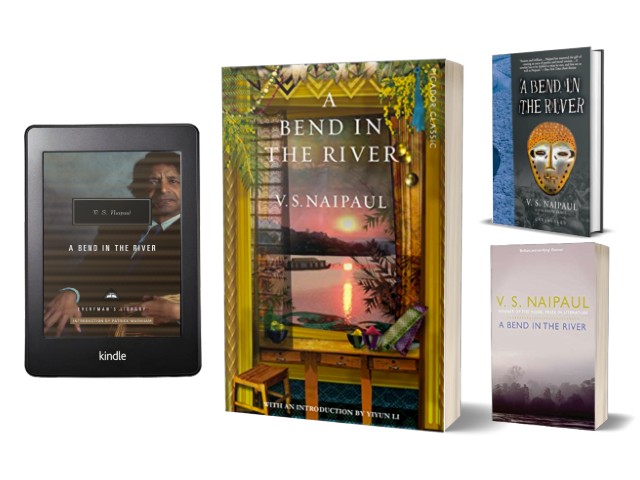 As you take a quick glance to the cover pages of various versions of this book you see notable differences. Inn one of the covers, you see the author looking towards readers from the horizontal stripes of blends. This cover doesn’t reveal much about the book, but hints about the popularity of the author. When the author’s photo is sufficient on the book cover, it confirms the esteem, the author earned.

In one of the cover versions you see a tribal mask taking the most of the cover page having dark background and the other has a natural background. The cover page we put in center gives an impression of an artistic photo in a frame that you usually found hung in art gallery.

Overall, not so impressive cover pages.

There is an ancient river in Central Africa, and humans have always gathered at a bend in this river to settle.

Salim, an Indian – African, having grown up on East coast of Africa is restless to try a new life and in an attempt to break free, moves to a little town at a bend in the river in Central Africa, to run a little shop he has bought from a family fried Nazruddin. He finds the town in its post-colonial conflict where suburbia is returning to Bush and the symbols of colonial days are slowly getting erased.

He sells little, everyday needs, makes some friends and slowly watches the town slowly building itself back into a trading post. His family on the East coast is breaking apart under the difficulties there and one of the family servants Ali comes to live with Salim. Soon, Ali renames himself as Metty – a half caste. One of Salim’s regular customers is an African woman called Zabeth. When her son Ferdinand comes to town to study and become the new man of Africa, he also becomes a part of Salim’s life.

Salim watches as the town hits another boom era – copper is unearthed and sold, salespeople flutter in and out, a Domain is built out of Bush. But all this doesn’t change the way people live – tractors are going to rust unused, the Domain remains abandoned until it is turned into a centre of education.

When Salim’s friend Indar comes to town as visiting faculty for the University, he is introduced to the world of Raymond and Yvette. Raymond was a mentor the current President in his youth and is still hoping to get back into his favour. The President’s changing political campaigns are leading to more changes and now clearly the town is on decline again.

All around Salim, people are selling off and leaving. What will happen to Salim when all his friends leave? Has he trapped himself into this version of life while trying to escape from another version of it? Is there any escape possible at all?

The book starts with following lines:

The world is what it is; men who are nothing, who allow themselves to become nothing, have no place in it.

And so you see, the world we are going to see, will not be a place of characters waiting their turn. Instead it is the world of characters desperately trying to change things, change the course of their lives, make their fortunes, but only to find that there will always be forces around them that are outside their controls and no amount of wishful thinking will make anything better.

Nowhere in the book does the writer mentions the name of the river or the town or “Big Man” – the President of the country. But, comparisons and parallels have been drawn from day one with various leaders of the post-colonial Africa who slowly made a public transition from and European educated man to a tribal chief and adapted the tribal laws as the African way.

Naipaul is known for his work focusing on colonial migration and how it affects generations.

Here, Salim’s family’s migrations goes even earlier than European colonisation and the author writes about how Arab travellers had made homes in Africa and became part of the continent. And yet, the African history is mostly documented by Europeans and hence there is only so much of it that will ever be recorded. Such a rich, vast continent that seems to attract so much brutality and pillage over centuries and yet seems to somehow at heart, remain inaccessible to outsiders.

The East coast was not truly African. It was an Arab-Indian-Persian-Portugese- place, and we who lived there were really people of the Indian Ocean. True Africa was at our back. Many miles of scrub or desert separated us from the up-country people. Once the Arabs had ruled here; then the Europeans had come; now the Europeans were about to go away. But little had changed to the manners or minds of men.

People lived as they had always done; there was no break between past and present. All that had happened in the past was washed away; there was always only the present.

The author’s treatment of African characters is honest and yet brutal at times. The book was written nearly 40 years ago and yet some of these events and lives are probably still being played out. While Salim’s character is well-formed with all his prejudices, flaws and strengths, like a lot of other works by V.S.Naipaul, there are hardly any women characters that will stand the scrutiny of a modern reader, partly because in spite of their multi-faceted personalities, they are part of a patriarchal setting and we see them through a prism of the narrator’s view of the world.

The strength of the book is its richly detailed narrative and the observations on how humans have shaped the modern word in their quest to conquer one land after another, one of the most recent attempts being European colonisation. Repeatedly, through the book we see the gaps between the Western world thinking of civilisation as they know it and applying it to the tribal lives and mingling of people as they came together at places like the town in this story.

How trying to build museums to display household heritage of various peoples cannot lead to building of histories in entirety when it comes to something as complex as Africa. The author has used the phrase below, which does well to describe dealings of people with one another, when the goal is only survival:

It is not that there is no right and wrong here. There’s no right.
We none of us had certainties of any kind. Without always knowing what we were doing, we were continuously adjusting to the arbitrariness by which we were surrounded. In the end, we all had to survive.

Through Salim’s eyes – who is considered an outsider himself – we see the town’s build-ups and declines with the tides in the river. How in spite of all the efforts towards building a different way of life, and enjoyment of advancements in facilities and novelties for a little while, there is always a cycle of destruction.

The author slightly alters the mottos of the town and shows us what he calls the masque of Africa as well as African rage.

This piece of earth- how many changes had come to it! Forest at a bend in the river, a meeting place, an Arab settlement, a European outpost, a European suburb, a ruin like the ruin of a dead civilization, the glittering Domain of new Africa…

A realistic and thought-provoking tale of an African town and the people it brings together, only to see them go out again as time passes by…

Previous: The Night of Wenceslas by Lionel Davidson | Book Review
Next: BUDDHA: Spirituality for Leadership and Success By Pranay | Book Review