The Krishna Key is the latest book by Ashwin Sanghi. This book is also a thriller and it seems that Mr. Sanghi now understood well that what people love to read Or at least from his books.

Mr. Sanghi now swims more comfortably in his story-telling approach which runs two stories parallel; one (usually mythology) from ancient times and one set in modern world. It is not wrong to say, that he is fluent in the genre. 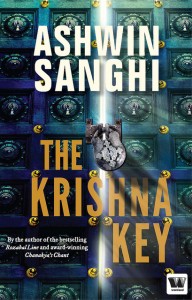 So What is – The Krishna Key – about? Well, let us try to look at the book content, however we are trying to keep spoilers at the bay.

But before that let us take a look at some background stuff, to get in rhythm of what this book is going to offer. The Indian mythology tells about the three great Gods, who are responsible for almost everything. Lord Brahma – the creator, Lord Vishnu – the manager, and Lord Shiva – the destroyer. So Lord Vishnu had to constantly and effectively maintain all the segments of the society. Also even when the stuff seems to be dis-balanced he himself had to come to action to balance it by doing the needful (unless the final destruction is Unavoidable by all the means). In order to do so Lord Vishnu periodically takes birth in the form needed and does his Karma.

As per Hindu mythology, during a cycle from The Beginning to The End; Lord Vishnu takes ten births – known as Dashavatar. They are Matsya, Kurma, Varaha, Narsimha, Vamana, Parshurama, Rama, Krishna, Buddha and Kalki avatar. In the current cycle all of the first 9 avatars appeared and did their respective jobs. Now it is considered that once the stuff is out of control and very dis-balanced, the last Kalki avatar will appear to destroy the evil and re-establish the good.

This book follows the tale of one of the most versatile avatar of Lord Vishnu, Lord Krishna (from the old times) and the (possible) Kalki avatar (from the current time).

As per the various reference of The Mahabharata and The HariVamsham, there are four gotras (segment of lineage or tribes) of Yadava lineage (to whom Lord Krishna belong to) carried on after Lord Krishna’s death. They are Saini, Satvat, Varshney and Chhedi. The antagonist believe that there are some highly valuable remaining of Krishna was in possession of these tribes and was carried forward generation to generation. It should be currently available with the most worthy descendent from each tribe. His job is to found those people, then find the mysterious stuff from them and kill them. Final when he have all the pieces of the worthy stuff in his own possession, he will have “The Krishna Key” and he will be most powerful man on the earth. And, according to the antagonist, he must have to complete the task as, according to his belief he is the last avatar of Vishnu, Kalki himself!!

All these couldn’t be co-incidences or are they? Is he actually the avatar of Kalki? Is it possible that he is not the antagonist as we wrongly assumed, but he is the protagonist?! And the objects he is looking for are indeed the legacy left for him (Kalki Avatar) by him (Krishna Avatar)?

Well, read the entire book to get glimpses of ancient Indian tale maneuvered in the modern era and you will enjoy it. Definitely the book is a thriller and thriller lovers find a lot of similarities between Da Vinci Code – by Dan Brown and this book (or rather say influenced by the way of the the story telling of it). The book indeed is not representing the Indian mythology, so don’t expect it to be perfect in that manner. Neither it is the best book to go for. It has its ups and downs. But it certainly is worth reading.

The Video Trailer of the book is embedded.