Veena Nagpal is an Indian author who loves reading, writing and photography. Regular readers of ThinkerViews already met her in this interview.

Earlier we have reviewed her book The Uncommon Memories of Zeenat Qureishi. She is back with another venture named Radius 200.

The tagline says it’s “The story of a fragile love trapped in the crossfire between two nuclear powered nations warring over scarce water resources“. 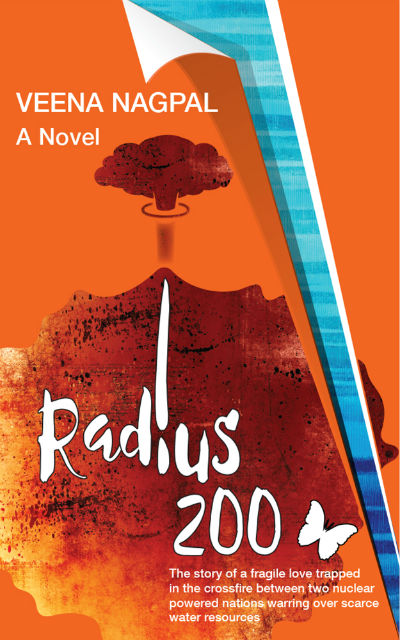 That should give you a fair idea of the premise. The battling nuclear powers are India and China who are fighting over the precious water of mighty river Brahmputra.

China’s historical appropriation of Indian territories is hardly a secret, whether it’s Aksai Chin that was partly gifted to Pakistan, or the continual denial to recognise Arunachal Pradesh as part of India. In recent years, China has been known to execute extensive infrastructural project close to the Arunachal Pradesh borders and a proposal to divert the flow of Brahmputra to generate hydro power to fulfill requirements of the enormous population of China.

On the other hand, when you think of future world, it is a widely acknowledged fact that a very large part of the population will probably die for the simple reason that there won’t be adequate water to quench their thirst. As you probably know, only very tiny percentage (0.5-0.8%) of water on earth is actually potable and good for human life. Rest is locked in the seas, the icy glaciers or is too contaminated and polluted. And the worst bit is the part that this precious amount of water has always been subject to conflicts. As the book describes:

46% of the globe’s surface is covered by trans-boundary river basins – a total of 276 such basins. 92.7 % of these are shared by two, three or four countries. 20 of the 276, are shared by five or more countries and one – the basin of the river Danube is shared by as many as 18 countries. “At a time when the world is struggling to manage an unprecedented water scarcity, trans-border river line disputes assume life and death significance.

So it is quite possible that water will be one of the most fought over commodity in not so distant future. And when the lives of hundreds of millions of people are at stake, use of nuclear weapons to secure water supply for your nation is not that far from justifiable for politicians. And that’s where Radius 200 starts.

When Indian army learns about China’s plans to build a massive hydro power project on river Brahmputra such that it will divert the river and take it away from India, it inspires a die-hard crew of Indian and Tibetan soldiers to go on Mission Jaldhara. While Brahmputra is important to Indians, it is the holy Goddess Pemakoe of the Tibetans. As the author explains:

The river Tsangpo starts its life near Mount Kailash, meanders through the Himalayas and eventually re-appears out of the foothills in northern Assam, as the Brahmaputra. Up until the early 1900s, no one had thought of the two as being the same river. The reason was that the Tsangpo disappears from the Tibetan plains, into the mountainous dense jungle of the Tsangpo Gorge at about 10,000 ft above sea level, whereas the Brahmaputra emerges out of the Assam foothills, on to the plains of India at about 500 ft above sea level. The distance between these two places is only around 200 miles – which translates into a drop of over 3,000 meters over a distance of 200 miles. Explorers of the time thought that was incredible, but were later forced to accept the possibility, when some illiterate locals talked of a giant waterfall. In 1911 the waterfall was discovered at Pemakoe in Motuo.

The mission Jaldhara team of highly trained commando crew uses thermobaric weapons to destroy the “under construction” dam with a hope to put end to China’s invasion of the Himalayan river basin.

But, China retaliates with a nuclear missile that wipes out half the north India. The heartland where Gangaand Yamuna cradled the ancient and advanced civilization of Bharat, is now nothing but a barren landscape. There is no hope of recovery or rehabilitation as the nuclear weapon leaves harmful radiations behind that will make healthy human life impossible for decades to come.

The Government has no option but to seal off the area as a “No-Entry” zone for anyone and everyone to control and prevent spread of contamination. Are there any survivors trapped in there? No one knows. And even if there were, life after a nuclear attack usually makes you pray for death, as it leaves survivors mutilated and devastated.

If there are people left here, they have no food, no water, no shelter. And when humans are faced with survival, civic niceties and honor are nowhere to be seen. There is no animal on face of this earth, which is crueler, more cunning, more deadly, then humans when their only other option is death. Bound by their physical disabilities, their mental powers warped by the radiation and continuous struggle to find food and shelter, the survivors in the ‘no entry zone’ of radius 200 are ready to sacrifice one of their own children in false hopes. As the only maternal figure here keeps humming to herself, their life is bound in this daayra:

Born free!
Oh yes, we are born free
Free within tethered circle encircled
Bounden, restricted, limited each within our
Daayara…

Born free!
Oh yes we are born free
Free to wander, build, tear asunder
Make our choice, raise our voice
Limited each within our
Daayara…

Like tethered animals we move,
Each within his own
limited circle
Daayara…

Outside the nuclear attack zone, India’s water situation is getting pretty desperate and there is increasing support now for the quest for the ancient, lost river of Saraswati. There is a dedicated group of researchers who have a notion of where it could be found and the place happens to be Allahabad, the holy place of sangam, where the Hindu legend says, Ganga and Yamuna meets Saraswati.

The only problem is – Allahabad happens to be smack in the middle of the “No-Entry” zone.

But, every stage needs human characters to inhabit it and play out the drama. Hence, add to the above scenario a love cum “fatal attraction” quadrangle of Kyra (journalist), Om (soldier), Arjun (Researcher) and Gayatri (diva singer), and you have got the cocktail for a thriller. In their “stranger than fiction” life, they all are entangled in each other’s lives whether they are together or separate. Om and Kyra loved each other, but never quite managed to tell each other how much, Arjun loved Kyra but she didn’t love him, and Gayatri loved Om, so hated Kyra with all her might because Om loved Kyra.

And in the post-nuclear attack world Gayatri is still with Om inside the exclusion zone, Arjun is married and settled, while Kyra is struggling to make peace with the fact that she may never see Om again. Their situation can best be described by the song that Gayatri keeps singing: Daayra…..

Will Kyra and Arjun reach them in time and stop this barbaric act?

One thing I liked about Veena’s writing is she takes important issues which are worth talking about, but often remain “not talked enough” or “not talked at all”. Like her previous book, when writing she writes with her conviction and then don’t hesitate to refer the things in actual aspects. Of course, the “water issue” is not new. The civilizations are blossomed on the banks of river. And thus, the Indian mythology refers the river as “the mother”. And thus various localities, tribes, states and even countries started monopolizing control over it. And thus the problem(s) started raising. Even Ian Fleming have mentioned about the “war for water” in the James Bond adventures he wrote.

Like Indo-Pak water treaty, the water of Brahmputra (or Brahmaputra) is in talks these days (and was there in talks/dispute earlier as well).

The story is propelled with the help of supporting characters including intelligence spies, politicians, benevolent tribal and so on, as all of them are moving toward the single instant – that of the child sacrifice within the exclusion zone.

Veena have added characters thoughtfully and she is succeeded in exploring them at good extent. The pace of the book is also good.

The story makes a nice read, but where it truly comes alive is during the trekking of Indian soldiers through Himalayan valleys on their mission. That is the part of the book where I truly lost myself in the reading.

This book will make a nice read for travel.

For Indian Customers: http://amzn.to/2oGr5Mw
For US Customers: Buy RADIUS 200 from Amazon.com

Land Of The Seven Rivers By Sanjeev Sanyal – Book Reviews

An Interview Of Author Veena Nagpal