Can you imagine that an illiterate person living in humble background joined the Naxalite movement ended into getting arrested and jailed, got a chance to learn reading and writing in the jail and was encouraged by none other than famous author Mahashweta Devi to write books?

This unbelievable true story belongs to Manoranjan Byapari. He had seen various segments of the society that are not known to the people. He witnessed some realities which are beyond thinking, at least for those who are sitting in the comfort of their own home/office and sharing their own thoughts and think that they have done their due in terms of social responsibilities.

While the book was in our kitty since a while (as we’ve bought it during a book promotion. Frankly, we didn’t knew much about the author or the book at that time. Of course, the author’s work is originally created and published in his native language, the book we are referring here is the English translation of the same by Arunava Sinha. To be precise, the book was first published in Bengali as Batashe Baruder Gondho in 2013 and the English translation “There’s Gunpowder in the Air” Published in English in 2018 by Eka, an imprint of Westland Publications. Recently, when the book was shortlisted for a top book prize, we’ve researched more about it, and decided to give it a priority.

From Team Thinkerviews, I got a chance to read it, and here is my unbiased review for the same.

Let us take a look at the cover page of There’s Gunpowder in the Air.

Of course, a book cannot be judged just only by its cover page. But, one cannot deny the influence of the book cover in a remarkable number of book purchase and/or reading decisions. 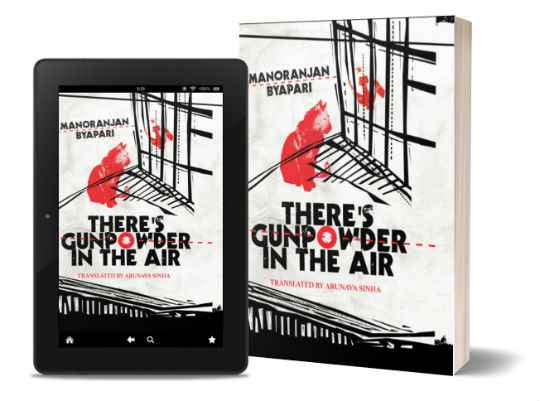 The cover page of the book uses the minimalistic theme with the maximum use of black and white color. Red color is used to make an impact. It is not easy to justify the title “There’s Gunpowder in Air” on the book cover. The book tires to show a reflection of the jail environment. You can also see a cat. While it gives an eerie effect to the cover page, it doesn’t go in sync with the title. But, there is a chapter in the book (and its impact is seen in many parts of the story) where the cat plays an important role. In those senses, we can say that the cover page remains faithful to the story.

Overall a simple cover page which can attract a reader.

It all starts with Bisheshwar Mukherjee‘s appointment as the jailer of one of the sensitive jails of India. Mr. Mukherjee is in the last stage of his career and is quite watchful. He doesn’t want to be associated with anything that can affect his impression or career record. Actually, most of the government officers play safe in the last few years of their service. It is considered unwise to invite any unwanted trouble at this stage. It can lead to some consequences that almost everyone at this stage of their lives, no one wanted to entangle with.

While the jailer is the superior authority of jail, there are some things he needs to be aware of. And, the jailers are keep getting transferred to one jail from the other (or from another post in the department), but some staff members stay there for longer. The jailer needs to keep a good repo with them all, along with the prisoners too.

The jail where Mr. Mukherjee got his posting is quite sensitive as some people associated with Naxalism are kept there. They are intelligent, sharp, educated and determined. While they are found very cooperative so far, it is assumed that sooner or later an attempt to free them from the jail would happen.

What will the jailer do here? Will any such attempt actually take place or it was just an assumption? How are the things functioning in jail? You need to explore

As said earlier, Manoranjan Byapari had links to Naxalite moments. He started reading and writing in jail. He had seen the environment of jail from his own eyes and experienced the things there. Earlier he wrote under pseudonyms such as Madan Dutta, Arun Mitra, and Jeejibisha.

He was born in a Dalit family and he has experienced various stuff that is unthinkable for us. The circumstances, social and political scenarios he had experienced with are quite different. I am reiterating it because many of the modern day readers may not think that various elements of the entire story are quite realistic. Actually, Byapari wrote most of the things from his own experiences.

In the beginning of the book he clears that, after the break-up of the Soviet Union he was convinced that there are only two classes of people: 1) Oppressor and 2) Oppressed. He went ahead and said:

Everyone is tyrannical as they can be, and those who have no power suffer this in silence. But when the same people acquire power in some manner, they too exploit those who are less powerful than them.
…
The objective of human beings is to be authoritarian in one form or another.

The way he has analysed human behavior and put it into words is remarkable. It proves that there is no age of learning something new. No matter started getting educated very late in his life, due to his circumstances, but his thoughts seems to be clear from a very early age, and he is able to express them effectively.

He has explained the situations in the jail from his first-hand account. The way he explores the jail through his words is something you shouldn’t miss. From how a jailer is treated in the jail, how the main and small gates are used, how small utensils are also a sacred resource in jail, how corruption takes place even in those utensils, how the security arrangements are made, how some prisoners are given privileges to be an informer to the system, how some prisoners consider it to be utmost guilt to be a traitor to fellow prisoners,… and many more such things are explored in matter-of-factly manner in the book. Of course, we cannot vouch or authenticate the details, but whatever is available in the media authenticates the stuff.

The deteriorating conditions of jails are mentioned by the author in plain simple words.

No jail in the country is a secure fort now.

When he talks about the psyche of some of the prisoners, it is applicable to almost everyone.

No law or regimentation or repression can obstruct those who are not afraid of death.

The author is very effective in expressing his thoughts:

We realise that when a person speaks, when presents an argument or an analysis, it isn’t just the person alone who is speaking, but also his earlier history, class, family, blood-group, economic and social status, education and experience.

Very true. A person’s behavior is a result of his persona, experience, his/her circumstances and many other such stuff.

There are some fantastic and realistic one-liners in the book:

Anxiety is the arch-enemy of slumber.

There was no greater enemy than an empty stomach.

When he talks about corruption and the way the prisoners find a way to communicate to the outside world, and how it is facilitated, he also mentions that the things are done based on trust and honesty! He says that the person involved in the communication channel knows that he can keep his share but he cannot keep everything:

They know you can betray the customer only once, but honesty brings repeat business.

The tragic circumstances of some people who lives in utmost poverty and very tough situation are explored in the book in a very effective manner. Any sensitive reader will get emotional while reading it. Some people find that staying in jail quite better for them as they actually get food regularly! Just think how tragic situations they might be living in.

How will I stay the same, babu! Do you think I get to eat and sleep out there as regularly as in jail? One shoulder, a thousand responsibilities. My health is broken.

In the same aspects, here are some lines where you can see sarcasm and sad humor entangled together.

But then, sir, it is not as simple as that. So much trouble getting in here. No chance of getting caught till I’ve sneaked into at least twenty five homes to steal. You know what they say, people go to work every day, burglars only once in ten days. So just imagine, first there’s no work for ten days at a stretch. … Even if I get caught, some of them just beat me up instead of handling me over to the police. How do I get to jail then?
his tragic life is explained then the entire conversation is depressingly showing the mirror of the society and circumstances he lived in.

In the same aspects:

Hunger could rob a person of all love and affection and sympathy and make them inhuman. Could a mother abandon her baby otherwise?

Some lines spread wisdom along with:

All human beings make mistakes. Only the devil does not. A true human being learns from his mistake and chooses the correct path.

The way the concept of “amdani” is explored in the book is interesting. The book also explores the difference is upper and lower class of people, the imbalanced environment of the social tapestry and its role in various crimes.

… So many people don’t get even a mouthful to eat, while so many others, who have never shed a drop of sweat in their lives, own millions. They spend thousands of rupees every day without a second thought. …

I wanted to avoid as many spoilers as possible and I hope I am able to do so while exploring various attributes of the book. The quotes above will give you a fair amount of idea about the quality of the writing in the book and what you can expect from it.

Overall, a hard-hitting, realistic take on various stuff in the society by exploring jail life. It is not a time-pass or light read. Just go for it if you like reading such books.