Ashwin Sanghi is one of the most appreciated authors when it comes to modern Indian literature. When it comes to thrillers set-up in the modern world having roots in Indian mythology, his works are worth reading for sure. Though I was not impressed with his earlier books much, I found he grew up very much, as an author, with each of his books. And, some of his recent books are really a treat for fantasy fiction lovers.

We were very much curious to explore his latest full-length book The Vault Of Vishnu since its release, but unable to find it available at a very attractive price. Eventually, we opted out for trial of “Kindle Unlimited” program, and this book is part of “Kindle Unlimited” catalog, so it turned out to be an opportunity for us to read it for

It is a well-known fact that the cover page of a book (or for that matter, any media) can surely influence many of the purchases and/or reading decisions. Of course, the book cover is not the sole element you should consider while choosing your next read, but it creates the first impression of the book and thus can’t be ignored. 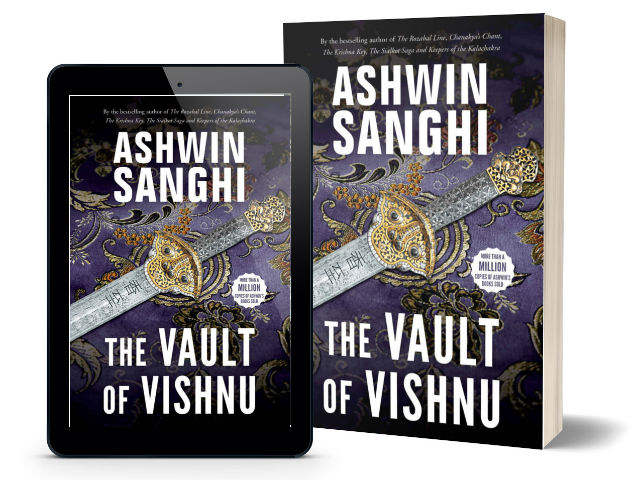 The Vault of Vishnu By Ashwin Sanghi | Book Cover

As you can see, the cover page of – The Vault Of Vishnu – has a dark background. Book Title, Author’s name and other text elements are in the contrast of the same. The hand of the sword having text in Chinese (Mandarin) and other silver and golden color designs make the cover page look rich and impressive.

Like the earlier books of the author, there are two parallel stories move ahead, in different timelines. One is dedicated to a famous Chinese traveler’s fictional travelogue (and thus obviously set up in ancient times) and the other is in contemporary time.

It all starts with the Chinese invasion at Doklam!

Yes, the book was written and released before the actual invasion by Chinese army troops in Doklam which lead to Indo-China clash at the point. The situation is not completely normal yet, though.

The most intriguing part of the invasion is “invaders”. They seem far from typical Chinese troops. It seems not only their built but their physical strength is also of a superhuman level. And, they were more like butchers then the soldiers.

Seeing the footage of this invasion and brutality an emergency meeting of top authorities is called up in India. Eventually, Wing Commander Paramjit “Pam” Khurana, daughter of a Late army officer is roped in to investigate the realities and more importantly the technologies that are used by the invaders. The reason was/is simple. You can fight the enemy only after knowing his/her abilities and warfare utensils.

The thread eventually takes Pam to her friend Mark and eventually, she is able to find Dr. Raja Rao, the man whose knowledge in this specific area of interest cannot be challenged.

The Chinese government is also having its power-centers and they are doing their bit to explore the technology used in this butchery to even superior level. Their combing operations run in Angkor and nearby areas in Cambodia. And yes, they have their eyes on key persons involved in this investigation in India.

So, what will Pam found? Who are with the nation and who are fighting against it? Why foreign intelligence agencies are also keeping a close eye on these developments? Who all are involved? Will it lead to a highly-technical war between two of the largest populated countries in the world? Well, you can explore this fictional tale spread over in Doklam, Bhutan, India, China, Cambodia, Angkor Wat, Angkor, Kashmir and other parts of the world, where you will meet Wing Commander Paramjit “Pam” Khurana, General Jai Thakur, Mark, Jaya Roy, VTK, Erkin, Dr. Raja Rao and many others.

The book explores the things in the mythological and historical arena and at the same time, it has the main thread in contemporary times. These threads are weaved pretty effectively with the technology of tomorrow including AI (Artificial Intelligence) weaved with human engineering. These parts are nothing less than any “science fiction”. For example, ADAM and EVE Chinese programs. Not only the names are interesting, the details explored are equally amazing.

The author has done remarkable research on AI, Robotics, Warfare technologies, Human engineering and many other areas. The way he linked the things with mythological elements is simply brilliant. I like the way he talked about the Angkor Wat, the largest temple structure in the world dedicated to Indian deities. The historical times of Chola kings made alive on those few pages.

Through the fictional travelogue of the world-famous Chinese traveler, the author has explored deep-rooted links between Buddhism, Indo-China relations, Silk route and a detailed account of the kingdoms of those times very effectively. You can explore not only political but also the cultural influences of those times in that travelogue. It also shows how ancient the Indian civilization and its Chinese counterpart are.

Frankly speaking, this entire thread doesn’t add much to the main story. Of course, it has an important link, but that could have been explored in a single chapter in my opinion. This entire thread could have been edited out. However, if you are a history aficionado or want to know more about many aspects of Indian-Chinese culture which are missed from the popular general narratives, you will love reading this thread. The footnotes exploring the details about the places and persons talked about shows the efforts put in by the author in his research work. He must be appreciated for that.

I also like the way the author talked about the modern political scenario in China in this fictional tale. Rather than just showing them as an enemy, the author’s balanced approach reveals some lesser known side of the situation.

The way the Indian way of living, martial arts, yoga and other practices are explored will make you proud of the nation and remind you of the roots of the Indian culture.

The good thing about the characters of this book are, though they are imaginary and sharp, intelligent and little-bit heroic, they are realistic. They make human-errors. They got overpowered by emotions. They feel vulnerable. But, they don’t give up. They are fragile yet strong. And, that makes the readers connect with them quite effectively.

There are many aspects of the story and its elements worth quoting, however, it will lead to spoilers and I want to avoid them as far as possible. Let me try to quote some elements, though, all the care is taken, please read with the consent that some spoilers may not be avoidable. We, at ThinkerViews, quote some segments of the work for various reasons. One, of course, is we like them and other is, they will show you the glimpses of the actual work, so you can judge the narration, quality, linguistics and other attributes by yourself.

The way, the author has explored emotions and thrills in the book is something you will love reding. For example:

Her clenched fists inside the coat pockets gave away her nervousness.

The weather that day had been unforgiving. Icy winds howled in chorus with bursts of thunder and rain.

The book has some interesting lines which are no less than quotes you want to remember.

A hero is no braver than an ordinary man, but he is brave five minutes longer …

Use your ammunition wisely and keep your powder dry…

The attitude and dedication required by the people associated with the agencies who are taking care of national security from outside and inside threats, is of the next level. They have to find their humor in sarcasm. And, when you watch a thriller or spy-fiction (like James Bond Movies or Schwarzenegger thrillers, for example), you love these elements right? Well, in this book also you will find some such lines.

Attendance is compulsory. No excuses for your absence unless you’re dead. and even then, try to make it.

… the DRDO too was controlled by an army of civil servants. Pam often joked that DRDO bureaucrats were like defective guns: they never worked and could not be fired.

… it was easy to develop artificial intelligence but much more difficult to counter natural human stupidity.

As said earlier, the list is long, but I need to stop here.

A nicely written, gripping thriller which weaves mythology, thriller, Sci-fi arenas in an interesting manner. Its contemporariness is its plus point. The Chinese-traveler’s fictional track is well-researched and documented but doesn’t add much value to the main story.