An Atlas of Impossible Longing by Anuradha Roy | Book Review

Anuradha Roy has been making waves in the world of Indian authors writing in English since her debut in 2008 and has many awards and prize nominations to her credit. It was by chance though, that we came across her work while browsing in a library looking for something entirely different.

It is through such chance encounters that readers are connected to some of the best loved authors. I read her debut book “An Atlas of Impossible Longing” and am delighted to have this opportunity to share my thoughts on it here on behalf of Team Thinkerviews.

A poignant image of delicate flowers floating in a dark body of water with a female arm wistfully touching one graces the front cover page. A strong statement telling the readers that you are about to embark on a wistful, poetic and painful journey of characters traversing a very difficult path. 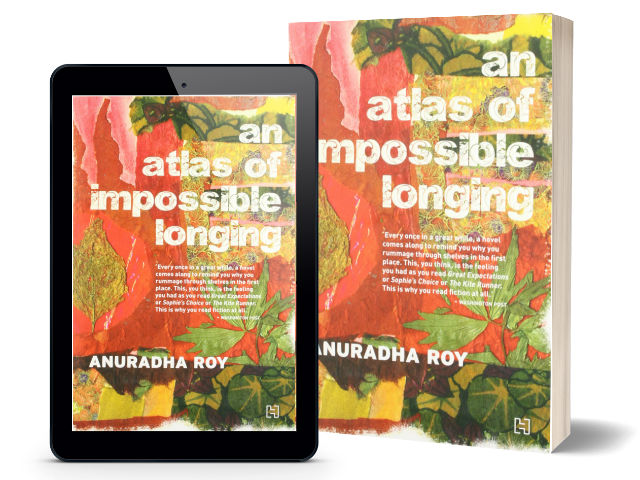 An Atlas of Impossible Longing by Anuradha Roy | Book Cover

The design is slightly more targeted to western readers, but will also appeal to all literature lovers. This, however, is not a design for readers looking for entertainment read.

We meet Amulya as he extricates himself from a party where tribal women are dancing the night away. It is early nineteenth century in the sleepy town of Songarh, where he has built himself a house, a business and a life far away from the bustle of Kolkata. While Amulya is fairly content, his wife Kanakbala struggles with the imposed solitude and eventually becomes disturbed enough to spout profanities as she grows older. Kanakbala makes unlikely alliance with an anglo-Indian lady living across the street after witnessing the murder of Larissa’s husband.

Amulya has two sons – Kamal and Nirmal. Kamal is married, but remains childless. Nirmal is married to Shanti and after a brief period of marital bliss, she passes away in childbirth. Nirmal takes off on far-away archeological expeditions.

A few years later, the household now has Kanakbala, old and considered mad, Kamal and his wife Manjula, Nirmal’s daughter Bakul and an orphan Mukunda that Nirmal took in after Amulya’s death. Nirmal has found a mother-substitute for Bakul in Meera, who is a widow and a distant relative. The household dynamic changes when Nirmal comes back home as his application to start an exploration dig in Songarh is approved. He finds it difficult to connect with Bakul. He ends up befriending and then alienating Meera as there is no way for their attraction to come to fruition. And he ends up sending Mukunda to a boarding school in Kolkata.

A few more years pass. Now Mukunda is a young man. He has severed all ties with Nirmal and the family. He now works for a builder, is married and has a son. But fate brings him back to Songarh and back to Bakul. There is no denying what has always been between them and the Mukunda who returns to Kolkata can’t help it as he slowly destroys the life he has created.
Life brings them together one more time, at another place of ruin and sad memories….Can they bind it together to start again?

As you can see, this is a story of three generations, told in three parts, in three different narratives and through each time spills like a cotton yarn never to be pulled back. The setting is historic – Bengal of the early twentieth century and upto after the partition.

And then there are the houses. The prologue gives you a fair idea of their importance as it takes us to that house on the river which will keep affecting the lives and deaths of these characters. Amulya Babu’s house is another one that he has built against all conventions and odds. The house matures with his family and then crumbles with it.

So do the night flowering, white, scented garden of Amulya’s making that grows on with the family and then turns into a chaotic bloom of puzzles. Then there is the house that Mukunda lives in while he builds a family in Kolkata and then has to live to face the indignities of shared accommodations elsewhere in that gigantic city.

The house not only move along the story, they are also metaphors for the cycle of life for the characters and also tell us a lot about the people who built them and live in them. They are supposed to be the safe havens, but they also are prisons and they also are the bounty which attracts predators who can’t wait to possess them by any means possible. Possession of land and houses can become the ultimate symbol of grid and there are more houses built on tears of lost hopes and dream then there are on honest hard work.

What are these grand houses but arrogance? The river will make this house its own. My grandfather boasted of Italian marble. That marble will be the river’s bed now. Fish wil swim in and out of our finest teak shelves and nibble our ivory figurines. Frogs will lay eggs in our English porcelain, water snakes will twine our pillars. The windows will fall off and flow down to the sea. My grandfather’s bust will stare into weeds, the ink from our papers will colour the water black, moss will ooze out of burst bedding, beds and chairs will float out like boats, the rooms will lie empty for fish to breed in them.

The author built her characters stroke by stroke, so it is a while before you see them clearly. They are typical of their times and they stumble through life just as most of us do. They make mistakes, fall in love but lose it sometimes through their own follies and sometimes through taking the wrong turn. They struggle with forbidden desires, depression, moral dilemmas and day-to-day demands of making a living. Amulya builds a life away from his past while Mukunda has no past to build upon. And he thinks that being an orphan would mean being free to live as he liked:

People have stories about their physical features. They debate if they have their father’s nose or mother’s chin. Are they tall because their grandfather was? And will their children inherit their family propensity to insanity or baldness? Of all this, I am free. I spent my childhood scanning strangers around me, wondering if the map of their faces would show me a way to my lost parent. But I began to feel a sense of freedom as I grew up. I was free of case or religion. I felt released from the burden of origins, from the burden of belonging anywhere, to anyone.

But if you don’t belong anywhere, you also need to build your life ‘brick-by-brick’ and when you are born with nothing but longings:

Want, want, hope, hope. This is what your palm is – an atlas of impossible longings.

And in spite of all and everything Mukund and Bakul can’t stop from completing the journey they started long ago, although they both know this will lead to more misery and despair. It is so often that we turn into bystanders in our lives to avoid exactly such outcomes and still seek and escape in other people’s eventful lives:

At times, he yearned for the populous cacophony of other people’s lives despite the knowledge that it would certainly make him unhappy.

It is a sad, beautiful journey where a lot turns to dust on the way and yet somehow there is hope at the end and a new beginning. There are also so many places in the narrative where you yearn for events to turn out differently, and yet know that the way of the life is not always sensible or as can be predicted into neat patterns. People get caught up in the make-believe world where they amass possessions only to leave them behinds sooner or later. But life goes on and the next generation has to go through the same possessions and find their own treasures.
Although the book is set in Bengal of the early twentieth century, there are not many references to the political movements or freedom struggle. The author touches briefly on the effects of 1947 partitions but keeps the internal struggles of her characters in the forefront.