Being a working adult is hard work. You are forever trying to stay in step with the financial world – buy a house, invest in stocks and mutual funds, plan for children’s education, plan for retirement..The list goes on.

All of this requires a certain level of trust in the economical structure of our society. That the investments will produce returns, that your money won’t disappear by the time you retire, that you will not lose the house you have been paying for for your whole working life.

But the economy is a dangerous place. There are so many scammers and schemers in the financial world that a lot of trusting people get defrauded of their life savings quite routinely. There are countless tales as history keeps repeating itself, whether it was the bull market or dotcom bubble of the nineties or the economic collapse of 2008, whether it is a small co-operative bank going out of business or a mutual fund folding inwards, the ruin it brings to normal lives is irreparable.

Recently, I came across a book that is partly based on the real-life events of the 2008 economic disaster. Author Emily st. John Mandel has written books loved by readers before this and doesn’t disappoint with her latest The Glass Hotel. So, let’s discuss my thoughts on this book on behalf of Thinkerviews. 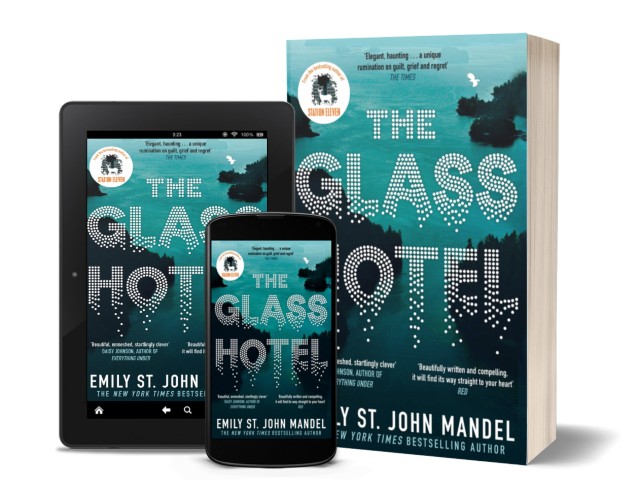 The book cover shows the glass wall overlooking at the midnight blue ocean dotted with dark woods. The title is made up of white dots that are disintegrating like the graffiti made by an acid marker pen on glass.

While I would not have picked up the book solely based on the cover page, it will make sense once you are in the story. A moderate cover page.

We listen to Paul as he tells his story to a counselor. He is obviously trying to remember the past memories that are partially lost to him. As he tells us about his wandering, aimless life studying finance at the university and a chance outing leading to death of a musical band member through drug overdose, we start to get a sense of the disjointedness of this world.

Through Paul, we meet Vincent. His half-sister, a troubled teenager grieving over her lost mother to a young woman in the city putting her life together as a waitress. Skip a few years and both Paul and Vincent are back in their remote hometown in Canada, Caiette, which can only be reached by a boat. There is an isolated glass hotel here, that allows rich patrons to experience wilderness without having to give up any comforts of modern world. The hotel is owned by a rich man called Jonathan Alkaitis.

Tonight, Vincent is tending the bar and the staff is anticipating Alkaitis to arrive at any moment. But a graffiti shows up on the glass wall of the lobby before that. Changing the course of life for both Paul and Vincent. Paul is let go under suspicion of having written the graffiti and Vincent takes up Alkaitis, becoming his pretend trophy wife.

A few years later again, it is night of a Christmas party when the world folds around Alkaitis. He is arrested for a financial fraud and Vincent is back trying to find another path through life. She becomes a chef and goes working on ships. Paul drifts through life until he finds his niche as an artist composing sound tracks for videos shot by Vincent as a young girl.

What happens to these lives then? Will Vincent and Paul ever meet again? What about Alkaitis and the victims of his scheme? What was the graffiti about?

As you can see, the story has quite a few central characters whose lives become center stage at one point or another. The author tells the stories in periods, so she tells us about 1999 in one segment, jumps to 2008 in another, 2018 in yet another and then keeps moving back and forth between these timelines. Thus, building blocks of the story such that the mystery elements only come together around the end.

Paul and Vincent are both drifting through lives like almost everyone of their generation – struggling with life-altering decision to be made at young age with no real guidance or helping hand. Paul struggles with substance abuse while Vincent struggles with grief. In spite of the odds against them, they do find some semblance of happiness and success in their lives, albeit fleeting in nature. But, then there are characters like Leon – who has had a steady climb over corporate ladder until he falls through the snakes to end up in the drifting, shadow life of no home or future in his sixties.

And then there is Jonathan who has lived in anticipation of being caught his whole life – living every day as if it is the last. He lives in the country of money, which remains the same no matter where you are in the world and is also drifting without an anchor. So is the staff who worked in the fraudulent part of his business who know that something is not right but also not know it at the same time, shutting part of the knowledge away from their selves.

In spite of the well-crafted structure and characters with a similar identity crisis linking them, the book is also filled with lot of loose ends e.g., death of Charlie Wu. Without the stories of Paul and Vincent, the book would have been a white-collar crime story. With them, it also becomes a story of human survival and endurance.

The book is beautifully written and has many a memorable lines about human nature. Every single one of the characters feels deceived by the world and the people around them at some point in time, either through lack of knowledge, greed, delusion, denial or ill luck. Just to share the one with you:

Give me Quiet, Give me forests and ocean and no roads. Give me the walk to the village through the woods in summer, give me the sound of wind in cedar branches, give me mist rising over the water, give me the view of green branches from my bathtub in the mornings. Give me a place with no people in it, because I will never fully trust another person again..

A thought-provoking story reminding us how perilous modern world is and how only few are lucky to survive it unscathed….