Continuing our quest to explore The Four Elementals Trilogy by Yajat Sharma, today we are going to talk about The Skull Warrior, the second book in the series.

You can read more about the book series and the first book in the series in the article mentioned below: 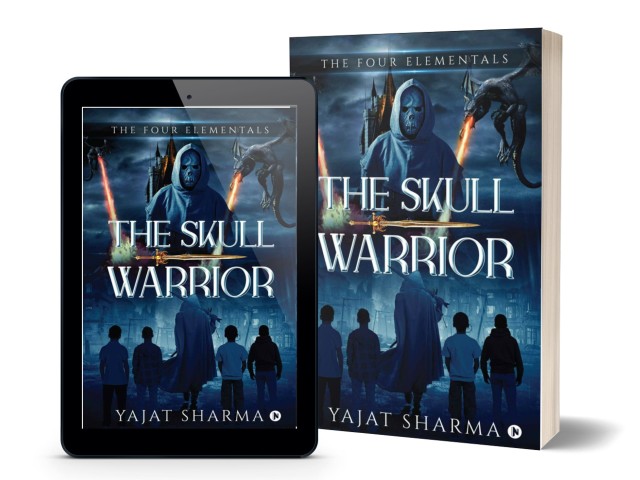 You can clearly see the cover page distinguishing itself into two parts. In the bottom segment you see 4 kids and a warrior with sword approaching a place. They are the protagonists. If you have read the previous book in the series, you will know that the warrior with the sword is “The Scavenger”.

In the top segment, in addition to a fire emitting lethal creature, you see a hooded figure, whose face resembles the facial structure made from the bones. Yes, he is the antagonist, “The Skull Warrior”.

The bluish dark background reflects the fictional places explores in the book and gives a mysterious look to the cover page.

After solving the mystery of “The Arcane Crown”, Matt, James, Archer and Daniel are back on the Earth. But before they could manage to enjoy more days, another adventure was waiting for them! Yes, “The Scavenger” contacted them after 7 days of their return, via a dream. The situation in the dark work is very challenging.

The Dark Lord, despite being captive, was able to suck the power of the Arcane Crown. And though he is still captive, if he get enough support form his loyal “The Skull Warrior”, he could get himself released!

Is there even darker time waiting for the dark world? The Scavenger is trying hard to keep the dark world safe, but, he seems had fought so many wars and he is at his wit’s end. It seemed that the time is ripe to summon the possessors of elemental power to help him save the Dark World and the Earth.

To add to that, to defeat the Skull Warrior the team needs to have/perform the following:

And the quest to find them/perform it, is challenging. It is quite possible that some of them, or at least a few of them may lose their lives during the same.

Will the kids agree to help him? Their journey would be no less than a year, so how will they convince their parents for the same? Well, you need to read the book to get the answers.

I found the book a convincing and thrilling sequel to “Quest For The Arcane Crown”. The author’s writing style remains the same so you will get the feel of continue reading the same book.

It would be even more challenging to write a sequel to a book that explored a fantasy world. If the dots are not connected, the reader will find it unconvincing. It seems that the entire story was already there in author’s mind altogether, as a summarized concept and he has distinguished a large story in 3 parts. This level of integrity in the books of a series shows the maturity of the author.

The author has nicely weaved references to the COVID-19 situation and online classes in the story. This way the contemporariness is present in this fantasy story. Here is a line from the book in the same regards.

Due to COVID-19, the schools had shifted to online mode, but there was no let down in discipline.

And, the author doesn’t let a chance to mention it in funny conversation between the kids.

The book starts with how the kids are contacted by The Scavenger in a week of returning from the Dark world. The way he contact the kids is something magical. Also, what “big” is happened is so much less time in the Dark World? Also, the kids are expected to be there for around 1 year! How will they remain there? What about their studies? How will they convince their parents. How can they think this:

“Well, so what? Exactly what would we face when we come back to Earth? Just scolding from our parents. That’s a small price to pay for saving the world.”

Well, the answer lies in the difference between the timelines of Earth and The Dark World. And of course, their work is very important too. One doesn’t get the opportunity, power, courage and support daily right?

If the antagonist in this book was less powerful than he is in the previous book, the book could have been a disappointment to many readers. Fortunately, the loyal follower of the Dark Lord – The Skull Warrior is powerful. And, he doesn’t keep appearing throughout. Yes, he appears at the end of the quest to find him, but his virtual presence remains throughout. The antagonists, the team has to fight, are very powerful and posses magical and physical abilities. The most common mistake an author (or a creator) can make is painting the hero powerful and doesn’t give enough footage to the antagonists. Actually, when you make the antagonists convincingly powerful, you indirectly make the protagonists even more powerful. Yajat – the author knows it.

“Hothel lives deep under the sea of Trion. The first problem: you can’t reach there. You’re not fish. You can’t breathe in water.”

He’s the King of the undead. And he’s quite real. The problem is that he favours evil and chaos. Also, he locked us up in tomb made up of bones.

A book with adventures and thrills throughout, often becomes dull. But, that is not the case with almost all popular young-adult fictions. Because, the respective authors have added the dose of sarcasm and fun into them. This book is no exception.

“By the way, thanks for being so happy to see us,” James said sarcastically.
The Scavenger looked at him quizzically. “What?”
“Aargh!” James shrieked. “Some gratitude for us?”
“Oh. Well. thanks for coming?”

Some of the characters here are funny and they don’t shy away when they require attention :). And in the contrast of these light conversations, there are some wisdom lines too.

No one is evil or good. It is just context.

Keep doing good. It will come back to you in ways you can never imagine.

The author also came up with some mystical gadgets like the Magic Compartment.

It is a small boxlike thing in the air. It is advantageous because no one can another’s magic Compartment. Only the ridiculously powerful sorcerers can. And they can only enter it if…

Not everything is just magical, the author brings in some stuff related to science and technology also, to make the things more logical.

“Sodium thiopental,” he pronounced. “In other words, a truth potion”

The only way to disable the security measure was to sabotage the control panel.

And, the author grabs opportunity to mention his favourite detective when get a chance :).

It didn’t take a Sherlock Holmes to figure out that it was the Poison.

The Slayer doesn’t exist, but it does.

The book contains some lines that almost every reader will find interesting. The way the characters’ given names are in contrast with their attributes – shows the author’s imagination to implant a healthy humour.

“I am Crimson,” the man said. He gestured to a skinny man standing on his left. “He is Fat.” Then he turned to a gigantic man to his right. “and he is Tiny. Both are my guards.”

The author also re-instates the fact that you don’t know the answers to all questions from the very beginning. you need to walk the path to know it better and find what hurdles could be there.

There are so many characters in the book, and you will remember some of them by now. You will meet some many new characters like: Lynx (also known as Man of the Rock), Mort, Aronicle (remember, he gave the elemental powers to the kids in the first book), Urrax, the Warhead, Huro, the Knight, No One, Bones, Elvir, Stonehound, Hellfire, Voldmir, The Amanthian Devil, The Jaw of Death, The Devil of the Lake, The Scoshag, The Tyhorox, the King of the undead, Oni, Paragon, Super Wolf.

There are clans like: The Red Warriors, The Wolf Hunters, The Undeads and others.

There are some fictional places like: The Pain Trail, Diamond Path, Frostbite Caves, Village of Silver, Village of Shimo, Village of Shil, Village of Fuelon, Opal city, Gokru Lake, the Castle of Fate, Slorm, the Sands of Destiny and others…

So, it is a worthy sequel of “Quest for the Arcane Crown” for sure.

To make the book even better, the author could have included a glossary. And some typographical/proofreading error like the following could have been taken care of.

I c could get used to this name.” James sighed. “But don’t you guys feel we have wasted a lot of time already? Let’s go.”

But, overall, a very imaginative (where you can find parallels to famous stories like Harry Potter, adventure tales of Famous Five, etc) tale by a talented author who is more seasoned than his physical age.

And yes, don’t forget to take a sneak peek into the third book of the series by following the link below:

A fantastically written sequel to its predecessor. The trilogy seems to be worth reading as a “whole”. Awaiting eagerly to read the third book in the series