Writing a convincing fantasy fiction is not an easy job. But, if you write it convincingly, often it surpass your own expectations. The way people have warmly welcomed the famous Harry Potter series by J K Rowling has proved that even the modern day readers of all age group loves exploring the Magical world of fantasy.

These books are not only a commercial or cinematic (in terms of films and TV Series and even stage plays) adaptation, but the readers have emotionally attached themselves with the fictional characters and incidents of the book series. And, it fuelled the burning desire of writing something fresh and imaginative in many creative fellows around the world.

Recently, we came across the works of Yajat Sharma, a very young and enthusiastic fellow, who dared to pen down a trilogy in the same arena! Friends, we are referring here The Four Elementals Trilogy by him, His parents should be definitely appreciated for giving him the support he required. But, ultimately, the author’s talent matters. And, that’s why, in this review article, I am not going to mention the age of the author or consider it when sharing my views and reviews for various elements of the book. Because, (1)For a reader, the end product is important and not the age of the author and more importantly (2)It would be injustice with the talent of the author.

By the way, we are privileged to share a sneak peak from the third book of the series.

From Team ThinkerViews, I got a chance to read the first book in the series Quest For The Arcane Crown (and, I am going to read the rest of the books in the series, for sure 🙂 ). Here are my uninfluenced views about the same.

A book cover is the gateway to the virtual world explored in the following pages. And, thus it is responsible for making the first impression of the same. Of course, it should not be the only factor for judging the book, but it definitely plays an important role, consciously or subconsciously. 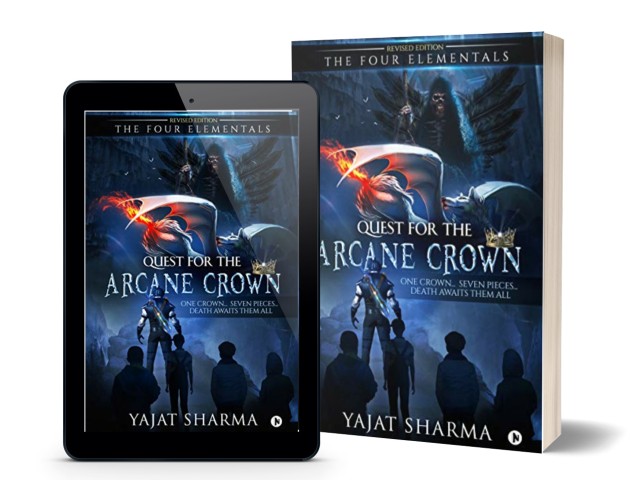 The cover page uses the dark theme. And, the most of the story refers to “The Dark World” and “The Dark Lord”, it suits quite well. Four children shown looking at a giant fellow (who looks more like a robotic toy than a menacing fighter) – is taken from a very important scene. The flying giant bird and the illustration of the antagonist adds to the details.

The cover designer has tried well to put together many elements of the story on the cover page. If a little cheerful colors are used for some elements, it could have been more impressive.

A long ago, there lived a magician named Lord Arcane. He was a great sorcerer who worked a lot in finding the right substance for the nectar of immortality. And he got to have a few drops of a very promising one.

All his powers comes from a “Magical Crown”.

Eventually, he came to know about a prophecy conveying the rise of the dark times after a few centuries. The antagonist who will rise can use the powers of this magical crown to wreak havoc not only in the Dark World but also on the Earth. So, he broke down the crown into 7 pieces and hid them at 7 different places. He has appointed 7 protectors, one for for each of the pieces. All the protectors had given one drop of the nectar. So they remain strong and live long enough to keep each piece of the crown secure.

Until, of course, the worthy successor of the crown, who can reestablish the blooming and blossoming time. He envisioned his son or grandson to be that worthy successor, but, he didn’t share the secret location of the crown-pieces with him also. He believed that if he is worthy, he will find a way to solve the riddle to find the first piece of crown. There he will get one more riddle to find the second piece and so on. Here is one such riddle:

What is the place
That clams your mind,
Its subdues your anger,
And makes you shine.

The Scavenger – is his ray of light. He trained him to be the best warrior in the Dark World. He loved him like his own son and given him the responsibility to bring in the four kids from the earth – the chosen ones – to brought the Dark World out of Dark times when needed and till then help his successor on the throne to administer the Dark World, and keep it secure.

Will the Dark Lord actually rise? Is there any truth in the prophecy? Who will be the chosen ones, the prophecy talked about? Will the Scavenger be able to fulfil his promise? All these questions can be answered by reading the book.

The book is an interesting experience to read. The author’s imagination amazed me as a reader. Of course, we can draw parallels to many things with the popular stories (like Harry Potter, Narnia, and others), without a doubt. But, it stays there as an inspiration. The exploration of those attributes is author’s imagination, and I liked it.

We, humans, always join the quest of finding a way to overcome the “death”. The only and inevitable truth. If you look at the Indian (that is Bharatiya) mythology, the Samudra-Manthan (the ocean-churning) episode is also the quest for “Amrut” (or Amrit – the nectar of immortality). Then comes the concept of partitioning a soul. So, a person can remain alive even a part of the same is destroyed. The concept explored in the Harry Potter series is also about 7 Horcruxes.

The author takes his time in establishing the setup of the story. The initial part of the story reveals enough details about the fictional “Dark World”, Lord Arcane, The Scavenger, Mascase and even Raven.

The reader is then taken to the modern world Europe. Four kids – Archer, Daniel, James, and Matt are introduced. They are living a typical normal life. The author infuses daily humour in their conversation quite effectively.

“Hi, Daniel,”Archer said cheerfully.
“Good morning, Archer,”Daniel replied. “You seem to be in a good mood today. Don’t you remember? We have the weekly math test today.”
“Oh, I completely forgot!”Archer exclaimed. “Now I am feeling the tension!””

It reminds you of day to day conversation amongst young students around you, right? Fun, humour, satire and the good(!) study days :).

Studying in the same class, they both dreaded the monster that was mathematics.

Some such lines make the experience of reading this thriller even better.

I also like the way the author introduces various attributes of the characters. For example

And to complete the spectrum of childhood, there are guys like Luke and Robby. And Luke’s mother will remind you of Jian’s mother (from Doraemon). And yes, there is Mr. Robert, a teacher, Logan and others.

The trip to Transylvania plays an important part in the store. And, there too you can find some funny lines.

So, it seems that you are transferred from the Dark World to the modern day TV Show, right? Actually, it shows the canvas of the story. And, the character building lines are not only for the kids or Earthly characters. The reason the Scavenger is named so, how he is trained by the Lord Arcane himself, how he was awarded the title of “Shadow Warrior” and why he decided to rather be known as “the Scavenger” only; the transformation of Raven, the character of Pharaoh and the important role he plays, are all worth reading.

I also like the logical way the Death Lord was named so. And yes, the “Death Curse” will make you remember something from the popular tale of Harry Potter :). And, to add to that, there is a concept of Necromancer. In author’s words:

He is a Necromancer and can create his duplicate. Use of Necromancy turns one’s soul dark.

And yes, the characters take “Blood oath” too.

Over the course of the story you will find interesting tribes like:
People of the Clan of Daggers, Clan of RedPythons, the Night Riders The Ninjas, The Samurais, the Panthers,…

Places like:
Forest of Gloom, Palace of Unicorns, Coast of Robbers, Cliff of Thieves, Tomb of Death, Tiger’s Hide, Land of magic,…

By this you can get an idea about how imaginative the author could have gone in the book.

Millennia ago, there lived a great magician named Lord Arcane. He was one of the most legendary wizards of all time. He derived his powers from a mystical and magical crown. …

One day, he decided to visit the Dark World mentally to check out the situation there. He sat silently in a park and meditated. By now, he had got a good idea about human life. Humans were always busy. They were not bothered about some old loser sitting on a park bench.

And, some simple yet effective lines that almost create a visual representation of the scene.

The children woke up yawning but were soon bubbling with excitement as the plane landed.
— — — — — —
The Scavenger allowed them the luxury of only ten more minutes to recover.

The book has some war related advices:

… always keep your eyes on your opponent’s body and his sword. Forget the audience.

Of course, I need to skip a lot of elements of the story to avoid spoilers, but I think the quotes above will give you a fair idea about the story explored in the book, and quality of writing you can expect.

And, why the series is named “The Four Elementals”, well, I can tell you that the four elemental powers, Power of Fire, Power of Earth, Power of Wind, and Power of Water are integral part of the story.

If the author has added Glossary for the names of characters and places, it could have been even better. Some sentences also could have refactored. But, they are minor elements and doesn’t affect your reading experience by an large.

Overall, a book that meets the expectations. A complete fantasy-fiction that I am sure you will enjoy.