The Sea of Innocence by Kishwar Desai | Book Review

Posted by: Editor June 1, 2022 in Books, English Leave a comment

While reading is for entertainment and escape, it is also for introspection when it comes to most people who love to read – whether it is through newspaper columns providing critique on current affairs, magazines or books. In fact, sometimes the relatively slower narrative of a book gives the readers the time to process all aspects of what could be published as headlines and is thrust via media on their awareness through constant barrage of sensational storyline and shocking images.

One of such attempts is Kishwar Desai’s book The Sea of Innocence, which was published in 2013 with a dedication to numerous women in India who lose their happiness and lives to assaults and sexual violence, with a mention of Nirbhaya case, which shocked all of India.

Recently, I read this book for Team Thinkerviews and liked it for the attempt it makes at building a canvas of how we, as a country and as a society, struggle with the changing expectations as the world changes around us to find the balance between traditional and liberal behaviours. 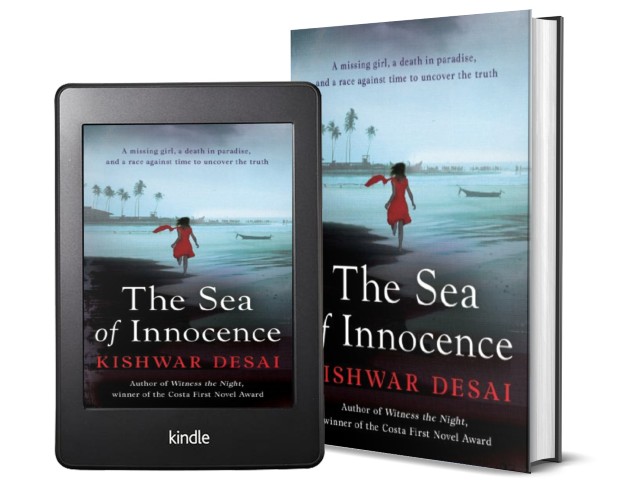 The Sea of Innocence by Kishwar Desai | Book Cover

The tagline reads A missing girl, A death in paradise, and A race against time to uncover the truth.

The book is a hard read about brutalities against women, about taking away the innocent from a girl. The young girl carelessly enjoying her time on the beach represents the innocence quite well. The red color in her dress reflects the violence in an effective way. The outlook reflects a beach on Goa, the place where the story is set up.

A well thought cover page which may not stand out when the book is encircled with compendium of other books, but is impactful on the second glance for sure.

But the idyll is disturbed very soon as the videos appear on her phone and her friend Amarjit arrives from Delhi asking her to take on the investigation. The girl in the video is British teenager Liza Kay who has disappeared and now these videos are making a stir amongst the authorities and causing concern. Simran is reluctant, but soon she is sucked into the world of this little conspiracy as shadowy figures are starting appear around wherever they go and she gets worried about the security of her daughter and her friends.

As she starts talking to Liza’s sister Marian, the shack owners and staff around the beach and the beach vendors including Veeramma, she is fed one story after another that doesn’t quite match. She is given drugs and left to wander the rocky beach, her phone and laptop are wiped out and very soon she is starting to become part of the world of the government minister Vinay Gupta who seems to be connected to the case.

More brutal videos appear on her phone, showing Liza’s rape and death. And then suddenly she is told to drop the investigation. By now, Simran is too involved to let it go. She keeps working on the case and eventually gets a video showing Marian’s death.

What is the truth in this case? Who was Liza and how long ago did she disappear? Is she dead or alive? Are the videos real or fake?

Let’s start with setting of the book – the popular holiday destination Goa. It has been on the tourism maps for international and now domestic tourists looking for a relaxing holiday for decades now. The tagline for the book says a death in paradise and that’s how the author tries to build the beach life of idyllic Goan seashore with beach shacks, seafood, beer, henna tattoos and frolicking in the water.

But she also shares the darker edge of these beaches, where alcohol and drugs flow freely, girls disappear and drown and while everyone seems to know everything, no one is allowed to talk about it:

In the few days we had been there, we had realized that a well-oiled, systematic food chain existed. The tragedy was that no matter who postured as the biggest fish, there were others still larger than them.

There was an uncomfortable and very apparent dichotomy between life on the beach and the rest of Goa. The sandy rim of the sea seemed almost like another country, which was, for some, ruled by its own laws of behaviour. Even though the beached looked serenely cosmopolitan on the surface and offered a variety of sea sports and other innocent pleasures, there was a looming darkness around the edges.

And that darkness is not only in Goa, but all the rest of India which makes the transition to urbanization, leaving behind ancestral farms and focusing on professional education:

Along with rapid urbanization had arrived the desire for wealth and white-collar employment, especially among the youth, many of whom had found job opportunities abroad. The ones who were left behind flocked to the beaches to make their fortune, and also to have some fun. Their upbringing might have been strictly traditional, linked to the churches, the temples and the mosques, but their interaction with the outside world would change them. The holiday atmosphere of the beach, with its indolent  and relaxed ambience, created a false image of life as it should be. And quite soon the indolence became the aspiration.

And that leads to current struggle between capitalist and socialist ways of lives in India. Suddenly, your life is at mercy of so many outward forces that your peaceful existence can be wiped away in no time. If you try to become part of the glamorous world that hides criminality, you also have to pay the price.

You either got involved or you stayed away from the beach entirely. But either way you ran a risk of being attacked by the sharks in the water and mauled by the wolves on land.

Kishwar Desai is a columnist and she doesn’t always lose that edge when she analyses and describes the situations in the book. As she works up the second dominant thread about crimes against women, the narrative for the videos and abuse situations is really gritty. But then the book flounders a bit in terms of pace when she wonders about the institutionalized attitudes and violence against women in India and the wider world. No matter where they grow up, little girls go from playing with toys to being seen as playthings themselves while they are barely adults.

And the rapid commercialization wanting to sell a certain image – whether it is a Barbie or the ideal housewife – all focus way too much on the physical appearance and a projected image of the person rather than the personality itself.

Why did these young girls become the innocent targets of such bizarre violence? It seemed as though girls today were caught between peer pressure, commerce and tradition, depending on which part of the world they grew up in. Whether orthodox or extremely liberal, girls would be victimized by their own culture.

The characters are a good mix of tourists and residents. Simran Singh has appeared in both previous books by the author, so there is not much of a background story required here for the readers familiar with the series, but some of her musings about being single are getting a bit repetitive, although still funny.

She is, however, the perfect contrast from idle tourists in Goa. Rest of the characters do their bits – Marian is flaky, but that is in line with her character. Vicky is the other strong female character who displays yet another side of modern Indian women who give up a lot at young age for material progress, but are unsure how to get out when it all becomes too much.

The police and political systems are shown with some bad characters and some good ones. But the way the book goes around trying to achieve the justice is also questionable. How is obsessively filming a girl better than catcalling, teasing and unwanted advances?

This book has been written in patches as the author’s notes say, and that leads to occasional slackness and loose ends. And it falls a little short of the previous two books by the author which also featured controversial topics – Witness of Night and Origins of love. There are also some typographical errors and inconsistencies in timeline, which can be removed with better editing.

In summary, this is a murder mystery set in idyllic holiday destination that tries to highlight how darkness can lurk in corners of sunny beaches and greed for money and power can ruin innocent lives.