Futuristic science fiction remains one of the most favourite genres for Team Thinkerviews and we enjoy searching and reading more and more of such books. Recently, looking for an audiobook to listen to on our journeys, I came across this fantastic series of books by Amie Kaufman and Jay Kristoff. The first book in the series Illuminae – The Illuminae Files -01 was first published in 2015, and since has been followed by equally successful installments called Gemina, Obsidio and a prequel Memento.

I have enjoyed these books and here are my thoughts on it on behalf of Team Thinkerviews. 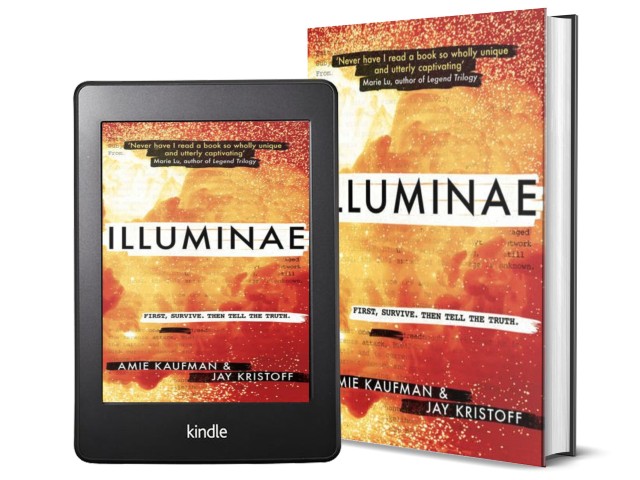 The book is quite an eye-catcher, giving us a pause to think about the effect of cover pages and packaging on browsers and readers perusing bookshelves looking for the next read.

One of the most appealing thing about this book is how it is set-up in terms of structure, and the cover page gives you hints of it. Featuring a background in shades of fiery and explosive red to orange are shown scratches of text. The look of this text pieces is like burnt fragments flying in the wind, or the lottery stickers scratched with a coin. The cover also features one of the best lines from the book:

First, survive. Then tell the truth.

The year is 2575, the place is an obscure corner in the forgotten part of the universe called Kerenza, which only interesting enough because of the illegal mining operations. Kady Grant and Ezra Mason are facing a difficult day at school due to their extremely recent break-up, when their world is literally torn apart by attacking warships.

Kady and Ezra end up in Kady’s car and eventually one of the few lucky survivors to make it to the Alexander – part of the rescue fleet. Eventually though, the survivors are separated as Ezra is called on to join the defense crew, while their spaceships are on the run. Named The Alexander and science ship Hypatia, these ships slowly become places of a disaster even bigger then their lost planet.

You see, the attacking giant corporation of Beitech industries used bio-weapons on Kerenza. This included a mutating virus called Phobos, and everyone who was exposed to this is now turning into murdering madman. And hundreds of mad people, trapped on a ship with no escape, means, eventually there will be no one left alive. As if this is not a disaster enough, the spaceship’s artificial intelligence control AIDAN appears to be trying to kill every single soul on the ship.

AIDAN has successfully destroyed another ship in their own fleet called Copernicus already and there seems to be no different end in sight for the Alexander.

While the information on Phobos is slowly discovered and dealt with by medical personnel, they are all aware of the Beitech Dreadknots on their tails – including the leader ship called Lincoln. Arrival of Lincoln will mean nuclear death for both Alexander and Hypatia – crippled as they are.

With no safety inside or outside, the universe is really not big enough to escape death…

The series is the futuristic sci-fi with so many interesting elements and the story of survival outlined above is only the core of the book. There are so many characters and life threads wound around Kady and Ezra. At the start of the book, they are teenagers looking at life in a somewhat abstract way of the young. But the attack brings it all down to mere survival. While Ezra is more drawn towards the official defense through armed forces, Kady is the rebel. She is the one who hacks into all forbidden systems to find out information no matter what it contains and where it will lead her.

The surroundings are extremely dangerous, what with the nuclear attacks, mutating pathogenic viruses and dwindling hope with the ship AI gone rogue. With every passing minute, they are losing friends and family, people they have known and loved. The harshest part is that they are losing friends they have barely made, like Kady’s mentor in hacking – Byron Zhang. On top of this, there comes a moment when she realizes that she has been tricked, that nothing is as she thought it was and that she has lost everything and everyone she thought she ever had. That’s when you wonder why Kady would go on.

And so the authors have a lot of lines wondering about humans and humanity and why we do what we do – our strength, our weaknesses, our obsessions, our frailties, our perverse tendency to repeat our mistakes again and again until we seem to make no progress as time passes by. But the book also packs enough entertainment and fair bit of violence (with the continuous warfare – inside and out – and madness inducing virus that makes little girls tear out hearts of their victims (beware young readers!).

Now, if it all seems like a lot to take in one book, it is not. Because the book is not told like a usual story. It is presented as a collection of a hacker’s chronicles – so it has memos, e-mails, chats, message boards, analyst survey records, etc. and also drawings, maps and pictures to tell you the whole tale layer by layer. As you can imagine, that means there are not many usual dialogues or drama situations, either.

The writers strike a very good witty, funny, bantering notes in the chats and messages though. Also, the analyst survey reports are not all heavy and bureaucratic but packed with individual comments and criticism. And there is an occasional deep note like below

Miracles are statistical improbabilities. And fate is an illusion humanity uses to comfort itself in the dark. There are no absolutes in life, save death.

And the audiobook version on Bolinda platforms was really delightful with multiple readers and narrators making an enjoyable, dramatic version of events. They make it really fun to listen to the teenage chats and surveillance videos while making the seriousness of the situation just as equally apparent.

In summary, this is a funny, adventurous and deeply heart-warming saga  of survival for admirers of futuristic science fiction and space travel lovers.

Previous: She Will Build Him A City by Raj Kamal Jha | Book Review
Next: The Sea of Innocence by Kishwar Desai | Book Review