Imagination is the gift that leads to storytelling and some of the most entertaining and wonderful stories take place in the worlds built entirely in the fantasyland created by their authors. Here, at ThinkerViews, we routinely read fantastic literature as we enjoy the magical worlds within those just as much as a crime thriller or a literary tale of contemporary times.
In our reading list for 2021, we had marked out a series of books called The Empirium Trilogy by author Claire Legrand. We have finally finished reading this epic series and so let us share with you the review for three books in this series, called: Furyborn, Kingsbane and Lightbringer.

Let us take a look at the gateway of this interesting virtual world – the cover pages of the books in the series :). 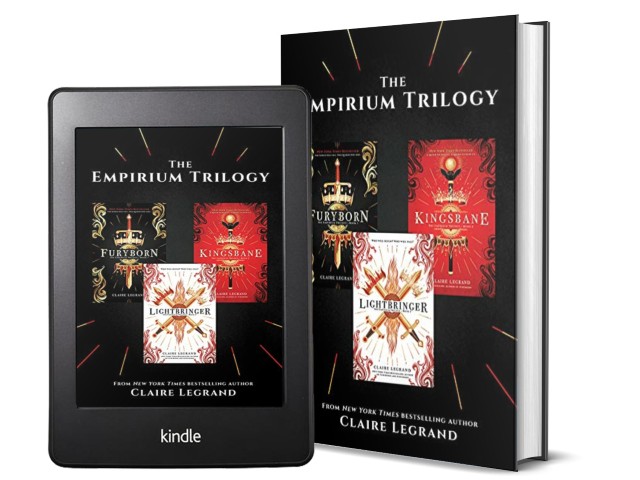 Overall, each cover page has its own attributes worth to take a note for.

In a world called Avitas, there are many great countries, but the heart of our story takes place in kingdom of Celdaria.

Rielle Dardenne has grown up in Celdaria, within King Bastien’s castle Bainegard, with two best friends -Prince Audric and Lady Ludivine. But she has a secret that she hides from them. Just as she hides it from everyone in this world where humans can wield one of seven magical elemental powers – Sun, Earth, Air, Water, Fire, Metal and Shadows. While most humans can access the power of only one element, and that too with help of a channeling tool called a casting, Rielle can call upon all elements and without any aid. But when she was a child, her power got out of her control and she set their house on fire. Her mother died in that fire and since that day, Rielle’s father has done everything he can to keep her power suppressed.

But on the fateful day of the Boon Race, Rielle ends up displaying her power, rather spectacularly to the whole kingdom and so now she must follow a path where she is left with but one choice.

You see, there is a prophecy, which states that the peace that Avitas has enjoyed for a thousand years is about to shatter. A thousand years ago, the races of Humans and Angels living in Avitas went to war. To end the war, the human Saints banished the angels into the Deep and the only thing that keeps them in there is a Gate. But after a thousand years, they are ready to leave their prison and they will be aided by a very powerful human Queen. Is Rielle that Queen then?

But the prophecy speaks of two queens – a Blood Queen and a Sun Queen….

So, then another thousand years later, we are in the kingdom of Ventera when we meet Eliana. A bounty hunter, who lives off her cunning, her knives and her wits and also has deep dark secrets to hide. When her mother is kidnapped, she makes a bargain with another fearsome hunter – the Wolf, part of rebellious army against the Undying Empire. But she is hardly prepared for the dark places this bargain is going to lead to and the unending bloodshed she will not only witness but inflict. She strongly believes that there is nothing good inside her, but is she right? Why then the world around her believes her to be the Queen that will redeem the world from the ashes of what it once was?

Let me start by saying that the storyline above is just the premise for a trilogy that spans over a thousand pages and brings you to a world filled with history, magic, heartache and great adventures. At the heart of it is the basic question of there being no black and white boundaries when it comes to humans. To force a person to be just good or just evil is taking away from them a world of choices and forcing them into a skin that doesn’t fit them. Instead of calling them a Blood Queen and a Sun Queen, only if we could see the One Blood and the One light that binds them……After all

The strength of the writing here is the world of Avitas, elaborated and sketched in details that is breathtaking in its richness and beauty. The map of the world showing the nations of Celdaria, Astavar, Borsvall, Ventera, Meridian and the other nations is very handy to refer to as the characters move across their oceans as well the centuries that part them. The author gives us lovely descriptions of each element, and the temples and ways of worship built around each. There are magical beasts and stone castles, ferocious warriors and fearsome lovers.

The characters are all compelling, but the centre of attention of course are Rielle and Eliana. Both possessing power beyond understanding, but both flawed, both making choices that lead to paths of self-destruction as well as world-ending disasters. Neither of them perfect and most readers prefer one over another, but neither of them can be ignored. While Rielle and Eliana are the ones on centre stage, there are also countless other characters who shine through with their bravery, courage, loyalty and capacity to love. Love and grieve for centuries, be tortured again and again, live and die when required for their loved ones and rise again and again:

Revolutions mean nothing if their soldiers forget to care for the people they are fighting to save.

My story is the same as all other. Everyone I love has died; all my nightmares have come to life. Our world is lost, and so are we.

What does magic feel like? Like all pieces of who I am are coming together as they were meant to. Like anything is possible, in that moment, for my focus is that complete and controlled.

While the elemental magic and the characters are interesting enough, and there is some novelty in the way the author has created the species of angels with their ageless and extremely powerful minds, there are a lot of elements that are also an echo of a lot of other works. For example, the Deep is comparable to a chasm between the worlds in something akin to a multiverse. And the Empirium itself reminded me of how we think of dark matter or ‘Dust’ in Philip Pullman’s “His Dark Materials” series. The windows Eliana carves out in fabric of the worlds reminded me of The Subtle Knife of the same series which allows access from one world to another.

Another interesting twist is the time travel. This is one of the most intriguing part of the book and by the end of Furyborn, you start imagining how it is all going to come together. Claire Legrand does a good job of combining so many interesting threads and puts her characters through trial after trial until they can remake themselves after every breaking.

With its huge scale and detailed story-telling, the trilogy makes a few days’ worth of reading. However, there is a set of audiobooks available for those who would prefer to listen to it on the run. I listened to the Borrowbox audio version read by Fiona Hardingham.

A grand world filled with lovely, great and magical characters that will make you fall in love with them and break your heart a litter over the human tendency to somehow always lead to a war rather than peace.

Previous: The Sea of Innocence by Kishwar Desai | Book Review
Next: The Christmas Pig by J K Rowling | Book Review