Mukul Deva is a retired officer of the Indian Armed Forces. After retirement, he started writing books and conducting various seminars and is also associated with corporate training. He currently lives in Singapore. Though he also writes Management oriented books, from our team, I have got a chance to read his Military thriller – RIP – which is a military thriller. I like the book and you can find our unbiased book review at the below mentioned link:

Recently I got a chance to read another book by him, Pound Of Flesh. It is a Crime Thriller cum Police Procedural featuring Ravinder Gill as one of the lead characters. As the name suggests, this book exposes some heinous crimes of women trafficking. On one end we tend to tell “यत्र नार्यस्तु पूज्यन्ते रमन्ते तत्र देवता” and on the other, we don’t consider females anything more than a “Pound Of Flesh”! Isn’t it ironic?!! Well, this is how the fabric of society is weaved. You can find all kinds of people in the world, having a number of (definitely more than 50 🙂 Shades of grey cover the spectrum of Black and White.

We at ThinkerViews firmly believe that a book should not be judged (only) by its cover. At the same time, we acknowledge the influence and impact of the book cover on purchase and/or reading decisions. 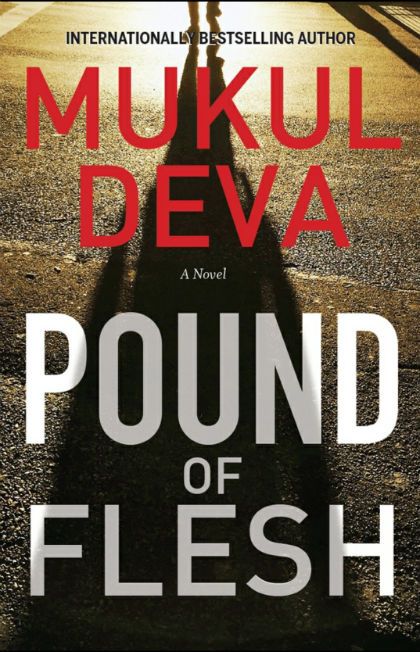 The book deals in dark subjects like human trafficking and organ theft, the cover page could have been made quite quirky and graphical. The designer, however, did the things quite logically and avoided such stuff. The book shows a shadow of a shady character along with the glimpses of the bottom half of his legs. The color scheme and the exploration is quite good. It goes with the theme of the book and is attractive too. Personally speaking, I like the cover page.

It all starts with a typical day (as it seems) in the life of Ravinder Singh Gill, a retired police officer, now lives happily(!) with his daughter Jasmine at his farmhouse in Satbari on the outskirts of Delhi. One of Jasmine’s best friends is coming from the USA to pay her a visit. It is her first visit to India and she was quite uncomfortable. She and her mother has heard a lot of worrying things about India. Jasmine reassured her and comforted her that India is actually a country worth living in. And, her driver will pick her directly from IG airport. So, she shouldn’t worry.

Things happen in the way they are prone to, not as we plan to.

The driver stuck in the traffic and has informed Jasmine that it will take him more time to reach the airport. Jasmine tried informing her friend. She has also informed her dad – Ravinder who is at his office. Ravinder conveyed displeasure and give a couple of lessons to her daughter, like any other caring, loving, practical and worrying father. And, he, after taking his medicines left for the airport.

The American girl caught an eye of Santosh Kumar aka SK, who is also arrived from a different flight. SK is someone you don’t want to meet. In addition to being a killer and being the right hand of Harpal, an influential politician; he started his ventures into the organ stealing and selling business. He is partnered with Amit, a doctor with excellent skills but motivated to walk on the wrong side of the law, in order to earn quick money.

Considering SK as the driver sent by Jasmine, the poor American girl made the biggest mistake of her life. She went ahead and sit in the car with SK, joined by Amit. The main aim of SK is to prepare the girl to be served to various politicians and influential figures and after sometime kill her to collect her organs and sell it at huge prices!

What will happen to the American girl? How Harpal and SK will deal with the situation? What will Ravinder do?

Well, all these questions are answered better in the book :).

Pound Of Flesh is quite a detailed book spread over in 43 chapters distinguished into 4 segments.

The book is a good thriller where the shades of characters are explored gradually. Like other crime thrillers, this one also has its share or sarcastic punchlines which are often hard to digest but explores a bitter truth. Here are some examples:

The author is good at exploring scenes. Sometimes you will feel the visuals are passing in front of your eyes when reading various of them. Here is an example:

It as a double-storeyed house built on a tiny plot of land, about twenty feet by forty feet. It had seen better days a decade ago; the paint had faded and large patches of cement had fallen away, revealing the single brick walls. The four windows facing the alley in front, two on each floor, were closed. The ground floor windows had a wooden door between it, also closed. The door was painted bright green, its fresh paint merely serving to accentuate the otherwise sorry state of the house…

The author is good at wordplays and you can find them appearing quite often. Here is an example.

The powerful Lexus engine began to chew up the miles.

The book has some really good fighting scenes where details are difficult to be missed.

But the speed of SK’s response stunned her. He blocked the blow aimed at his jugular. Twisted away such that her kick aimed at his balls, landed harmlessly on his thing. Then his right hand sung out, in a fierce sweeping blow, powerful enough to knock her senseless, if it had landed.

And yes, there are some emotional scenes where the author managed to explore sorrow, happiness, and philosophical stuff in a convincing manner.

Here are some interesting lines I found in the book which talks about the way of living one should follow.

Being a thriller, the book deals with the human psyche in quite an effective way in terms of exploration.

The book deals with a tricky subject and there were chances of having a heavy dose of adult material. The author, however, has wisely avoided profanity and apart from having a few cuss words, the book doesn’t have anything in that arena. Of course, being a thriller associated with crimes the book is for the mature readers only.

The story also explores the dark side of politics. It is said that to become a successful politician and wealth earner you must need to crosse the line (of law) at least for a few lines. And, that’s why each of the persons at the top in these two fields has some skeletons buried into the past. Of course, there are exceptions. You can see the positive and negative both types of people in almost every profession and the police department is not an exception. In this book also, both the types of police officials are there. Same with NGOs. Some NGOs really work hard for the betterment of society while some of them are doing money laundering and other such illegal activities, which affect the general perception of NGOs in a layman’s mind.

The book has some sarcastic lines which will bring a smile to your face while reading them.

One attribute I like about the book is, the prime characters of this book are quite human. They are not superheroes who can do unimaginable things. They have their vulnerabilities and they are over-smarted by the people on the wrong side at places.

The quotes above must have given you a good idea of the quality of writing you can expect in the book.

The thrilling moments are there throughout the book, and, you often pray that nothing wrong should have happened to those who are on the right side. You may not like the end of the book and you may want it to be a “happy ending story”. But, the author has his own reasons for the climax and the definition of “happy ending”.

Telling more will include spoilers, so I need to stop here.

Overall a convincing thriller which has dark shades. If you like thrillers you will enjoy reading this book.

Previous: The Rule Breakers by Preeti Shenoy | Book Review
Next: The Third Eye And Other Tales By Sumana D Chowdhury | Sneak Peek