Posted by: Editor2 January 2, 2020 in Books, English Leave a comment

Why we are attracted to the fantasy tales explored in the movies, TV Serials, Books, Magazines and other media? We all are mature enough to know that the stuff explored there is not real, but still it attracts us. Possibly because, we want to live the life we want in the way we want, and we know that in reality (at least the large part of that) it is not possible. We are possibly living those moments, unfulfilled wishes and fantasies with the characters of the media.

Not only films, but we adore the film stars also. They do the stuff on the screen, which we want to in real life, but we can’t. Possibly, that’s why we call them “heroes”. There is an ample amount of curiosity, love, and admiration filled in our hearts for those actors in our hearts. We, more often than not, envy the life they are living. We consider that everything is so fantastic in the lives of those who are associated with the glamour world.

We, however, need to know that “all that glitters is not gold”. The inner lives of those celebrities are not known to us. Apart from demanding schedules, deadlines to meet, and keep themselves presentable, always, is a very difficult task. Sometimes, they have their own demons to fight with. It is not always easy to remain detached from one’s own avatar on screen. It sometimes draws the performer toward insanity!

It is famous that after doing so many tragic films, Dilip Kumar got the label of a “tragedy king”. But, doing those films in a successive order also started dragging him towards the depression and he was asked to do “light” films. That advise lead him to act in movies like Ram Aur Shyam and others.

How about a thriller associated with the people of the glamour world?

A while ago I read The Nidhi Kapoor Story by author Saurabh Garg, and I found he explored the thriller in a really convincing way. Actually, we found the book available at a very attractive rate a long ago and was in our digital library for so long. Fortunately, I, from our team, got a chance to read it and share my unbiased views and reviews with you all.

Of course, you should not judge a book by its cover. But, one cannot deny the influence of a cover page in book purchase and/or reading decisions. We, more often than not, pick a book to take a look, if we find the cover page attractive, right? 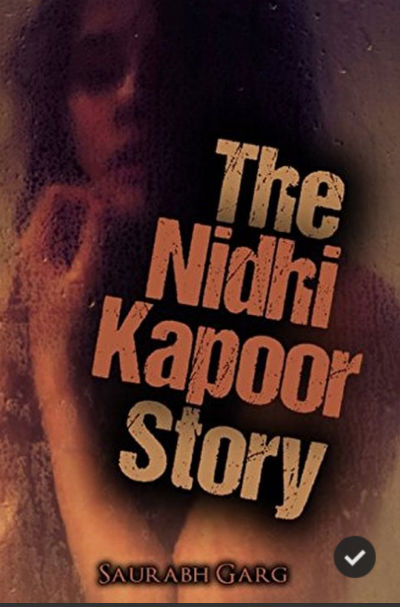 The cover page of The Nidhi Kapoor Story is moderately appealing as you can see. There are no cheerful colors on the cover page. You can see the face of the female protagonist from behind the glass window, and so it is not clear. These elements add to the “mystery” component of the book. The bloodstained lines in the letters of the title hint us that we might be exploring a murder related stuff which may have psychological aspects as well.

Overall, a moderately appealing cover, which could have been better.

Nidhi Kapoor, the daughter of yesteryear superstar Nishant Kapoor is an actress in Hindi Film industry. She is progressing in her career. But, the things start getting mysterious when her film set caught with fire, her pets at her home got murdered!

She started thinking that someone is behind her family.

Being an influential family, the things happened with Kapoors got the headlines in the newspaper in no time. Reporters are waiting for such news like bloodthirsty hounds. They are at no fault, of course. It is part of their job portfolio which they need to obey to get their respective salaries.

The things become so big that one of the best police officers with the best track records was put on this case. Is it a simple case of pets got murdered and fire on the film set? Or there are very deep skeletons hidden in the house? Or in the past of the yesteryear superstar Mr. Kapoor? If the story is more focused on the ACP and the female reporter accompanying him, then the name of the story “The Nidhi Kapoor Story” justified? How? Well, you need to read the book to know the answers. Over the course, you will meet Nishant Kapoor, Nidhi, Payal, Rujuta Singh, ACP Prakash Mohile, Tarana, and others.

For any murder mystery, if the story is revealed, or at least the key points are revealed, the thrill of reading gets affected for sure. Keeping this thought in the center, I have taken just a bird’s eye view of the plot, and you may complain that it contains even lesser information than the book blurbs. But, that has to be done to avoid as many spoilers as possible. I am presenting you my views about the book, in the following block by keeping that in mind, so some words/phrases may be masked, but still, read with the consent that some of the spoilers are inevitable.

The author is good at writing scenes. Be it the description of the Kapoor’s house from geographical or interior designing aspect; or be it a film set, or locales and life-style of Mumbai, the city of dreams, you will find them convincing. This is the first book by the author, but, that never occurs to your mind when you are reading it. And, that is a positive thing.

The author has the ability to get poetic when writing simple lines. Here is an example:

(Thinking about water)… As long as it is still, it makes for a very pleasant sight. But when it starts moving, it can cut through the thickest layers of the oldest rocks.

He creates a similar effect in emotional scenes as well, here is one quote from the book:

And then, she started to cry. In loud howls. She was so loud that it scared all signs of life around her. The birds and the stray animals scuttled away. The noise of traffic moving in the distance was drowned in her sobs. …

The people of Mumbai (or those who are familiar with the spirit of it) will find the following one-liner interesting:

The Vada Pao is the national snack of Mumbai.

There are some philosophical lines in the book that holds (sometimes hard) life lessons:

The lives of the public figures, who starved for fame at some point in their lives, often find it difficult to handle when it becomes their 24X7 duty. You get almost no personal moment when you can do anything you want in the way you want. This sad part is often missed by common-folks. The author has weaved it nicely in the book:

If you love reading crime thrillers and/or exploring murder-mysteries in the form of Movies/TV Shows, you will have deja vu feeling when reading the following lines:

And, even this one too:

Rujuta believed that killing someone was an irreversible process and one had no right to embark on something that one couldn’t undo.

This is the base thought behind not giving the death penalty to a criminal as far as possible. And, there is a beautiful movie made on the same theme, Kanoon (in 1960).

The other thing I like in the book is the “not-so-perfect” side of the characters. We love to define the characters in black and white. But, ultimately the real people are having (more than 50 🙂 ) shades of grey. There is no perfect hero, almost everyone has his/her own limitations. And it applies to everyone. Thus, the photojournalist and investigation officer (and his aide) from the police force, have their own share of limitations. It makes the character look more real. And, I like it that way. Here are some lines involving the investigative works in the book, from various aspects:

Let me share 3 blocks that are exploring three things in their ultimate/superlative form. It shall give you the idea of the quality of writing in the book.

…the things with the death is that it’s as essential to life and to the world as birth is. With death, the old, the frail, the non-useful makes place for the new.

This is the ultimate truth, and we know it. We know it since we started understanding life. But, we live like there will be no death. Probably that is called the “spirit” which gives us reason to live. But, we cannot run away from the truth. Can we?

Here is the block where the hatred is explored at the level you start developing empathy. The lines reveal the height of revenge and retribution in the psyche of a punisher.

I don’t care for her. If she’s gone, good. If she’s dead, even better. If she is suffering, it’s the best that I could ask for.

I have found the following line expressing the emotions using a very few words, effectively.

Even though they were with each other, the two women suddenly felt alone.

You will get a hint about the culprit around the middle segment of the book. But, then also, you will not lose interest in reading the story, that, I consider a positive aspect of the book.

So, the book has well-developed, realistic characters. It has the pace required for a thriller (with some bumps). It has some fantastic literary attributes. This book explores the dark side of the glittering world effectively.

But, at the same time, some of the lines are strictly for adult readers. It goes into graphical detail at many places, making the target audience of the book, limited to a certain age group. Of course, there are scopes of improvements too. But, talking about them will include spoilers, and, more importantly, it is the domain of the author, and he is free to decide.

A well-written crime thriller, strictly for mature readers. The book is good at many literary attributes but the scope of improvements is there. It is a dark thriller and is written for a target set of audience.

Caste Off: A Short Story By Jeffrey Archer | Book Review