There are hundreds or maybe thousands of books are published every year. And yet, we have a limited number of choices when it comes to Kids special books. It is rightly said that writing for “Children” is not a child’s job. It requires a lot of attention, detailing and you need to remain within bounds while exploring your imagination. That’s why there are a few books in the category remain loved by the reader. Here are some of the Kids special stuff we’ve talked about at ThinkerViews.

Adding to the list, we got a chance to connect with an Indian author, Jinal Shailesh Doshi. We’ve shared our unbiased review for her debut book “A Chest’s Tale“. Here is the quick link to the same:

It was around the same time Jinal was finishing her second book in the series – Tattooed Music. We have added this book to our kitty when it was available for free as a part of book promotions. Finally, from our team, I got a chance to read and share our unbiased views for the same.

A book should not be judged by its cover. Absolutely true. But, at the same time, you cannot ignore the influence of a book cover (both, in positive and negative ways) on purchase and/or reading decisions. For the kids special books, it is even more important to have an attractive book cover. 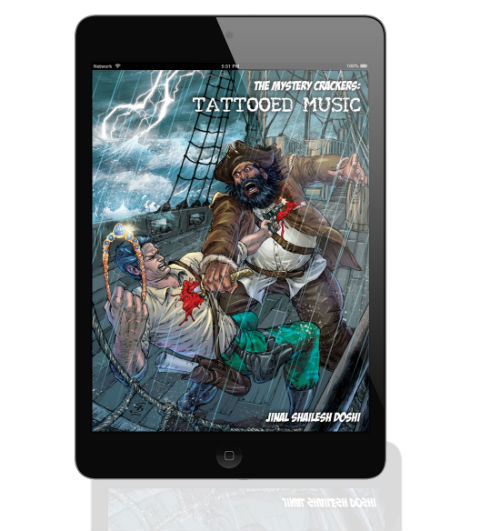 As you can see, the cover designer team from Holy Cow Entertainment (Vivek Goel, Gaurav Shrivastav, Prasad Patnaik) did a fantastic job here. The book cover is not only attractive but it explores the elements of the story quite effectively. The illustration of the pirate (who played an important part in the story) and a man getting stabbed are realistic yet non-violent. That is where the sheer brilliance of designers is more evident.

After solving the mysterious case of “A Chest’s Tale”, the group of Prashant Dattani (Prash), his twin brother Nishant Dattani (Nish), Hriday (Hri), Anjali Thakkar (Anju) and Sanjana Shah (Sanju) became famous in the small town Jhiljila. The town is in joyous and cheerful mode and people are busy celebrating.

But, how can everything remain cool and calm, always?

A mysterious ship is found abandoned in the sea near the city. The primary investigation of the ship shows that it belonged to a pirate in the past. But, how it came near the city, and then left abandoned? And, by whom? The investigation is going on. Inspector Golu and his team were busy resolving this mystery. His superior thought to add more resources to the investigation!

Rishabh Soni is the richest jeweller in Jhiljila. He is living with his beautiful wife Azmina in their lovely home. “Lovely” in many terms. The house has a fantastic exterior and interior, but more than that, they have had a love marriage :). And you can find a small statue of Emperor Prithviraj Chauhan and his lady love Empress Sanyogita wearing the beautiful Daulihaam necklace!

The rainy night with thundershowers has an unmissable impact on some people from the town.

But, what the mysterious ship has to do with any of these things (and people); and how all these things are interlinked? Well, you need to read the book to know the answers. On the due course, you meet Altf Mehmood and Rajshinsh Talwar also.

Jinal Doshi is a fantastic story writer, especially from the children’s literature point of view. The author exploring this genre has to be careful to make the stuff interesting but not using too much of jargon. The more simple your writing is, the more the reader connects with it.

The characters in the book are well explored and well developed. They grow up gradually and various shades of their persona keep unfolding throughout the story.

Another thing I like is the childishness of the kids. It makes the characters more realistic. They are not perfect ones. They have their limitations. They often hurry to come conclusions, but at the same time, they think again on the different paths, based on the latest input and don’t shy away when they need to apologize for their mistake. No ego, no superficial stuff. That’s how the kids are (or should be). And while exploring the characters Jinal took care of having the element of fun there. For example:

Nishant Datani chided with impatience, “Girls, if you are done with admiring the necklace and Hri if your thesis on Emperor Prithviraj Chauhan and his beloved Empress Sanyogita is over, shall we proceed?”

And, there are some detailed, serious discussions too, which you can read without getting bored. For example:

Legend has it that the real equivalent of this necklace – Daulihaam was actually made from a huge 70-carat blue diamond – Donah, which Emperor Prithviraj Chauhan gifted Empress Sanyogita just after their elopement as a token of their love. Empress Sanyogita ordered the diamond to be split into seven heart-shaped diamonds to be adorned in a magnificent gold choker. …

The author is good at exploring scenes, be it the description of Azmina Chalet, its garden, the town, the ship or something similar, you will enjoy the detailing. I like the way Prithviraj-Sanyogita love story is weaved in the book. If you read it carefully, you will find that both of them were referred with great admiration. In the same way in which the kids love to explore the mythology and historical stuff. In larger than the life manner. Both of them are referred to as Emperor and Empress respectively, throughout the book.

There are some segments where I found the author has explored beautiful scenes effectively without getting into too much of details. Here is an example:

The drizzling has ceased for a while, yet the lances of Jhiljila Town sparkled like emeralds in the morning sun.

The book has some places where you can think that better alternatives should have been used to make it more effective (i.e. wrong choice of words. For example:

The main door of the bungalow was slightly agar.

I think she is trying to mention that the door was – ajar -here.

But, these are the minor things which you may not even notice when reading the book. One major thing I found different in this book is the character of Inspector Golu. He is given the least footage in this installment.

The pace of the story remains good throughout and I have enjoyed reading it.

I am consciously ignoring the stuff which could contain spoilers, so there are some other aspects of the book which cannot be discussed. But, I think the segments from the book, quoted above, are sufficient to give you a fair idea of linguistic attributes and writing quality you can expect from the book.

And yes, the author already has a story in her mind, to move forward the series. She mentions that, another mystery The Ritzy Maartle is waiting for the kids :).

Do you like reading kids’ special books? Do you love books by Enid Blyton and others where you see the kids are involved in the adventure? In that case, this book is really a nice choice. You may find it quite pricey though, so you may love to go for it during a book promotion.

Definately, around 7.5 to 8 for a book in this category.

If you already have read the book do share your remarks and thoughts via comments below. Does this review help you in making your decision to buy or read the book? Do not forget to share this article with your friends over various social networks via Twitter, Facebook, and others. And yes, you may like to subscribe to our RSS feeds and follow us on various Social networks to get latest updates for the site to land right in your mail box.

Previous: The Vine of Desire by Chitra Banerjee Divakruni | Book Review
Next: A Necessary Evil by Abir Mukherjee | Book Review