The Vine of Desire by Chitra Banerjee Divakruni | Book Review

Browsing the works of Chitra Banerjee Divakaruni, we found this lesser-known book called The Vine of Desire. The book blurb reminded me of not only one of her short stories from the collection Arranged Marriage but also some other popular works and, so we decided to read it for Team Thinkerviews.

You can catch the reviews of her other books on this blog as well: 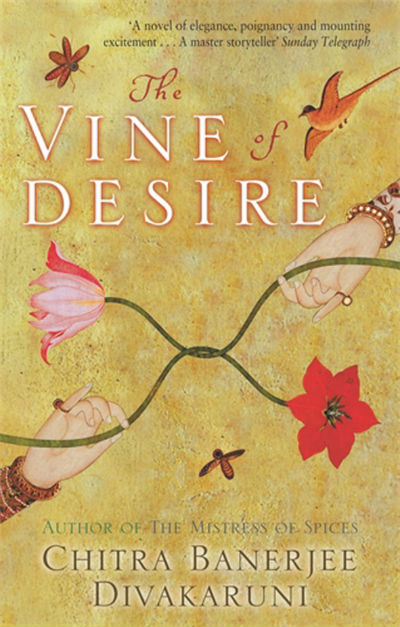 The Vine of Desire by Chitra Banerjee Divakruni | Book Cover

The cover page is designed as a fusion between well-known Indian painting styles and western fairy-tale setting of an enchanted forest, showing two beautiful female hands, each holding a different flower – A lotus and a Hibiscus, probably showing different personalities of the respective owners – the sweet love of a lotus blossom or the red-blooded desires of the hibiscus. It is very poignant and quite suited to the rambling nature of this tale and the intertwined destinies of its characters.

The book starts with some of my all-time favourite couplets from Shankaracharya:

Again the day, again the night
Dawn and dusk, winter, spring,
In the play of time, life ebbs away-
Only desire remains…

Again birth, again death
Again the dark journey through the womb
In this world of changes, nothing holds fast
Except the coiled vine of desire…

Here are the original lyrics for those who are interested in reading them:

The premise revolves around two women – Anju and Sudha, cousins who grew up in the same house and are as close to each other as sisters and best friends can be. But as it usually happens in life, those who grow up too close are pulled apart too far.

Beautiful Sudha married into a big, traditional household in Burdwan, while Anju married and moved to America. Although they lead very different lives now – separated by oceans and continents, by luck and chance, they both became pregnant more or less at the same time. The outcome of the pregnancy, however, change everything for the two.

Sudha was carrying a girl, and when her in-laws found out, they wanted her to abort the baby. Sudha walked out of the marriage and life as she knew it. She now has a little daughter called Dayita. Anju, on the other hand, had a miscarriage and lost her unborn son, Prem. She has since been battling with severe depression.

And so it makes sense for Sudha to come for a visit to America where the cousins can take stock of how their lives have gone topsy-turvy and support each other.

But sometimes we all tempt fate a bit too much. Anju’s husband has his own demons to face, especially with Sudha around – as his sleeping desires turn into a dreamy reality and all three of them bind each other with one more coil with every passing day, until it all unravels and all three of them drift apart to three separate lives.

As you may have also noticed, the story pretty much takes off from where we left Anjali and Arundhati‘s story in Arranged Marriage. It also very strongly reminded me of “Chokher Bali” by Rabindranath Tagore – the story of two friends whose lives and fates are twisted around one man.

Although the dreaminess of the tale was one of the strongest points for Mistress of Spices, this book is sort of a bridge where Chitra Banerjee Divakaruni’s writing moves from the enchanted world to the real world. Although it is not the full-blown fiction that one of her later books Oleander Girl becomes, it has the makings of it. She interweaves the observations from the events happening into the real world all around to come back to the daily lives of three young people living in a small house with a child.

Events happen, the characters do what is expected of them, at work, at university, at home. Go to parties, picnics, dates – only to come back like homing pigeons to twist into the webs of their own weavings. They try to repel their inner desires which are forbidden by social inhibitions, only to give in… But these desires are also substitutes for what the deeper unconscious mind actually wants… And substitutes, even when gained are not really good enough to mend what has permanently broken beyond repair and as Shankaracharya and Bhartruhari said – fulfillment of desire is only going to lead to desire…

Although it is a pleasant read, the premise is old and the strength of the book is not in the concept or the story, but in the conversations and dialogues and scene setting. The story itself feels a bit off if you come to this book from reading the author’s other works.

I liked the way the author uses stories from classic Hindi Movies to highlight the repeating nature of our lives and the nature of love, e.g., she talks about Umrao Jaan and then concludes with:

But is the real world that different? Who knows how many lovers are separated by the wills of others, or circumstance, or their own misunderstanding of duty? How many lives are ruined by chance? It is just that when it happens to you, you don’t tell anyone. There’s too much pain in it.

And since one of the central characters is struggling with her new identity as divorced, single mother, against all that goes in the upbringing of Indian women, and finds that freedom is dangerous:

I survived, but as I let go of one duty; one relationship – and found that all the others were attached to it like the knotted handkerchiefs a magician pulls from his hat. I felt them rush through my fingers until I was left holding nothing. Nothing – and no one – to stop me from doing whatever I wanted, whether it was good or evil.

Life is continually changing for Anju and Sudha not only on personal front but also outside. Although Anju has been in America a little longer than Sudha, it is still a strange land for both of them. They both feel the differences in what surrounds them – the experience of being foreign, there are some acute observations they make that highlight the differences between their home life and outdoor life. Even simple things like going to movies can be challenging:

Movies about Indian force you into elaborate explanations and exhausting denials – often to people you barely know –
No, we don’t eat monkey brains. Or bugs either. Yes, we do worship Kali, but, no, not usually by sacrificing beautiful virgins.
Yes, we do have street children. Yes, they really live hard lives. Yes, famine happens and then people starve. Yes, widows are often repressed… But there’s a lot more to India that what you’re seeing here… The questioners nod…

We can’t help but feel what these women feel. Their hopes, dreams, desires and frustrations, the overwhelming burden that life puts upon them and the courage with which they face their mistakes and try to forge a path ahead is admirable, whether you agree with their choices or not. In this story – just like real life, there are no happy endings:

You lean into grief, and you open your fingers. You let it support like the frail beauty of the turning, luminous earth…

A pleasant, poignant read if you like the work of Chitra Banerjee Divakaruni.