We’ve received a book named The Lost Arcanum by Navin Reuben Dawson sometime ago in exchange of honest and unbiased book review. Based on the books in the queue it took a remarkable time for its turn to come. And, the book is quite long so it took considerable time reading it. But, it was indeed a nice reading experience. 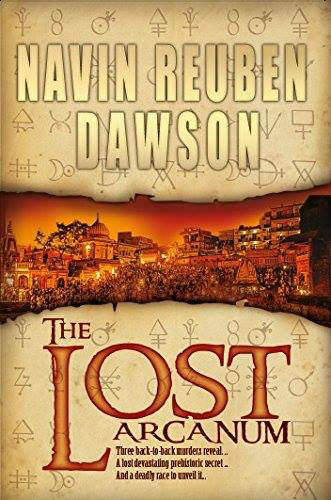 As the title suggests, the book is about a lost secret. So, it is a challenging job for the book cover designer to illustrate it. Because mystery has no face. So the illustrators went ahead and explored some of the ancient symbols in the large part of the book cover. Then, to make it more interesting they have shown some of the places referred in the book in the middle of them. I like the color scheme of the cover page.

No matter what people say about “never judging a book by its cover” (and I believe in it), no one can deny the influence of the cover page in reading and/or purchase decisions. In that way, the book cover passes the test.

On the verge of solving a series of gruesome murders, CBI officer Jake Stevens is pulled from the investigation. Intrigued and curious, Jake seeks answers, eventually stumbling upon a link between the murders and his long-dead father to an ancient secret—The Lost Arcanum. The link propels him on a deadly quest through a labyrinth of secrets, hidden history and unseen truths scattered across the mysterious landscape of India. With Taneez as unexpected company, Jake realizes there are those who are conspiring to ensure the secret remains buried. Ensnarled in a treacherous game with a professional killer and a covert organization, they find themselves on a deadly collision course with forces of vengeance, greed, and unspeakable power.

Will Jake and Taneez uncover the secret? Is the world ready for it?

Let us take a bird’s eye view of the story explored in the book.

It all starts in past where remarkable people of secret brotherhood are gathered to fulfil their duty, not only to preserve the ancient knowledge but keep it secure from going into wrong hands. The best way to do it is made replicas of the scripture and hand it over to 4 most trustworthy fellows who then flew far away with their possession to 4 different directions so no one but they know the whereabouts of the same.

The task was about to complete when shady characters attack. The grandmaster is able to finish all his tasks and almost all 4 of them ran away. Well, almost, because, one of them was curious to witness the events and he was the last to run away. Well, not before getting noticed!

Will he be able to keep the ancient secret safe?

Cut to the modern world, there comes Indian army, CBI and other such organizations in the picture. During an operation, Balbeer Singh came to know about something strange in the ice-clad land with freezing temperature. The layers are uncovered but the mystery is not fully solved. How can it be, till the protagonist come to action?!

Jack Stevens, a CBI officer, somehow got to know about something fishy going on. The personal life doesn’t stop when you are busy doing professional duties. He was advised by his lawyer who is more of a guardian to him to complete the process of fulfilling the last will bo George Stevens, his father.

Somehow the incidents lead him to the situation where he ultimately had to run on his own in the quest of something unknown yet very important! And, he meets Taneez during the quest.

What happens from the point forward is better to explore by reading the book.

I must say that the story is quite intriguing and the way it is explored in the book is really remarkable. In terms of mythological fiction thrillers, you can put this book to compete against any internationally remarkable work.

It is important for a reviewer to not to include any spoilers. From the author’s perspective, it is not less than a sin! If the key events and incidents around which the story is revolving, are exposed then the charm of reading the entire story is mashed up. Compare it with watching a suspense thriller movie knowing the suspense. In mentioning the brief plot (above) and sharing my unbiased views and reviews for the same, I will try to keep as many spoilers as possible, at the bay, but, please be warned that some of them are inevitable.

The author has really good command over the language and he is good at exploring the scenes. Here is an example:

A man bundled in a crimson hooded-cloak recalled the line tightening his arms around a metal chest and guardedly hastened across the twilight-kissed desert, towards a monastery. Even from a distance, its gigantic rock-cut dome rose imposingly against the dimming sky.

Here is one more example:

Deep, fiery eyes of Grand Master climbed the length of his body before they rose to meet his.

The book brings in some life lessons which are worth taking note of, like:

Hardships are part of everyone’s life and things that are gone will never come back. At least not in this life.

One who colludes with evil will eventually be destroyed at its hands.

One more thing I liked in the book is, the author tries to explore mythology by weaving it with Science. It is not all “Harry Potter” kind of the magic throughout the book (and there is a reason I am mentioning it, connected to the first book in the series); but the author tries to explore it from the most logical perspective possible. Here is a clue:

Although he was a hardcore science guy, the transmutation of precious metal from what had seemed worthless elements had turned his belief in science topsy-turvy, which further was strengthened by Taneez’s explanation of the Philosopher’s Stone.

At the same time, it must be said that the author has done remarkable research work and must have gone through many Indian mythological and spiritual books. The exploration of Srisailam temple or Ajanta Elora caves along with presenting historical references is not possible otherwise. I liked the way he infuses references to Shivkar Bapuji Talpade.

The author rightly says in the book that:

Knowledge is not what you learn within the four walls of any popular university. It is something you earn through your personal experiences and endeavours, like these great men here…

The author is good at conveying emotions, even if they are conflicting:

Staring at nothingness outside the window, Eileen teleported Jake to that fateful night, the same lamentable night his father George had left him and his mother never to return.

A penalty she imposed on him for a lifetime, for a sin he’d never committed.

While the book talks at length about Jatayu, Vimana Shashtra, Ganga and the reason why it is considered as one of the most significant rivers around the world quite effectively; it also talks about the mindset we see in the people today, who in order to present themselves as modern and logical, does some illogical things also.

What I really don’t understand is you urbanites. You educated people are trapped in two worlds. With one foot firm in the physical world bound to materialistic luxuries, you try to crease other foot in the spiritual world.

I like the following passage from the book as well.

They were never defeated by difficulty or hard work. They persistently devoted themselves, spending whole nights at the mouth of the fury furnace, putting in many laborious hours to harvest the fruit of their hard work.

The book has many characters including Lucifer, Grand Master, Jake Stevens, George Stevens, Balbeer Singh (Director), Riya, Rajat Singh, Ishita, Ravi Raj, Eileen, Jaswanth Sinha, Mr. Melkundi, Taneez, … The story, of course, revolves mainly around Jack who is the protagonist. It is his quest to uncover the mystery and more important know more about him and his father. It is not easy to manage so many characters without neglecting some of them, the author, however, seems in full control.

The book is quite lengthy and it can possibly go wrong with the same from two perspectives, price and book size. Most of the people these days prefer about around 200 pages, based on their attention span. Of course, there are curious readers who want to explore good books regardless of their size. Possibly, the author is going the self-publishing way and thus may find it difficult to divide the story into two books, or he might be thinking of telling the story in one shot.

The book has its own share of some proofreading mistakes and they could have been looked after. Here are some examples:

Page 112:
But be informed that the truth u seek is not that easy to be found…

A glossary at the end of the book could have made it even more valuable. The author, however, shares his logical reasons about picking some of the stuff and distinguishes clearly about how much is taken from the reality and how much is fiction; at the nd of the book. That is another positive attribute of the book.

So, overall a nice thriller. If you love mythology mixed with Sci-Fi and thriller, this book will definitely be a good choice. The book-length and price are the only factors you may want to consider.