Posted by: Editor January 31, 2019 in Books, English Leave a comment

Ankit Fadia‘s name became well-known with his publication of “An Unofficial Guide to Ethical Hacking” at a very young age. Since then his reputation and career in the world of cyber security and hacking have had a lot of hits and misses. He has published a number of books and videos on hacking and protection against hacking and is a popular figure on the internet when you are looking for tips to protect your computer or mobile phones.

Recently however we noticed he has ventured into fiction writing with his first book released by Westland Publication in 2018 with a title, The Casino Job. We snapped the kindle edition of the book and here are my thoughts on the book on behalf of Team Thinkerviews.

The cover page shows an ace of hearts showing the name of the book dotted with winking casino lights and a cruise ship sailing underneath. The A in the author’s name is given a visual emphasis and twist. 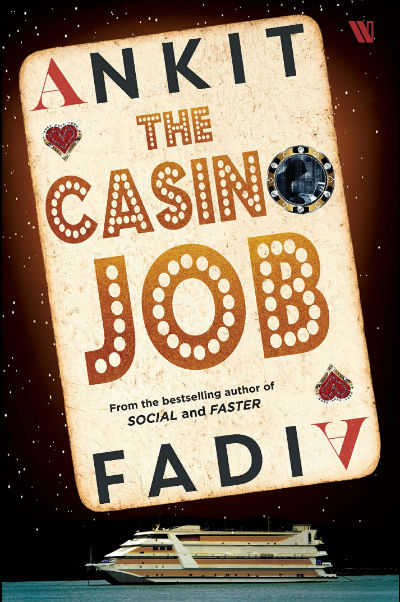 Although the cover page captures the whole premise of the story neatly, it appears a bit dull and could have used some bright, cheerful colours as this is a story of young students looking for fun.

We meet Rohan, Hardik and Mallika as they start advanced study at a prestigious business school in Delhi. Rohan is a typical city guy, good looking, smart, fun-loving party goer with surprisingly good computer skills and some knowledge of hacking. Hardik is a hard-working fellow from Bhavnagar for whom this business school is the biggest chance to a good career and financial safety for his family. Hardik also is marvelous at Teen Patti. The glamour quotient is provided by Mallika who is super-model beautiful with brains to bring her to a top business school and is also a skilled Bharatnatyam dancer.

When Hardik wins an unexpected amount of money at Teen Patti in a Diwali Party at Rohan’s cousin’s house, the three friends decide to fly to Goa to enjoy. However, gambling and greed of winning is just starting to work on them. So on the last day of the trip, Rohan and Hardik decide to go on a casino ship to win a jackpot.

You might know that since gambling is prohibited by law in India, the casino ships at places like Goa stay outside Indian waters. In the book, this is ‘El Dorado’, run by Israeli mafia. When Hardik and Rohan arrive at ‘El Dorado’, they feel like they have entered a Hollywood movie. The glamour, the money, wine, women – it is all here. Soon Hardik shows his magic touch at Teen Patti table and wins almost ten lakh rupees.

But if every punter won, how would a casino make profit? Rohan and Hardik are called in by the head of security Munjal, who asks them to leave with the winnings. Both friends are on a high induced by winning though and do not take his advice.
The next thing they know, they are lying at an unknown Goa beach in muddy waters, with everything including their wallets and mobile phones gone.

They somehow manage to reach back their hotel and get their lives back together. Although Rohan finds it impossible to forget this experience and decides to take revenge on the casino. He seeks help on the dark web.
In spite of everyone advising them not to go back, Rohan, Hardik and Mallika decide to go back to ‘El Dorado’ and win what they have lost?

Ankit Fadia has written a fair bit before, so the story flows smoothly with no exaggerated descriptions or unnecessary drama. The first few chapters could happen in any college as new students interact with each other and form friendships. The references to computer hacking and dark internet have some technical bits but none of it is so technical that normal readers feel bogged down.

Reading this book is like watching a heist film, with some Bollywood masala. It has all the right bits – the setting of Delhi and Goa, Israeli mafia, beautiful women, lots of alcohol, intelligent but rash heroes who don’t take advice easily, the miraculous saviors who appear to sort out the problems just in time and save the day. There are some swear words and nude scenes, so not recommended for very young readers.

When I read the blurb for ‘The Casino Job’, I thought it would be like ‘21’, the Hollywood film based on ‘Bringing the house down’ by Ben Mezrich, wherein brilliant MIT students cheat at Blackjack in Las Vegas casinos.

While the premise is very similar, here it is only Hardik, who actually happens to be a good player and good reader of other players. While Mallika is there to communicate to him about other people’s cards in sign language, it is mostly superficial and more than what he needs. But this book also shows how very intelligent people with bright future ahead of them can fall victims to greed for money and forget about legalities and dangers of what they are doing.

Those familiar to Goa will identify with Ankit’s descriptions of Baga Beach, South Goa, Dabolim airport and dancing and casino cruises on river Mandovi. We enjoyed the rapid flow of the story and catchy dialogues with one-liners like below examples:

There is no fanatic more fanatical than a new convert

Every single day somewhere, some moron sees a movie and thinks that he can rob a casino.

You think this a James Bond movie? I am not about to give a monologue here.

With 25 chapters and 220 pages, this book is a very quick read – approx… 4 hours. And so we found it is a bit on the expensive side with the paperback priced at 220 and even the Kindle edition at 171 Rupees.

It is a good entertainer and would be worth buying during a book deal though when you are looking for something fun to read in your travels.

On a Drive with Life! By Ankit Kumar | Book Reviews