Dr. Vineet Aggarwal studied science and pursued his career in the medical field. But, the stories he heard from elders when growing up always kept him fascinated for literature, especially mythology. Eventually, he decided to rewrite this mythology in his own words and from his own perspective. His first book was on Vishwamitra, the legendary Brahmarshi who born to a Kshatriya. You can read our unbiased views and reviews for the same at:
Vishwamitra : The Man Who Dared to Challenge the Gods – Book Reviews

Continuing his quest to explore mythology in a way that it can appeal the current generation and infusing his scientific point of view into the content, he decided to take a look at the life of Raam, the son of Yamadagni (aka Jamadagni) and Renuka, who is better known as Parshuraam, due to his possession of his legendary primary weapon.

On a side note, this book review was initially planned to publish some day later in future, but then, what could have been a better day than the “Parshuraam Jayanti” (the birthday of Parshuraam) to publish it?

Let us take a look at this book, The Legend of Parshuraam. 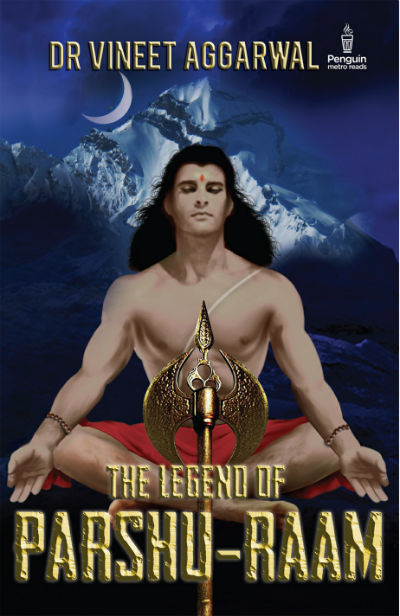 The Legend of Parshuraam by Dr Vineet Aggarwal – Cover Page

A clean shaven, well built sage performing his Tapasya with the snow clad mountains in the background and his legendary weapon Parshu (in different shape than most famous) in front and the moon above his face will undoubtedly remind you of Lord Shiva. Parshuraam belongs to the lineage of Brahma, considered as an Avatar of Vishu and a form of Shiva, so actually representing the whole divine trinity. The cover page, in this way actually is effective, however the clean-shaven face of the sage, somehow doesn’t go in sync with the rest of the stuff, according to me. Overall, a cover page which is impressive and contain many symbols but could have been better.

The book starts with the references given in Vishwamitra : The Man Who Dared to Challenge the Gods by Dr. Vineet Aggarwal. It is worth to note that the book is complete in itself, so if you’ve not read that book yet, you can still enjoy this book without any issues.

With the events that lead Ruchik to again into isolation and doing ultimate worship to the God, Satyavati got the responsibility to raise the kids Vishwarath (her brother) and Yagadagni (her son). Eventually Vishwarath became the warrior he was trained to be and Yamadagni was transformed into a learned man. Time passed by and Vishwarath had gone to abode as his destiny took him and he became Brahmarshi Vishwamitra.

Yamadagni, or Yama, as he was fondly called, was married to equally intelligent Renuka.

Prince Arjun, a brave warrior from Nabhivarsh is destined to became the first emperor of the entire Nabhivarsh and beyond. His rise was result of his sole intentions of spreading the life of Dharma to the entire civilization. Of course, for “a way of living” to became the reality for every human, the other “ways of living” has to decline. Obviously it leads to clashes between civilizations and various tribes.

Arjun’s marriage was a calculated move planned by his parents in order to make the Nabhivarsh a safe place for noble humans who follow the path of Dharma. This action eventually leads to the consequences which made him invincible warrior. At the same the seeds of the adverse events are rooted as well.

How and Why? What role, Ravan, the rising king of Asur tribe, had to play in the rise and fall of various characters from that time? How Raam, the son of Yama and Renuka became Parshuraam and how he did something unprecedented and not repeated till date? Well, you need to read the book in order to get the answers to all these and many more questions.

Do you love reading mythology retold? If the answer is yes, then you will find this book a delight to read, without a doubt.

All the characters of this book are given enough space and time to grow into themselves. The book contains a lot more than the incidents happened in Parshuraam’s life. From the roots of the legend till his enormous act to retire to isolation are all explored in linear yet interesting manner.

In most of the stories, we see the rise of the protagonist explored quite effectively. We cannot say the same of the antagonist though. This book, in that sense has devoted enough time to the character of Arjun. Various shades of his character which was white and then transformed into black by passing through many shades of grey are elaborated nicely.

The way all the characters of this book follows their path of Karma and Dharma will fascinate you. There is no discrimination between the positive and the negative characters in terms of exploration. Of course, the characters of Ruchik, Satyavati, Yamadagni, Renuka and Raam are the strongest of them along with that of Ravan, Karkotak and others. Telling more about all the characters will lead to spoilers which I don’t want.

The most talked incident of Parshuraam’s life could have been explored in better and detailed way, however it is written in thrilling way.

The author is good at exploring war scenes and some of the scenes will don’t leave your memory even after you complete reading the book. Same we can say about the way the nature is explored. Author belongs to the background of science and he firmly believes that the Indian mythology is not a mere work of fiction. He tries infusing science at various places to explain the things convincingly. And the mixture is very smooth.

Here are some of the interesting lines from the book which talks about relationships, history, dharma, politics, philosophy and other stuff in an interesting manner.

… the Supreme Lord is above all relationships. But, He can present Himself in any form for His devotees.

Your father ha renounced the world of men and taken sanyas very early but he returned to honour his unfulfilled commitments.Taking cue from his life, I wish for you to follow the path of Karma Yog since you have a family to take care of.

I have blessed him with ability to defeat anyone who is not following dharma, but if he encountered someone who is following all the prescribed rules and still decides to attack, he will certainly be defeated.

Suddenly the telltale cries of a baby rent the air and the men’s sombre faces broke into a grin.

… he realized, how important family was especially in these deserted parts where nature ruled supreme.

Humans had managed to modify their environment to the extent that they could survive in almost any corner of the world but without the benefit of science and technological advances, man was nothing but a weak mammal poorly equipped to survive his surroundings.

To hide one clandestine act, you sometime have to perform a hundred more…

In every country or society, there exists a few who are unhappy with the way things are…

No matter how far one travelled, one had to come back home at the end of the journey.

Well, what is history but the variation of facts by the victorious and the self-sympathizing delusions of the defeated?

… I do not want this chronicle to be written by the court scribes who tend to exaggerate the achievements of the past and downplay its shortcomings. I want it to be a historically accurate manuscript from which future generations canlearn their due history.

In addition, you will like to read the following in the book:

Overall, a fantastically retold mythological tale with logical approach. The book has good literary attributes and strong characters. The hidden message of the book conveys the importance of destiny and actions and how one needs to walk on his/her own, on the path of karma; quite effectively.

Purchase Links:
Over to you: