Children’s literature is one of our favourite genres here at Team Thinkerviews and so we are continuously looking for new books in this arena. One of the latest books we have been waiting for is The Christmas Pig by J K Rowling.

The book was published in October, 2021 in time to be a great Christmas present for 2021, but it has taken us some time to read this and share our review on it. 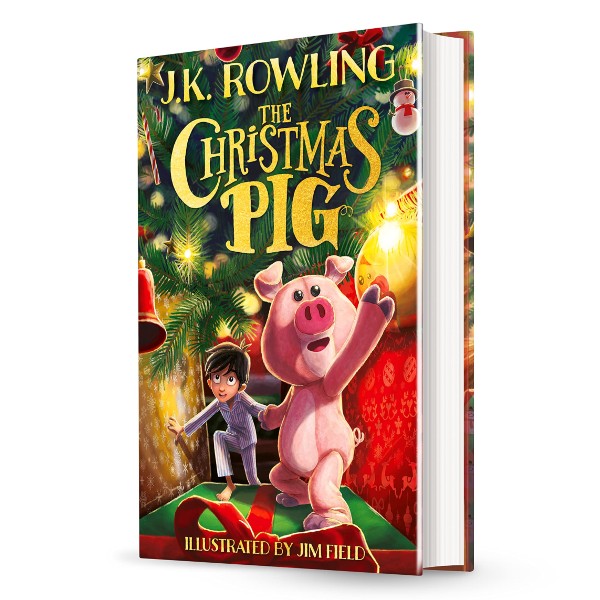 Being a book filled with Christmas magic, the book cover also sparkles with colour and adventure as we see a young boy holding hands with his cuddly, toy pig and climbing a mountain of wrapped presents. A decorated Christmas tree lights up the background making it a joyous and cheerful gateway to the fictional world within…

The first part of the book introduces us to a young boy called Jack and his most beloved toy in the whole world – a cuddly pig that Jack calls DP. DP smells of home and love to Jack and is his comforting friend as Jack’s life goes through upheaval as his parents divorce. Jack and his mother move closer to His mum’s parents and Jack has to go to a new school and life changes around him again.

He meets an elder student called Holly at school who is kind to Jack. But when Jack’s mother and Holly’s father meet each other and eventually get married, the family dynamics between Jack and Holly change drastically.

As their first Christmas approaches, Holly is feeling angry and miserable and their altercations lead to a  terrible fight in a moving car. Holly throws DP out of the car and destroys the last threads of familiar life as Jack knows it. Jack is angry and devastated and when his grandparents replace DP with a Christmas Pig, Jack tries to break the toy into pieces by ripping its head off.

As the exhausted boy finally falls asleep, the world around him comes alive. Jack is told a fantastic tale by the Christmas Pig. Tonight, on Christmas Eve, on the night of lost causes and miracles, Jack could travel to the land of the lost and recover his treasured DP. This has never been attempted before, but in spite of the warnings against it, Jack decides to take on the journey.

And so we travel to the world of the lost where the Loser reigns over the world of the Mislaid, the Disposable, the village of Bother-it’s-gone, the Wastes of the unlamented, the City of the missed and the Island of the Beloved. Holding hands with each other Jack and the Christmas Pig make their way through this perilous world and meet lots of interesting characters and some dangerous ones, too.

But when Jack finds his precious DP, he also finds that this is not the end of his journey. That he must now face the Loser and he may never return to his home or his family….

How will the journey and the adventure end?

Now, the first thing to remember is that while it is strange to us, for children growing up in the Western World, pigs can be pets and very popular cuddly toys. So, the title may be a bit strange for Indian readers, but it will be very appealing to young children overseas. And if you are passing this book by because of the title, stop and give it a try 🙂

The Christmas Pig has been long time in writing and it is great for the Rowling fans to finally enjoy another children’s adventure tale from the author who did so well with her Harry Potter series.

J K Rowling does not disappoint on the imagination front as she constructs the land of the lost with elements from everyday life twined into its threads to make a world that is familiar and exciting at the same time. She makes a world for every day Things where their essence lives on, even when they can be forgotten or thrown away from their owners whose fancy sometimes lasts only for a few minutes or a season.

Being used and absorbing human feelings wakes Things up.

Alivening is what changes things from fabric and beans and fluff, or metal and wood and plastic, into…something more. Alivening is when we truly understand what we were made to do.

Illustrated by Jim Field, the book is a delightful read for all young children. The illustrations bring not only Jack and his pig to life, but also all the myriad places, we travel together in this world. The book is filled with likeable characters including Jack and his toy pigs, the loving members of his family who try to keep him well and safe, the fantastic characters he meets in the land of the lost like the Blue Bunny, the broken Angel, the compass and the poem.

And while the narrative is enjoyable, there is also quite a few moral lessons in the book as it shows the children the futility of pretences or disadvantages of bad habits or things that should be lost – like greed.

There are bits like the poem below, that explain the real value of Things:

He never understood it’s not your cost

That matters in the kingdom of the Lost,

But whether you once touched a human heart,

And how it hurt when you had to part

There are also quite a few funny bits, for example, when the compass tries to explain how he likes to make up stories and invent mottos. But at heart, I think the book tries to teach the young and old readers, how we live with abundance of everything and sometimes we just throw away things without a care in the world. If you didn’t have so many possessions, would you care more for a few you did have? Does a child need a new toy with every happy meal or a piece of chocolate, or just a few which he can love and treasure? And also that no matter how much we love something, sometimes it does get lost, and all we can do is love the memories of it…

Losing is part of living. But some of us live even though we’re lost. That’s what love does.

In summary, this is a heart-warming adventure for young readers who miss their much loved toys and could use some magic in their dreams.