The world of books is filled with unending number of gems that require serious readers who not only pick up the books in hope of an entertaining story, but also look at literature that is the reflection of our fragmented lives pieced together to form the kaleidoscope of the times and places we live in. Author Raj Kamal Jha is well known for writing evocative books starting with debut novel The Blue Bedspread in 2007. This was followed by If you are Afraid of Heights and Fireproof, and in 2015 with a book based in the megacity of Delhi called She will build him a City.

We have enjoyed reading these works and I now have the opportunity to share my views on this book here at Thinkerviews, where we are always looking for books that provide a good balance with our exploration of other popular genres. Some of the other books in this vein we have reviewed are: 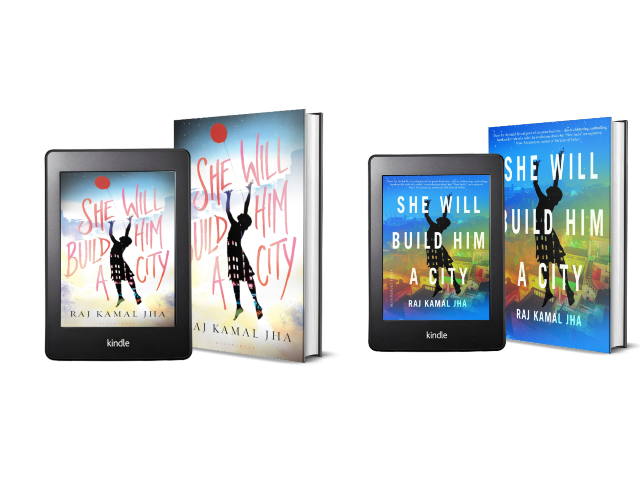 As you can see various versions of the book have different cover pages. The theme is carried forward, though.

The gateway to the world of this city is captured in a bright, cheerful cover page which invites readers in. The sunny blue and white o the background shows some building outlines in the background and a central image of a young girl reaching for a red balloon flying away in the sky. The silhouette of this girl is lit up with windows of an apartment complex at night.

While looking at this cover page at first glance, you would hardly imagine what the ‘red balloon girl’ comes to represent inside the book. But it definitely is a good eye-catcher to draw attention of the book browsers.

The book introduces us to Man, Woman and Child through three different threads of stories as the woman welcomes her estranged daughter home, the man contemplates getting away with murder and a newborn boy is left on the doors of an orphanage on the hottest night in remembered history of the New City.

As the stories progress, we learn of the Woman’s life – how she came to the city married to a man she loved, how he encouraged her to pursue a teaching job, how they made a loving home for their daughter, how the mother and daughter coped with untimely loss of the husband and the father and grew estranged to each other until the daughter left home to live with a man she loved. Now the daughter has come back, battered and bruised, mourning the loss of a child herself and yet there is a barrier between them that does not seem to be weakening or disappearing.

The Child is discovered and cared for by variety of kind strangers including the staff at the orphanage, his night nurse, a black and white dog, the poor and uncared humanity who lives on the streets of this city and then by a surreal presence living in a cineplex which finds him a home between movies, movie screens and the theatre.

The Man is going through a heightened state of anxiety and mental awareness where neither he nor the readers are sure of the reality of the events in his story. He appears to be rich, lives in an apartment worth crore of rupees, has friends living all over the world – USA, Singapore and Europe. But he is driven by a strange desire to clean everything around him including defacing all things poor and ugly that surrounds his existence, exploiting people beneath him, emulating existence of childhood friends living in far away places and wondering all the time what crimes he is committing.

How are these threads connected then and how such different lives interact with each other? And where is the Red Balloon Girl in all this?

As you can see above, this is not a straightforward story but a tapestry of interwoven threads of lives that could be anyone in the megacity of Delhi and its twenty million souls forced to live in such proximity of one another that there is no getting away from its oppressive nature. Whether you are rich and living in rich neighborhoods or the slums in poorest areas of the New City, your lives are intersecting with each other all the time. For the Apartment Complexes of rich are tended by laborer living in the slums and their cars are driven by poor souls looking for a few thousand rupees that can be sent home.

If you are in the newly rich, upper middle class, you depend upon the women who cook and clean your homes, young girls – children themselves – looking after your young ones, marveling at the shiny novelties of the playpen and toy stores they are not allowed to enter. While the proud proclamation of ‘We are building a new India’ welcomes visitors landing at the airport and being promised the biggest retail heaven existing in the Mall, there are thousands of people who work at keeping these places clean and free of trash, some of them remembering the long-lost fields of wheat that covered the same pieces of earth.

The fact remains that if you put twenty million people in close proximity, most of them under the age of thirty, still alive with dreams, ambitions and aspirations to achieve lifestyle they see advertised all around them, then greed and desperations wins over dignity and compassion more often than not.

While we mostly see lives of three characters, they also show us the casual brutality with which crimes are committed in this megacity that no one seems to notice or demand justice for.

The lyrical prose of the novel is in stark contrast with the darkness of this world and its characters, but it does help with the sur-realness of it. As the timelines blur and the identities of the characters overlap and intersect, as the events take place in a plane somewhere around us but not quite here, the readers are also presented with the strong sense of historical repetition of the events, whether it is the evocation of Dickens at the start of the book or the way the Metro tracks are built over the historical monuments of the old world that housed migrating people of their own times. Some of my favourite parts of the books is when the author weaves in the thoughts from works of three past Nobel laureates of literature and how their work appeals to the Woman. For example, from Patrick White’s works:

She thought of the narrowness of the limits within which a human soul may speak and be understood by its nearest mental kin, of how soon it reaches that solitary land of the individual experience, in which no fellow footfall is ever heard.

The book may not be an entertaining easy to read story, but it sure is a mirror of how we are shaping the modern India and how much we are at risk of losing compassion for those around us who do not have the same luck as us. Or tolerance and understanding for ways of lives which are lived on a different trajectory from the one on which we are. Society is not built by climbing over the shoulders of ones around us but by being part of the whole One. However, this seems to be only a dream compared to the realities shown in the book, but I think Opaar must still be possible even if we have to look for it in remote pockets.

Previous: Startup Lessons from Paytm By Ashish B. | Book Review
Next: Illuminae by Amie Kaufman and Jay Kristoff | Book review