Shall We Tango, Charlie? By Chetna Lumb Bedi | Book Review

The International Women’s Day has just gone by and we all heard about the initiatives and advances being made in creating a world where equal opportunities are available to all irrespective of their gender. Armed Forces are generally made up of men but in last couple of decades, women have been making their mark in this area too, and the roles available to them are also getting more diverse by the day. I remember watching a footage of women soldiers patrolling our border at Rajasthan in recent newscasts.

In our journey of exploring new books and authors, Team Thinkerviews came across a book by author Chetna Lumb Bedi called Shall We Tango Charlie? Now at first impression this title brings to mind a type of dance as well as a movie – Tango Charlie.

But, upon reading the blurb and the introduction it is clear that it is a love story set in the background of Indian Armed Forces. We were intrigued by the premise and decided to dive into it. We received a copy of this book from Fingerprint Publication and on behalf of Team Thinkerviews, I read this book and share my views on it. 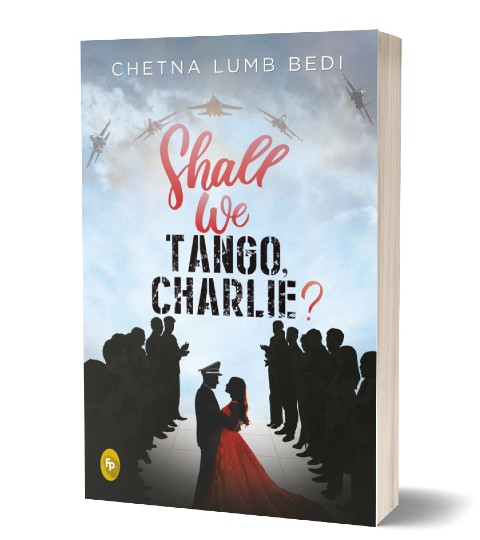 Shall We Tango, Charlie? By Chetna Lumb Bedi | Book Cover

The cover page – the entry to the world of this book – shows a grey-blue sky peppered with fighter planes. In the forefront there is a scene of a party with spectators clapping to a couple dancing in the middle. The man is wearing his uniform as evident by his cap and the woman is wearing a red dress.

It is a moderately attractive cover page, but it is quite suited to the story within the book. The significance of the red dress is revealed to the readers through the story 😉

We meet Corporal Ahana Lamba as she breaks up a fight between a young woman cadet and her colleagues. Soon enough, we find out that Ahana is quite famous for her unusual track record and we start the journey with her as she takes us back to her first day at IAF.
On her very first day, she calls out a giant of a man for teasing her and takes him down in a hand-to-hand combat. As she makes her way to the Garud commando trainee selection, she meets Dana Dixit. While Ahana has no one left, Dana comes from a family with a long history of serving in the armed forces.

The grueling selection process ends and Ahana and Dana become fast friends as they arrive for their first training module at the BTI near Belgaum. Here they have Commander Matthews as in-charge and soon the girls develop a bond with other trainees as they make mischief and pull some pranks. At the end of their training module here, Ahana is in some serious trouble, but she pulls through.

We also learn about Ahana’s troubled upbringing and why she turned to learning self-defense at young age as well as Dana’s desires to make her family proud.

The next phase takes them to Hindon Air Base. Here, even before the training starts, Ahana and Dana unknowingly prank Commander Randhawa, who is going to control their fate here. As the training goes ahead, Commander Randhawa slowly comes to admire Ahana’s grit and endurance and at end of the training, offers Ahana a chance to do additional training modules.

Although this means that rest of her batch, including Dana, will graduate without her, Ahana accepts it. The reason is a handsome, young IAF officer that resembles her dream hero – Maverick from movie Top Gun. So this Charlie follows him through. Although, she is never able to talk to him.

But her life changes forever during her time in Srinagar. Here, she meets a young man called Aamir, his mother and his fiancée Myriam. Soon, this family becomes Ahana’s family, too.
And when Aamir is charged for aiding terrorists, Ahana has a hard choice to make – Armed Forces or Aamir and his family. Will she walk away from all her training and an opportunity to serve her country?

As you can see above, the story features strong women who are working extremely hard to pave way for themselves in the arena that demands not only physical fitness but also mental grit and sacrificing their personal lives. The author has done a good job of walking us through various steps of their trainings as they move from location to location – whether it is Karnataka or Delhi, Kashmir or Mizoram. The book tells us a lot about how diverse and advanced warfare training can be, how the hierarchy and discipline is enforced within armed forces and the prejudices and the class divide between the officers and the common soldiers.

The movie buffs who love ‘Top Gun’ would also love how Dana and Ahana quote the dialogues from the movie and how Ahana becomes Charlie. It is understandable how the glamour of flying at supersonic speeds can captivate the young minds who love living on edge. The references to the movie add to the romantic angle of the book.

I like the way Ahana’s character is self-motivated about learning self-defense and being physically fit. This can be attributed slightly to her upbringing in Western World where physical fitness and sports are promoted through schools as well as society. But the increasing violence against women in India is also a signal that we need to encourage our girls to learn to defend themselves.

Ahana also has seen domestic abuse at home and hence grown up with a mindset where she doesn’t want to be subservient. All this makes her a good soldier, but it is her impulsive nature that’s a hindrance. Working in armed forces demands a lot more from people:

Being in the armed forces is not just about courage, it’s about self-sacrifice. It’s about letting go of everything that matters to you if it comes in the way of your service to your country.

You are a good soldier. You fight with all your heart. You train with all your might. But you don’ think things through. You don’t consider the consequences of your actions. A soldier needs to be vigilant at all times.

She has grown up with no firm beliefs in anyone but herself and so she also forges the bond of family in an unconventional way:

I was a corrupt believer. I didn’t care if there was a God or not. I never felt the need to settle that argument. However, anytime I truly desired for something, I crossed my fingers in prayer. All I wanted was to get my wish across.

Family isn’t an obligatory relationship that you’re born with. It’s made up of the people in your life who want you in theirs, people who accept you for who are are, who would do anything to see you smile, and who love you and are there for you no matter what.

She is spunky and by no means an ideal student. She is always making mischiefs and pulling pranks:

He caught me smuggling a carton of smokes during the High Altitude Mountain Warfare Commando course at the Parvat Ghatak School in Tawang, Arunachal Pradesh. He pushed me into the ocean as I screamed at the top of my lungs, reluctant to make the dive during the sub-surface infiltration drill at the Basic Combat Divers course at the Indian Navy’s Dive School in Cochin, Kerala. He reprimanded me for pranking other cadets with middle-of-the-night fake firing using artillery simulators at the school of Artillery in Nashik, Maharashtra. He foiled my plans to share cotton balls dipped in chocolate as Diwali treats with the other officers at the Indian Special Forces Training School in Nahan, Himachal Pradesh.

But she also has the courage to make difficult choices and stick by them. Through her mistakes she discovers herself. While she excelled in the training, it was still physical skills for her. Only though adversity she discovers the true soldier that lies within her and also the true love of her life:

Nothing is easy and you are bound to fail or fall at times, but moving on helps not just you, but the people around you as well.

Being away from him was a thorn to my heart, penetrating deeper with each passing moment, exerting enough pressure to leave me with constant pain, taking what was once my inner light and replacing it with darkness that overshadowed each moment, killing me bit-by-bit until I was but a carcass of memories.

Even though it is predominantly Ahana’s story, the author also gives us other memorable characters including Dana, Aunt Shashi, Commander Randhawa and Maverick, Aamir, Khaala and Myriam. Through these characters, the author shares with us some really interesting observations:

There’s wisdom in asking, and there’s arrogance in telling.

Most people are either running from something or running to something.

I guess that’s the biggest risk we face in life. Everyone is running at an extreme pace towards the idea to win at all costs. Failure is not an option, so lets just plough through. But if your own pace starts to blur everyone and everything else around you, would that be considered a win? It would only be a matter of time until something brings you hurtling down.

Although there is a central message here about the capability of women and their achieving new frontiers successfully, the author doesn’t make her characters perfect. They are all human and they have the same problems and faults as their counterparts. Sometimes, these women take on too much in an attempt to prove themselves. But these things are bound to happen when something new is taking place.

The book is generally well-written. The only questionable part is how easily Ahana can communicate with Khaala. One has to assume that they had a language in common 😊

All in all, a spunky love story that sees a courageous young woman discover herself, her passions and her family…

No Matter What By Rohit Dawesar | Book Review

Previous: Russia From Above | Series review
Next: No Matter What By Rohit Dawesar | Book Review