Home / Books / Shahjahanabad: The City and Its People | A Chapter From Red Fort By Debasish Das

Shahjahanabad: The City and Its People | A Chapter From Red Fort By Debasish Das

Debasish Das, a scholar in history, came up with a book named Red Fort: Remembering the Magnificent Mughals. He has documented what he found about the iconic “Red Fort” during his years of studying history in the form of this book.

The preface of the book is written by Prof. Harbans Mukhia, a professor of history in Pt. Jawaharlal Nehru University. Harbans Mukhia is a celebrated author too. Getting the book preface written by him adds to the authenticity of the content in the book. 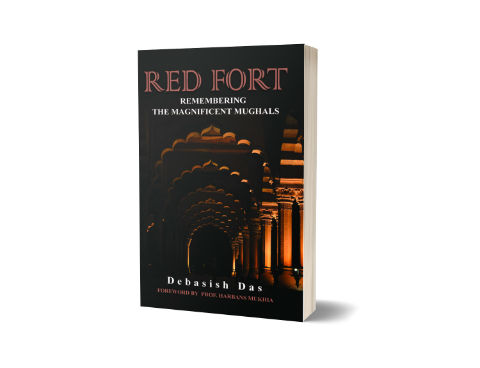 We are glad that Debasish Das allowed us to let us share a chapter from the book :). It is indeed a proud moment for us as well. Here I am sharing with you glimpses of the chapter “Shahjahanabad: The City and Its People” from this book with a vision that it will provide you a sneak peek into the content of the book and assist you in making a purchase and/or reading decision.

Shahjahanabad: The City and Its People

Shahjahanabad was built in the ancient city of Delhi, which was a capital of Hindu kings from 1000-1200 A.D., and of Muslim sultans from 1200-1500 A.D. Moreover, it already had an aura of spirituality, with shrines of Sufi saints Nizamuddin Auliya and Khwaja Bakhtiyar Kaki making it a religious pilgrimage. Planning of a new capital in such a historical and spiritual city, that too by Shahjahan the master-builder Emperor, demanded something out of the ordinary. Its Persian and Hindu architects and designers amalgamated the buildings and physical layout of the new Mughal capital with an underlying concept of “centre of the world”, drawing from both Sufi text of Rasail and the Hindu Vastu Sastra. Stephen P. Blake explains the city’s semi-elliptical design was based upon the ancient Hindu Manasara Shilpa Shastra that proposed a city-scape fronting a river as that resembling a bow or a karmuka.

Well-planned streets in the city were laid out to resemble different parts of the bow. The north-south street from Akbarabadi Gate (now called the Delhi Gate) to Kashmiri Gate represented the bow-string. The outer city-walls, along with the roads that connected the Lahori Gate to Mori Gate on one side and to Delhi Gate on the other side, represented the curved shaft of the bow. Chandni Chowk was the archer’s arm. In such a Hindu layout, the centre of the archer’s arm is designated as a site for a Vishnu or Shiva temple. In the city of Shahjahanabad, that place was selected for the imposing Red Fort.

It had 7 main gates for vehicular, mounted, or pedestrian traffic: Kashmiri, Mori, Kabuli, Lahori, Ajmiri, Turkmani; and Akbarabadi gates; in addition to water front gates – Nigambodh, Raja Ghat, and Qila Ghat, all three of which provided Hindus access to the river-side to burn their dead.

To superimpose Islamic architectural concepts on it, says Stephen P. Blake in the Shahjahanabad: The Sovereign City in Mughal India, 1639–1739, the Iranian architects of his court borrowed Sufi architectural traditions from the Rasail of the Ikhwan al-Safa or the Epistles of the Brothers of Purity. They drew similarities between the Cosmos and Man or between the macrocosm and the microcosm, believing the working of the human body to be an analogy for the working of the universe. 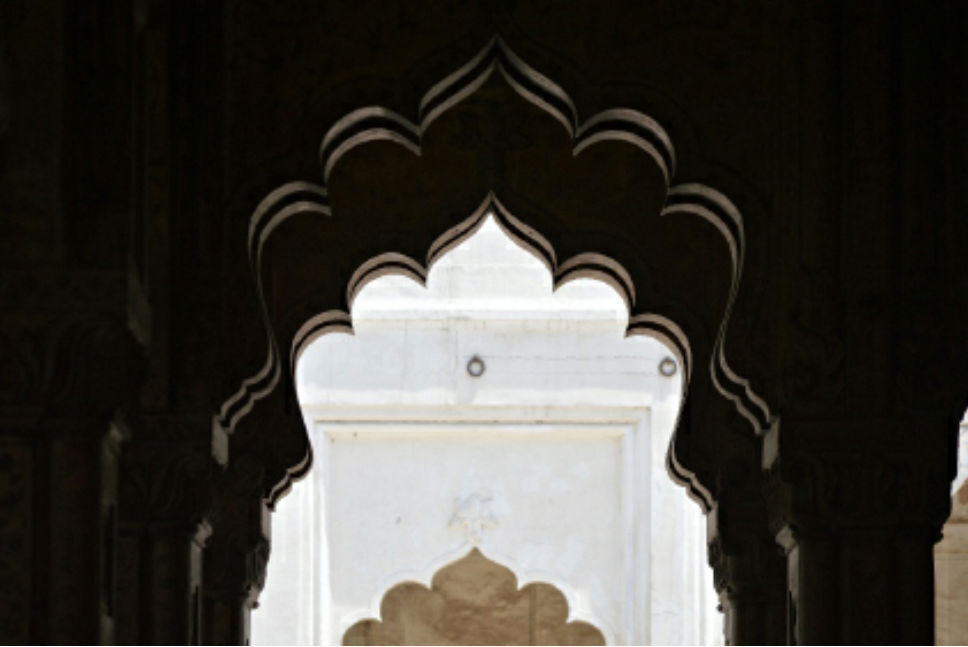 Flowing arches of the Diwan-e-Khas, smooth and symmetrical as if drawn on a pape

The same concept was also theorised by Leonardo da Vinci in his “Vitruvian Man” as cosmografica del minor mondo (cosmography of the microcosm). They laid out the new city to emulate the anatomy of the ‘Perfect Man’ (insan-i kamil) as a fusion between the two. Chandni Chowk Street was its backbone, the Jama Masjid was at the position of its heart, and the large city gates represented its cardinal points, while the Palace-Fortress was its head looking westwards towards Mecca, down the illuminated street of Chandni Chowk.

In the city, traders including foreign merchants such as Armenians, Persians, Central Asians and Kashmiris established themselves. Apart from general markets such as Khas Bazar and Mina Bazar, specific trade-based markets flourished, says Hamida Khatoon Naqvi in the Delhi Through the Ages, such as sabzi mandi (greengrocer’s market), nil katra (indigo market), khanam bazar (dealing with military supplies), nakhas (for sale of slaves, beasts and birds), and many others.

The main avenue of the city ran from the Lahori Gate of the Fort and was 40 yards in width and 1520 yards in length. On this street lay two prominent squares: the Kotwali Chabutra and Chandni Chowk.

The city had a remarkable fruit-market, with supplies from Persia, Bukhara, Samarkand and Balkh. There were three or four types of apples and pears, while black and white grapes covered in cloth were brought in wooden boxes by Afghan traders around November. The best mangoes in the summer season came from Bengal, Golkonda and Goa, of which Bernier says, ‘I do not know any sweetmeat more agreeable.’ In the Ain-i-Akbari, Abul Fazl says, “The Persians call this fruit Naghzak…This fruit is unrivalled in colour, smell and taste; and some of the gourmands of Turan and Iran place it above muskmelons and grapes. Mangoes are to be found everywhere in India, especially in Bengal, Gujrat, Malwah, Khandesh, and the Dekhan.”

Mangoes were treasured so highly that when Prince Muazzam (later to become successor to Aurangzeb as Emperor Bahadur Shah I) was on a military expedition to Hyderabad in 1685, doubts were raised by the courtiers in Aurangzeb’s court on whether he was sending the best mangoes back to Delhi or keeping some of them for himself! On another occasion, Aurangzeb’s eldest son Prince Aazam Shah became so impressed with a high-quality mango variety, that he sent some samples to his father asking him to name the fruit variety. Aurangzeb, though considered a fanatic by subsequent historians although he did maintain Mughal patronage of many Hindu institutions and continued to rely heavily on both the Rajput nobility and Hindu Kayasth and Khatri munshis and others, chose a Hindi name of Rasna-Bilas and Sandharas. The mango diplomacy of the eldest Prince did not guarantee him succession though, as he could sit on the throne for only three months after Aurangzeb’s death, before being killed by his brother Prince Muazzam: the one suspected to keep the best Deccani mangoes for himself!

Even during the reign of Akbar, Indian bazars were well supplied with local and imported fruits throughout the year. Abul Fazl says locally grown muskmelons were available in the market from February to June, then from August they came from Kashmir, thereafter from Kabul, and in the months of November and Decemeber, they were imported from Badakhshan. Grapes were brought by Kashmiri traders in August in curiously looking conical baskets on their backs.
…

We found the chapter quite interesting, and so does the book. Yes, we are reading this book and upon finishing it, we will surely share a detailed review of the same with you all :).

You can also read another excerpt from the book on FirstPost. Here is a quick link:

So, did you like reading this chapter? Have you found the book worth exploring? Do share you thoughts with us via comments below.

Previous: Red Fort: Remembering the Magnificent Mughals | A Book We Are Curious To Explore
Next: The Dark Room by R. K. Narayan | Book Review