Posted by: Editor February 11, 2020 in Books, English Leave a comment

His first published works Swami and Friends and Bachelor of Arts in 1930s were later complemented by The English Teacher to complete a sort of autobiographical trilogy. Between these works though he wrote a book called The Dark Room in 1938. Subtitled as The portrait of Marriage within Closed Doors, this book touches on wide range of aspects that make the Indian household, and captures the almost never-changing world of married life. Recently, I came across an old copy of this book (published in 1990) and would like to share my thoughts on it on behalf of Team Thinkerviews. 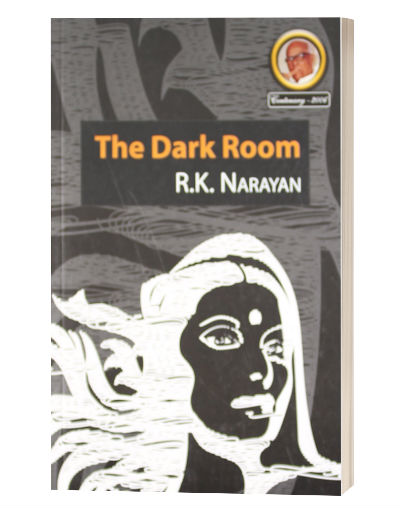 As you can see, being a classic book from old times, it has an authentic vintage look. It uses very basic colors. The illustration and the use of colors goes in sync with the book title. Also, the use of a dark yellow color in the title makes it a little more attractive. A small photograph of the author, adds to the authenticity of the book.

Of course, the cover page is not very attractive. It represents a vintage look authentically.

In the household of Ramani and Savitri, it is just another day. Their son Babu claiming to be ill at the time of school, Savitri wanting to keep him in bed and Ramani insisting that he should go to school and that the mysterious illness will disappear by the time of playing cricket. Ramani gets through his morning ritual of eating before he leaves for office with enough complaints to keep Savitri on her toes. Once he leaves, Savitri eats and rests while the Cook goes out to meet his friends. Soon it is afternoon and Savitiri’s daughters come home. Evening eases out into night. The whole household holds its breath until Ramani comes home in a good mood and the routine continues every day with little skirmishes and fights over things small and big. When upset, Savitri takes to a dark room where she sulks – a bit like Kaikayi’s kopbhavan.

Such is their life until Ramani hires the first ever female employee in his office at the Engladia Insurance Company – a young and comely woman called Shantabai who is all alone in the world. Soon he takes to spending his evenings with Shantabai instead of visiting his club. Things get worse as he starts to come home only in mornings. Savitri tries cajoling, pleading and then issues an ultimatum that Ramani can’t have both of them. When he refuses to give Shanta bai up, Savitri leaves home. She is not allowed to take her children with her.

Meanwhile, life at home goes on. Ramani is paying extra attention to children but is afraid of what has become of Savitri. And so he is relieved when she comes back home.

Nothing has changed however, is there ever any hope of changing these things?

When you think that this book was written in 1938, you see why the great writers are acclaimed as such. Even in this modern era, where rise of feminism and equality for women are well-worn concepts, this book resonates. You have met these characters, seen their lives around you in almost every household. On surface, Savitri has everything – cook, maid, servants, children, husband. What does she have to do whole day but to rest? Surely, managing the household with all tools of the time should make it an easy task. Then it is managing the moods of the husband who has all the rights to be unpredictable, irritable and precarious at times.

Ramani in his mind, is a good husband – a self-made man who provides a good living for the family. All worldly goods and place in society. Surely, he has done his duty and is entitled to be attracted to an educated, mysterious person like Shantabai. There are no external difficulties like poverty or any sort of violence, but the inner turmoil that push these characters to behave like they do.

In this fictitious town that is so out of real life, R K Narayan brings to life a typical marriage. The little caprices and little injustices along with moments of happiness. The continuous power struggle between man and woman of the household, the finality of no escape and the institution of “give and take”. While you praise Savitri’s courage in standing up for herself, it is heart-breaking to see her give it up for the familial comforts of home and security. It is easy to talk about dignity when you have a shelter. Life makes you compromise for even the barest means of survival and the price is sometimes beyond compensation.

There is no judgement anywhere in the authors tone. He is but an objective bystander who brings to life the everyday world and portrays the people in it as he sees them:

In an hour a fantastic world was raised: a world inhabited by all God’s creations that the human mind had counted; creatures in all gay colours and absurd proportions and grotesque companies. There were green parrots which stood taller than the elephants beside them; there were horses of yellow and white and green colours dwarfed beside painted brinjals; there was a finger-sized Turkish soldier with not a bit of equipment missing; the fat, round-bellied merchant, wearing a coat on his bare body, squatted there, a picture of contentment, gazing at his cereals before him, unmindful of the company of a curly-tailed dog of porcelain on one side and a grimacing tiger on the other. Here and there out of the company of animals and vegetables and mortals emerged the gods – the great indigo-blue Rama, holding his mighty bow in one hand, and with his spouse, Seeta, by his side, their serenity unaffected by the company about them, consisting if a lacquered wooden spoon, a very tiny celluloid doll clothed in a pink saree, a sly fox with a stolen goose in its mouth, and balancing acrobat in leaf-green breeches; there stood the great Krishna trampling to death the demon serpent Kalinga, undistracted by the leer of a teddy bear which could beat a drum. Mortals and immortals, animals and vegetables, gods and sly foxes, acrobats and beats, warriors and cooking utensils, were all the same here, in this fantastic universe conjured out of coloured paper, wood, and doll-maker’s clay.

As the author captures the age-old complaint of the husbands:

Women are exasperating. Only a fool would have anything to do with them. Hours and hours for dressing! Why can’t thy put on some decent clothes and look presentable at home instead of starting their make-up just when you are in a hurry to be off? Stacks of costly sarees, all folded and kept inside, to be worn only when going out. Only silly looking rags to gladden our sight at home. Our business stops with paying the bill. It is only the outsider who has the privilege of seeing a pretty dress.

But he also doesn’t forget the perpetual question in a wife’s existence:

Was there nothing else for one to do than attend to this miserable business of the stomach from morning till night?

I quite liked the following thoughts on women’s roles in this world without making it about feminism:

I’m a human being. You men will never grant that. For you we are playthings when you feel like hugging, and slaves at other times. Don’t think that you can fondle us when you like and kick us when you choose.

Or how mis-interpreted it can be:

She left home when she pleased and went where she liked, moved without an escort, stared back at people and talked loudly. Her husband never interfered with her but let her go her own way, and believed himself to be a champion of women’s freedom; he believed he was serving the women’s cause by constantly talking about votes and divorce.

He granted there was some sense in the Women’s movement: let them by all means read English novels, play tennis, have their All-India Conference, and go to pictures occasionally; but that should not blind them to their primary duties of being wives and mothers they mustn’t attempt to ape the Western women, all of whom live in a chaos of promiscuity and divorce.

Through the dialogues and the narrative, R K Narayan creates relatable characters and the very believable life they lead – for that’s what they are taught from childhood. The need for conformance is so enforced in us through punishment or bribery and fear of everything around us:

One definite thing in life is Fear. Fear, from the cradle to the funeral pyre, and even beyond that, fear of torture in the other world.

Afraid of one’s father, teachers and everybody in early life, afraid of one’s husband, children and neighbours in later life – fear, fear, in one’s heart till the funeral pyre was lit, and then the fear of being sentenced by Yama.

In spite of never overtly mentioning it, the author does make you question the basis for the life described here and also the inevitability of how it goes on in the same pattern for eternity – all the little joys and sorrows overpowering in their demands on daily basis and the big questions never asked or answered, the need to vent one’s frustration and anger on anyone who is weaker than us. There are no happy endings in this world. The life here is a sum of such days and is over with equally well-established rituals and finality.

For all its intricacies, “The Dark Room” is a short book, and won’t take you more than a few hours to read, but will surely leave you a fair bit to contemplate.

Previous: Shahjahanabad: The City and Its People | A Chapter From Red Fort By Debasish Das
Next: The Conspiracy at Meru by Shatrujeet Nath | Book review