GiveAway Of The Month
Home / Books / Daredreamers: A Start-up of Superheroes by Kartik and Ravi Nirmal Sharma | Book Reviews

Daredreamers: A Start-up of Superheroes by Kartik and Ravi Nirmal Sharma | Book Reviews

Recently we came across a book named DareDreamers by author duo Kartik Sharma and Ravi “Nirmal” Sharma. It is interesting to know that Kartik and Ravi are father-son duo! We often see two siblings or friends working as a pair, but it is rare to see a father and son as a team of writers.

When the authors approached us with their book, we were curious to explore the book, as we found the title and the cover page of the book quite interesting. A start-up of superheroes! Who doesn’t want to know more about it? So, we’ve decided to read the book. The review is unbiased as always. 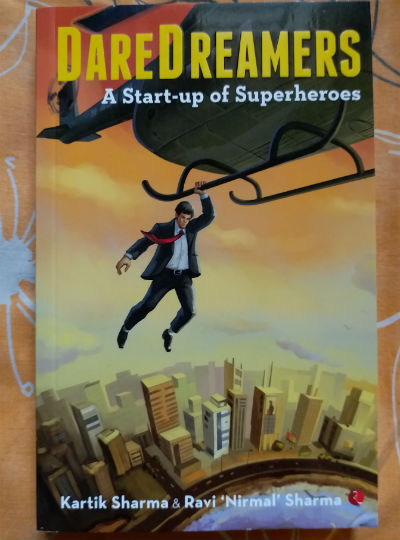 Daredreamers: A Start-up of Superheroes by Kartik and Ravi Nirmal Sharma | Book Cover

Rasiq – an intelligent and clever youth has just completed his higher studies and just joined the rat race of work life. He got a good (in terms of pay) job in Mumbai and is arrived into the city to join it. Management jobs are all about fantastic appearances and getting buried into the workload. His long-term committed girlfriend also joined a similar job in another company. Both of their work-loads are pole apart. While Rasiq didn’t get much time to take food or even enough sleep, his friend had enough time to get relaxed and even weekend parties too!

We all know that “living” is the most important thing we can do with the life.

But, we all get pre-occupied with the hustle and bustle of the life that we knowingly/unknowingly get trapped in the rat-race.

Rasqi also got trapped in the pre-defined course of the life that he almost forget that it is to be lived. His job took its toll. As he stopped getting any personal time, he got more and more desperate. There is, of course, a silver lining in the cloud. He was able to repay his study loan and even purchase a bike of his dreams. But, is life all about getting material happiness only?!

One day Rasiq finally took some days off and went abroad. Here, by living a few days carefree he found what he is looking for. After, coming back, he left his (high-paying) job!

The story actually starts from here. What happens from this point forward is better to explore by reading the book. In the course of events, we are introduced to many important and interesting characters like Narad Money, Rakeysh, Nick, Arjun, Natasha, Vyom, Halka, Radhika, Samar, and others.

The book is distinguished into 4 different segments, and, each of them is having its own flavour. While reading the first segment of the book, I thought many times to put it down. There is a dose of cuss words and adult material in this segment. I could have given it 2 out of 5 stars for the segment. The things are changed (for good) since the 2nd segment though. The book takes a U-turn from this segment. I found the content from this point onwards quite interesting. 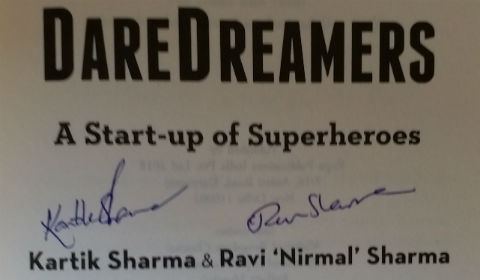 Daredreamers: A Start-up of Superheroes by Kartik and Ravi Nirmal Sharma | Author Autographs

The author duo has a unique style of writing, and they are often asked, how they manage writing together and which part of the book is written by whom? As it is mentioned in the book itself, for the first draft, both of them writes different segments. Eventually, they put it together and then the re-writing, editing and touchups are done by both of them together. It requires a specific level of understanding. And, for a father and son, having that rapport by overcoming a generation gap is quite a challenging job. I appreciate the way they work together. Tough, in terms of writing, you will clearly be able to distinguish the first segment of the book from rest of the three segments.

The authors are good at exploring the characters and setting up the story. The first segment could have been edited out from the book completely. However, it sets the prologue of the story quite well.

I like the way the author named the characters in the book. There is a mixture of modernity and traditional names in most of them. Be it Rasiq (instead of Rasik) or Narad Money, or even Rakeysh or Halka (for Hulk); they are not only interesting but the names explore their attributes quite well.

In terms of writing, the authors are able to explore the inner side of the corporate business with conviction. Of course, not all the aspects are bad, but the outside glamour and high paycheques often cover the darker sides of the business operations from the people; which is shown here.

I like the way the spirit of metro-city Mumbai is explored in the book. And, it is not the business tycoons or political leaders or celebrities who represent it, it is the common man of the city. The way a tea vendor offers free tea to any newcomer for the first days by just remembering a similar gesture to him done by someone years ago; shows that the how simple and genuine a life can be, if we don’t try to make it very complicated. Here is his gesture (as mentioned in the book):

… Pay me tomorrow onwards. I cannot forget my first day in Mumbai. I was penniless and managed some food that day thanks to a kind man. I am just repaying the debt I owe to the city.

The twisted fable of “hare and a tortoise” gives this book an interesting start.

The book has some interesting punchlines:

Creation is about diversity.

This guy sounds more like a tormentor rather than a mentor!

My life in this urban jungle feels like that hare in the race with the tortoise.

The book has some wisdom lines too:

It is easy to imagine the worst when your emotions are heightened.

And no labour of love can be tiring or upsetting.

My life is too short to waste running mindless races.

You move up the ladder to find another ladder. … But the ladder you are on is beyond the wildest dreams of most people. Be proud of yourself.

… But that’s the catch with choices. In moments of pain and misery, they become the source of everything gone wrong.

There are some lines with dark humour and sarcasm, which you will enjoy reading:

Always do the opposite of what a woman tells you. You’ll go far in life.

Are you incubating the plan by sitting on it? Or will it require you to move your ass too?
Only asses move their ass, Mr. Rakeysh. Smart guys move their minds.

I am sure you will find the following lines interesting:

… first impressions are hard to erase.

He’s gone from intimidating to appeasing in less than sixty seconds.

Searching is a lot easier when you know what to look for.

So, by now, you should already have got the idea about the quality/style of writing to expect from the book.

The book is a little lengthy one, but once you are in the second half of the book, it will grip you and urge you to complete it, making it comparatively not so long read. Also, the way the challenges are coming to DareDreamers and the way they come up with the imaginative solutions will make it a pleasant experience to read it. The way the client keeps ignoring the start-up team and rescheduling the meeting every now and then will make many entrepreneurs deja-vu feelings. The love story of Halka will remind you of some Bollywood movies, and the foreign holidays will make you remember the films made for upper-middle-class and NRI audience.

The strong female characters of the book talk about the gender equality without uttering a word about the same. The stuntwoman and her adventures will make her an equivalent buddy of her teammates.

There are a few more aspects of the story which we cannot talk much about, in order to avoid spoilers.

Overall, a little lengthy book, which becomes interesting after one-quarter of the same is gone. It has its own dose of cuss words (especially in its first segment) but the things remain on track and then after, making it a good thriller to read. If you enjoy some of the modern Bollywood movies and have a flair for reading thrillers, you will enjoy it. The concept of the book is fresh.