The name Tolkien is familiar to book lovers worldwide and gained even more recognition with the film adaptations of J. R. R. Tolkien‘s “Lord of the Rings” trilogy and “The Hobbit”. Simon Tolkien is the grandson of the acclaimed writer and has carved his own path in the world of fiction with his books featuring Inspector Trave.

We found the premise of the first book of this series – The Inheritance interesting. We liked the book and here are my views on this book on behalf of Team Thinkerviews. 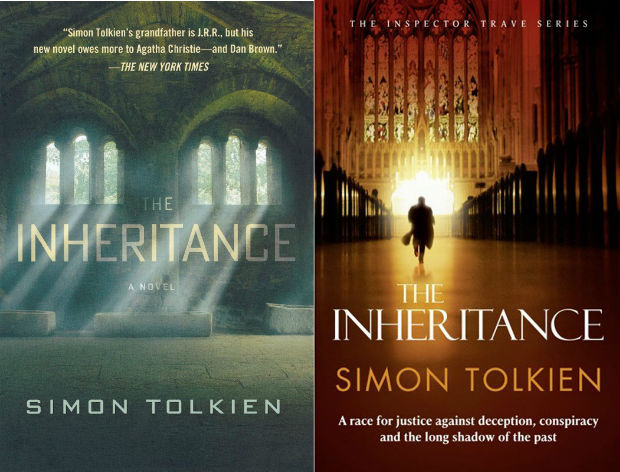 Published by Minotaur books in 2011, original version of this book has a moderate cover page that is enhanced a lot in the recent most edition of the book.

As you can see, the original cover page has a vintage look featuring the prison like walls with the shades of green while the latest version has a quite cheerful reddish-brown color scheme. The stained glass windows and pews indicate the quest for a religious relic. The quest and ‘run-against-time’ theme of the book is accentuated on the coverpage by the person running towards the light. This coverpage gives more of a ‘religious treasure hunt’ feel similar to books like ‘Da Vinci Code’.

The byline ‘A race for justice against deception, conspiracy and the long shadow of the past’ captures the premise of the book succinctly and will attract all lovers of thrillers and mysteries.

It is 1944, the last days of “World War II”, when a small farmhouse in Normandy, France is invaded by Colonel John Cade and his men. He is looking for something ancient and valuable. The visit ends with brutal murders and a house burnt to ashes.

Cut to 1959. John Cade has been murdered in his home and the prime suspect is his son Stephen Cade. We meet the main characters as the trial of Stephen Cade is about to begin. The case seems to be cut and dried with evidence stacked heavily against Stephen.

The only thing against his conviction is Inspector Trave‘s instinct. As the book progresses, we meet the other people who were present in the house at the time of murder: John Cade’s adopted son Silas Cade, John Cade’s assistant Sasha, Cade’s old friend Reg Ritter and his wife and Stephen’s girlfriend Mary Martin. All of them have something to hide, an ulterior motive and have held back truth during their interviews with the police.

Not only Silas has as much to gain from the murder as Stephen, we also find out about his obsession with Sasha, his affair with Mrs. Ritter, his habit to listen into conversations and ferreting for secrets.

One of the bigger secrets, however, is what Sasha has been after. John Cade became an eminent art historian, but only by stepping over heads of other talented people – including Sasha’s father. John Cade ruined his personal as well as professional life. Sasha wants revenge. She is after the mysterious artifact – St Peter’s cross that John Cade has been trying to locate his whole life:

The cross of Saint Peter was made from the wood of the true cross. It was adorned with gems, the like of which the world has never seen before or since. The great diamond at the centre of the cross was said to be the same white stone that Caesar once gave to Cleopatra, Queen of Egypt, to seal their illicit union, and the four red rubies were taken from the crown of Alexander the Great.

With the courtroom drama swiftly leading to the unraveling of secrets and yet towards the end of the road for young Stephen Cade, Trave decides to visit France and visit the place where the tragedy of 1944 took place.

Will this visit give him the answers he needs or will Stephen Cade hang irrespective of whether he killed his father or not?

The book starts with a very Agatha Christie murder in an old country house, behind closed doors and with five people in the house being prime suspects. Each has a motive to want the victim dead, each has secrets, each stands to gain something or other. But, the book has a bigger canvas as it also brings us the worlds of London prison and its courtrooms and the typical personalities in the world of justice. The author highlights the prejudices and power play of this world as he shows how quickly and clinically people were hanged to death. There was really no room for mistakes for the prosecution to build their case. The author gives us background information on the death penalty at the beginning of the book, which you’ll find useful as you read through.

And the parallel thread following St Peter’s Cross and the Codex that can lead to it has a very Da Vinci Code treasure hunt feel. We visit the world of beautiful books, ancient texts in codes and long forgotten tombs housing the secrets of ages gone by. The power such artifacts hold on human minds is incredible.

I liked the book for its vast canvas and the way it merges together the above-mentioned elements, each of which is good enough for a book of its own. Additionally, Simon Tolkien has populated this world with characters that are equally complex. No one appears who they are on the surface – except Stephen Cade may be.

John Cade is an art historian on surface, a ruthless murdered underneath. Silas carries the trauma of becoming an ignored, adopted older son once the Cades’ natural son is born. Reg Ritter is a sociopath and his wife is trapped in leading to nowhere existence with him, finding solace in Silas’ arms. Sasha carries a scarred, burnt face to match the scars of her childhood when her family broke apart due to John Cade. And then there is Mary, an actress who brings sunshine in Stephen’s life only for all of it to end in darkness. It is a world of smoke and mirrors.

And there is Inspector Trave. Struggling with the guilt that every surviving parent carries when their young children die. The author tells us all about his temperament and career in only a few sentences:

Trave was something of a legend in the local force. He was very good at his job. Everyone agreed about that. He got results, but he did not inspire affection. He had no nickname, and no one seemed to have ever visited his house. Trave’s fellow officers knew where his lines were, and they took care not to cross them. He was a loner, and perhaps this was why he had not achieved promotion above the rank he’d held for the last fifteen years.

Throughout the case, he struggles with himself for not doing more thorough investigation before charging Stephen. He is just not sure if the uncertainty is driven by his emotional response as he sees his dead son in Stephen or his instinct as an investigator:

Empathizing with the main suspect in a murder investigation was no way to do his job.

You had to concentrate on the facts and follow them where they led.

As a policeman, he tried to bring order to a disordered world. And as more deaths follow John Cade’s, Trave makes up his mind:

There was only one way to untie a knot, and that was to go back to beginning.

One of the best lines in the book is when the author describes what most parents feel at all times:

We’re walking on ice. All the time on thin ice, and we just don’t know it. We think its solid ground, until it breaks.

The author also gives us some very pithy remarks about how hindsight is such a wonderful thing:

Everything is easy once you have the answer.

But sometimes, it is too late by the time you find the answer. The world of justice ruthlessly moves on. Even if the characters survive their ordeal, they will carry the scars for rest of their lives. Betrayals are hard to face and harder to live with, as the mind keeps going on in an endless loop of whys.

We enjoyed reading this book and will carry on exploring rest of this series. It is a recommended read for all fans of crime thrillers with a treasure hunt thrown in….