India (that is Bharat) has the most ancient civilization existed in modern times which is enriched with the knowledge and wisdom preserved in the form of literature. Vedas spread and kept alive through the tradition of telling and listening from generation to generation.

Knowledge and wisdom are possibly the most essential treasures we need to own and carry forward, however, it not easy to convey it to the others. Often, it becomes boring and tough to absorb for the learner to go through these philosophies.

Our ancestors have found a fantastic way to overcome this hurdle. Why not weave the messages to convey in a metaphor or an interesting tale and then spread it?! Eventually, it would be read or listened to with an interest and the message you want to convey will reach its target! It is a proven technique and the tales of PanchTantra or Hitopdesha are examples of the same. And, it is seen that many civilizations in the world followed the same technique and such tales are found in almost all the areas of the world.

Vedic tales belong to ancient times, and PanchTantra and other tales are quite modern in that context. The current generation is quite absorbed into western tales and quite obsessed with them and a large number of young adults are not even familiar with the rich inheritance of literature we possess.

Possibly, that’s why the tradition of “re-telling” various tales came to existence and became quite popular.

Shubha Vilas, an engineering graduate who later studied patent law had a short stint into the corporate world. He, however, decided to carry forward his journey in the field of spirituality. He started giving lectures on many topics including management weaving ancient tales and metaphors in his talks. He has delivered more than 4000 lectures till now.

Recently, we got a chance to read his book Mystical Tales For A Magical Life and fortunately from our team I got a chance to read it. Let me share the fact that the book was provided by Fingerprint Publishing! and the review here is unbiased and uninfluenced as always.

As the name suggests, it is a compilation of 11 Vedic stories. But, before we talk about the book content, let us take a look at the book cover.

I strongly believe in the fact that “a book should not be judged by its cover”. And, at the same time, I have also experienced the influence of a book cover in the majority of reading and/or purchase decisions. So, personally, I consider it as one of the important aspects of a book, or for that matter, any media. 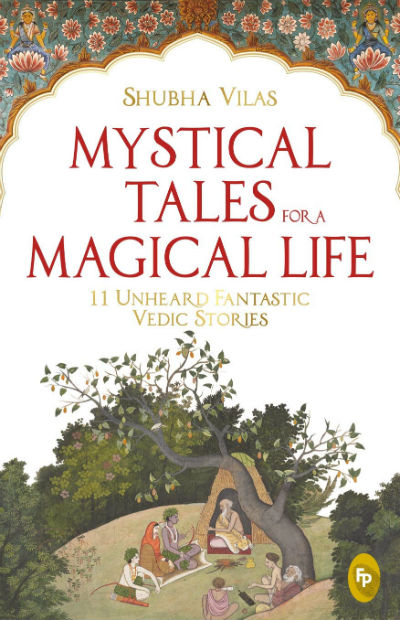 It is tough to design the cover for a short story collection where stories belong to ancient times. The designers, however, know their job pretty well. The entire cover page is given a look of looking through a palace window where you can see people are learning for a sage sitting in a hut under the shades of a tree.

To me, the cover page design conveys the following message:

No matter how prominent figure you are or the deadliest battle you fought and conquered, or your are just a humble human being, you have to set aside all your egos and learn from the learned

The golden yellow color used for the tagline and author name looks a little dull and could have been made better. Overall, an interesting cover page which is not super attractive but true to the book content and uses cheerful yet mild colors.

Our regular readers know that we usually distinguish our reviews in two segments. In one segment we take a bird’s eye view of the story and in the other, we share our views and reviews for the same. This book is a little different as it is a collection of stories. To avoid spoilers we cannot brief all the stories. But, I will share the titles of all the stories to give you the basic idea about them.

While the stories are not unknown to many, a majority of the readers might have heard only a few of them. So it will give “exploring a new story” experience to them. Also, the way the stories are looked at and explored in author’s own words makes them interesting.

The USP of this book, as far as I can deduce, is not one but actually, are two points.
The summary of the messages and life-lessons to learn for the respective story at the end of each of them is one such factor. The author brilliantly summarizes the things in simple words and conveys the “moral of the story” in this segment. I will recommend not to miss a single line from any of these segments. The italics text may affect a little to reading experience but it is worth going through.

Another thing I consider important in the book is the small inline black boxes with white text exploring important message(s) from the respective paragraphs. It has some gem of thoughts to learn. Actually, you can have a collection of the content of these inline boxes and can use almost all of them as your “thought of the day” kind of motivational messages.

I also like the way the story of Kacha and Shukracharya (of course, Devayani is there too :)) is explored. The story is re-told by many authors from their own perspective, however, the way Shubha Vilas summarizes the same is quite unique.

For Kacha, the mritasanjeevani mantra meant this: seek satisfaction rather than happiness.

I also like the way the author has talked about the eligibility criteria for a learner.

No other factor determines the ability to learn as much as the desire to learn.

This is a simple line, but it holds the essence of our civilization. In other words, getting the right education is a fundamental right of a human being regardless of the other factors. Remember, the rejection from getting unbiased education is referred many times in The Mahabharata. And, the consequences are not humble.

The author beautifully summarizes the difference between a learned (in a true sense) person and his/her counterpart.

The essence of education (in a true sense) is explored from a different perspective in this line:

The story of Garuda and Nagas will reinforce the fact that the quality overpowers quantity at any given context. Of course, the struggle will be there. You can compare the situations between Garuda and Nagas and you can draw parallels with the final battle of Mahabharata.

You can also compare the situation of the competitiveness among the wives of the same person (Kadru and Vinata both were wives of sage Kashyapa) to the Ramayana (Kaushalya, Sumitra and Kaikeyi were wives of Dashratha) which lead them to put their sons against each other. Of course, the context is different as the brothers in Ramayana are grown together so they have love and affection towards each other, so their bond eventually remain unaffected, however, sons of Kadru and Vinata were infused so much hatred against each other, and more importantly they never had a time together along with their stepbrothers to know and connect with each other. Which eventually lead them to fight with each other.

I found the following line about bravery, comfort zone and possessiveness quite interesting.

You could either stay holding onto your comforts and be forever a bud or take the risk of exploring the impossible and blossom into a flower.
— — —
Most people stop using things for fear of losing them.

Here are some lines which are philosophical yet realistic and one must remember the essence of.

By celebrating other’s failures, you sponsor your own humiliation.
— — —
Self-love is blindness that obstructs you from recognizing people who love you selflessly.
— — —
Instead of losing appetite over other’s bad behavior, one should learn to digest it.
— — —
Sometimes we become proud of the very thing that should make us ashamed.
— — —
Concealed in every loss is a front of gain and in every gain a seed of loss.
— — —
When insensitive people experience insensitivity, they became highly sensitive.
— — —
Punishment is mandatory, but being humane is very important.

There is a reason that Lord Krishna advised to become detached in all the circumstances:

Because sometimes we expect to be praised for all our actions by everyone and if not given the same by others, we lose our peace of mind for that. This leads to many complications. The author says a similar thing in different context through the following line in the book:

The desire for respect is like an addictive drug. Even one dose missed magnifies the craving intensely.

You should also read the story or Brahmas (yes, there is no spelling mistake here, there exist many Brahama!) to understand that despite knowing a lot, there remains a lot to be learned. Probably, much more than already known.

I also like the way the author describes fear.

So, by now you must have got an idea about the quality of the content in the book and what to expect from the same.

The tales are narrated in simple words, yet I will suggest you to re-read the tales to get the essence of the same. Some characters are unknown and thus you may need to take time to digest them.

Such books must be there in your library.

I will recommend this book especially to teenagers and young adults alike. It is for everyone who is looking for some interesting tales which elaborate life lessons and help one to understand the life better, become a better human and get inspired as well.

One Day, Life Will Change By Saranya Umakanthan | Book Review