If you have been reading Indian authors writing in English for the last decade, you couldn’t have helped but notice the works of Amish Tripathi who swept the readers off with his re-telling of Indian mythological tales through Shiva Trilogy and Ramchandra book series. We have been amongst the readers and admirers of these stories and have wrote about those here on Thinkerviews platform already.

And now Amish Tripathi has ventured onto working with a writer’s collective – sort of a franchise like an arrangement – where the research and writing of the book are completed by other writers while Amish Tripathi edits and creates the final version of the book. There are a lot of authors who work like that, e.g. Tom Clancy, James Patterson, etc.

The first book released under this arrangement is – Legend of Suheldev.

There have been a fair amount of controversial discussions around this project, as is natural for anyone trying to venture into historical stories from India. It is not uncommon to face protests as well as praise when you make something that features figures from the history of the Indian subcontinent. But amidst the media storm, the book was released in 2020 and recently we had a chance to read it as part of Amazon Kindle Unlimited subscription. So here are our thoughts on the book. 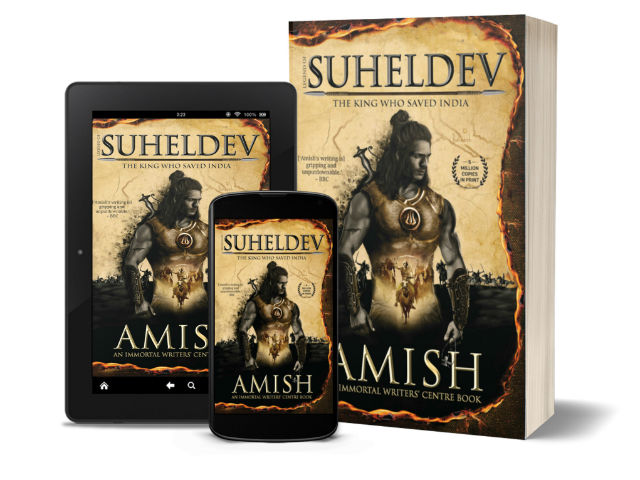 Being a historical fiction about a legend, the book is expected to have a cover page that reflects splendour. And that is what you see on it. The illustration of Suheldev with hair tied in a bun, wearing a war armor and traditional Indian (that is Bharatiya) attire, occupies the major area of the cover page. Of course, you will find the traces of Greek mythology in the cover page. It is attractive for sure.

The book starts with the destruction and desecration of Somnath temple at hands of Mahmud of Gazni. Young Mallaldev, prince of Shravasti, dies in service of Lord Shiva.

When his family hears of the news, Mallaldev’s younger brother Suheldev becomes destined to carry on the battle that his brother was part of. His father King Mangaldhwaj and Suheldev approach the emperor Ajitpal of Kannauj looking for an alliance to fight against the invading Turkish armies. But, no such luck. While returning to Shravasti, they run into an altercation with Turkish soldiers and win. Young Suheldev decides to become a prince in exile and take on guerilla warfare against Turkish armies.

A few years go by and Suheldev gains a reputation as a bandit prince, who is death personified for Turkish soldiers, but shows respect to their women and children, protects all Indians whether they are Hindu, Muslim or Buddhist and builds himself a devoted band of soldiers who follow him with absolute loyalty.

When king Mangaldhwaj passes away, Suheldev becomes the king of Shravasti. He solidifies the alliance of almost twenty one kingdoms of Northern India and sends the message of peace and friendship to emperor Rajendra Chola in Southern India.

For trouble is on horizon already. Although Mahmud of Gazni has died, his nephew Salar Maqsud is back to India with plans to lay devastation to this land and its people.

Suheldev is bringing an army together to fight him, but there are traitors amongst the best of armies. Will Suheldeve’s army win against external and internal foes?

With this book, Amish Tripathi has ventured into historical fiction rather than mythological fiction and he makes it very clear in the introduction about how he has avoided allocating any specific caste to Suheldev as that would override the message of the book that wants to emphasize that “divided we fall”. If you are looking for historical accuracy, you will also find that this book is not going to match exactly with the legends and stories told about King Suhaldev/Suheldev in particulars, although it is a very good mirror when it comes to ideas and forces that may have driven a king like that.

While it is easy to see that the stage is set by others, there are definitely segments that are trademark of the author – his philosophical discussions especially are all there for the readers to enjoy.

But this also means there is a slight discrepancy here and there in how the characters develop and you may find that some disappear after a short glimpse only. Previous books by Amish Tripathi have featured strong female leads, however, this book is different, e.g, Toshani – the most influential and at times solitary female character in the book is tasked with training female soldiers, however, no such platoon features in the final battle.

The book does take a bit of time to draw the reader in as there are characters introduced and a few unconnected incidents are shared with us. The book is about Suheldev, but he is not there in every scene, or every event. Rather events unfold around him and he is more of the driving force that shapes them around him through his reactions.

In saying that, the book is an enjoyable thriller with all the right ingredients – brave heroes, valiant soldiers, loyal devotees of all faiths and even identical twins :). By the time the final battle takes place, you do want to know what happens. It is a real page-turner by then.

The book does deal with a controversial subject and it is good to see a mainstream author writing about the religious and cultural divides and perceptions in a time where it can face criticism from intolerant factions of all faiths. Throughout the book, Amish discusses the ideologies of Hindu and Muslim religions and what works for the both:

The book brings up all the familiar traits of Indians vs Invaders as it played over centuries – the greed of the invaders, the riches of India, the tendency of Indians to fight amongst themselves, their sometimes misplaced ideas about honour, our tolerant nature and preference for non-violence and so on.

But with the creative freedom of an author writing about events past also makes his characters ruthlessly take advantage of the beliefs of their opponents when they need to:

What if life has brought a warrior to a fork on the road where he has only two choices. On one road, he can keep his honour and protect his soul from committing a sin. But in doing this, he will allow the enemy to come back and cause death of thousands of innocent people. However, on the other road, the warrior takes a sin on his own soul and he will be punished according to the laws of karma. But by committing this sin, the warrior ensures that the enemy never returns and his people do not die. What does dharma say?

The Divine is everywhere. In the stars and skies, in the trees, in the rivers, in the wind, in all of us. Our faith is what actually puts God Himself into an idol. If we all die, then our faith dies. If our faith dies, then who will worship the idols? Remember, new idols can always be made and pran pratishtha done on them. But if our faith dies, then its all over. And our faith exists only in our beating hearts. So, if there is a choice between saving an idol for us, I will always chose us.

Suheldev grows up in the book – from a young, spirited, quick with his sword soldier to bandit prince to king of Shravasti. Through his journey the author shares the nuggets about what a leader in India is meant to do:

Becoming a leader is not about being able to fight or argue or make speeches. Its actually about realising what must be done for the greater good. And doing it, regardless of the personal costs…

One of the problems with our modern Indian rulers is that they have lost the curiosity that possessed ou ancestors. Only when you are curious will you try to understand other ways of life. Especially of those who are your enemies. For, if you dont understand your enemies, how can you defeat them? Even more importantly, unless you are curious about and understand your own society as well, how will you know how to mitigate your own weaknesses and increase your own strengths?

A land does not die because there are some who hate it. For has there ever been a time when hatred has not existed in the world? A motherland dies when her own children stop loving it!

And naturally, there is a discussion about the right ways to fight your enemies. Do we chose the path of non-violence and tolerance as befits a civilised land or do we have to become savages to fight savages:

Violence is no solution to anything. It only creates a chain reaction that ends up destroying everybody. The desire for revenge is a fire that consumes both the target and the seeker.

The biggest fear is that in fighting the monster, we ourselves will become like the monster, if we lose our innate liberalism and open-mindedness, then what is the point of winning?

There are soldiers of all religions in Suheldev’s army. The writers talk about various sects of Hinduism, Islam, Buddhhism and talk about persecution of people of any faith that doesn’t suit the ruler and the essence of religion. The Buddhist monks, raised in the principles of non-violence, have to fight for their motherland and so do the Muslims of India:

Being torn between two parts of your identity? navigate the space between your brotherhood and your motherland..your religion and patriotism…Don’t you feel frustrated that you even need to chose, or put one before the other?

The book points out that almost all civilisations erode with time and while the stories about Gods from Greeks, Romans, Egyptians and Mayans have survived, the world is fast becoming a place where the ancient religions are no longer perceived as relevant. But it will be a loss indeed if we lost the knowledge and wisdom of our ancestors, no matter where in the world were they located:

If Hinduism dies, the world loses its last major connection with the ancient way, religions based on wisdom and the spirit of questioning.

The book is filled with a lot of apt one-liners:

Anger has its place. But information on the enemy is more important than immediate vengeance.

An enjoyable book if you have a few hours up your sleeve and want to think about the complex historical forces at play that led to our world and our lives as they are today.