Aravind Adiga is widely known as a brilliant writer since his debut novel The White Tiger won the “Man-Booker prize” and carried on to become a best-seller. He has gone on to write more stories about the huge divide – social and financial – as India grows by leaps and bounds in all directions. His latest book, however, is set in Australia and explores the trajectory of migrants and refugees.

This is an ongoing crisis worldwide and we have reviewed Amitav Ghosh‘s latest novel here on Thinkerviews, which talks about refugee problem and climate crisis:

We have been reading Aravind Adiga’s books lately and we thought we would start with our thoughts on this 2020 book, so here they are on behalf of Team Thinkerviews… 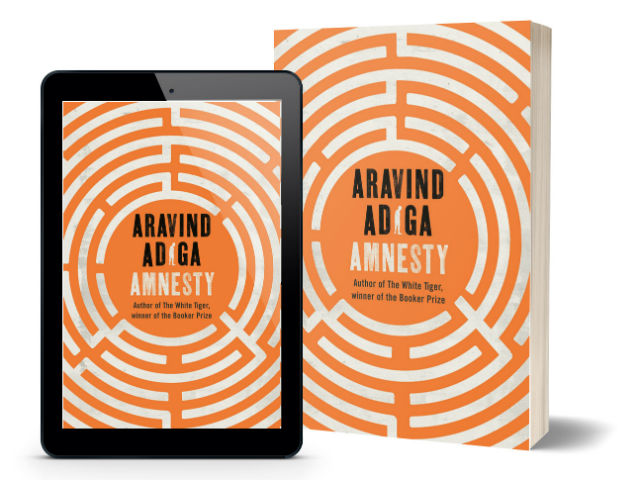 Actually, we found two different versions of the cover page for this book. In one of them, we see a colorful rounded maze pattern having a person (illustration) within. The second one is embedded above. As you can see it is a maze. It uses saffron and white as the dominant colors and the author’s name and a few words about him in black in the middle of the maze. Overall, it looks a very simple cover page. When you read the story, however, you will find it thoughtful and relevant also showing how defeated a person can be once trapped in such a maze.

It is a typical morning for Dhananjay Rajaratnam – Danny – in Sydney as he makes his way to his first cleaning job of the day. Known as a legendary cleaner Danny takes quite a bit of pride in his excellent work ethics and honesty. Just as he is about to finish his first job of the day, he sees that the police is out in the force and have surrounded the neighbouring house.

Slowly, the story comes out. A woman called Radha Thomas has been murdered.

And from this one fact, Danny’s life starts unravelling. You see, Danny is staying in Australia illegally. He cleans houses for cash and he used to clean two houses for Radha. One was her marital home and the other, where she met a lover called Prakash.

Over the course of the day, we learn about Danny’s life in bits and pieces as he struggles with his conscience. He is probably the only person who knows about the volatile affair, about the chronic gambling issues that both Radha and Prakash struggled with, the suppressed violence and the sense of failure around them.

He calls Prakash and then Prakash calls him back. He wants Danny to go to his house and clean it before Prakash leaves the country that night.

If Danny goes to the police and tells them Prakash is the killer, they would surely find out that Danny is an illegal and deport him. If he doesn’t do as Prakash asks, Prakash will tip-off Immigration about who Danny is and then they will surely deport him.

And he will have to go back to the place he never wanted to go back. As the day runs out, so does Danny’s options. Will he ever find amnesty in this place he wants to call home?

Migration is not a new thing. Leaving the place you grew up in to explore the world and find your own place in it has been happening for centuries. The problem is however that a huge amount of migrants do not leave their homes by choice.

They are driven out of it, for commercial gain of their masters e.g., the colonials bringing indentured and slave labourers to America, West Indies and Pacific islands or political – refugees of multiple civil and international wars whose homelands are destroyed or they are no longer welcome because they are the minority in the country they grew up in. When the home no longer is home, they take their life in their hands and embark on journeys that do not guarantee any kind of safety or humane treatment on the way. While the developed western countries “sympathise” with the plight of refugees, they also sternly turn them away.

And then there is the migration by choice – in search of a job, money, an escape from poverty for the family. This path is also filled with fraudulent agents who cheat young people on their visas, send them to non-existent institutions where they have to take part-time jobs on meagre pay and no benefits. The developed countries love the migrant labour which is cheap and yet term them ‘illegal’. The worst of it is that the moment one generation of migrants settle themselves as part of their adopted home, they start to frown upon anyone else who is following the same path as theirs. Such is human nature:).

Aravind Adiga highlights all these in Amnesty. But also more. Danny has grown up as part of Tamil minority in Sri Lanka ravaged by civil war. And eventually, he goes to Dubai like many young men to make money. Upon his return, he is tortured by the border control.

After this experience, he does not want to go back to a place where he worked with no breaks and had no control over his own life, but is driven away nevertheless. He spends all his money in getting to Australia and then ends up making a series of poor choices. Although all options facing him lead to back-breaking labour for a few years anyway. It is the desire to be treated like a human being, with some dignity, to not be cheated in all transactions, to not be tortured that leads to him choosing to stay in Australia as an illegal.

People in Australia were famished for what was weird, self-assuredly weird, even belligerently weird: like a Tamil man with golden highlights in his hair. A minority. And once you found out what that word minority means over here, tasted the intoxicant of being wanted because you were not like everyone else, how could anyone possibly tell you to go back to Sri Lanka and once again live as a minority over there?

But the author also shows that the world is a whimsical place and human beings are capricious. Radha and Prakash have all the advantages of growing up in a “developed” country where they have all rights and privileges of education, and yet their existence is not trouble-free either. No matter where you live and grow-up, it is not possible for you to be “exactly” like everyone else and that means, you will be a “minority” in one way or another.

This was the question – Individually no one anywhere ever seems bad. But evil does exist. A man puts on a uniform, and becomes the uniform, and is capable of torturing other humans with no sense of fairness at all.

Like his previous works, the author also shines the torch on the typical ways of our society where praise and condemnation walk hand in hand:

There is a culture of praise where Danny came from. If you were someone, you had to be someone up on a stage, surrounded by loudspeakers, microphones and flatterers. It is the lifeblood of every small city in South Asia. You want to be recognized, honoured, felicitated. Surrounded by printed posters of you, hand painted murals showing you with a dove hovering overhead. Then the lighting of bronze oil lamps, the delivery of consecutive thirty-minute homilies, one or two preferably by a minor politician, followed by the marigold and jasmine garlanding and presentation of the plaque of honor, usually with your name misspelled. Thunderous clapping. You are now the town’s favourite son.

Five minutes later, everything changes. For the felicitation comes with a twin – the whispered subversive truth of the Gutter. Anyone praised up there on the stage must be, later that day, be mocked and tarred…

The book is speckled with how the Indian sub-continent likes to play with the language they have adopted and speak better than the first language speakers of English and filled with pithy sayings that we love so much. There are also some memorable one-liners here and there:

There is a saying in Tamil, the kingfisher shows off, and the eagle hovers all day over water, but the crow is the one who always gets the fish.

The business of helping others will make bigger monsters of us than greed ever did.

There is no way in life to be slightly less fearful…

As the author sets the book over one day, it more or less becomes a thriller. And although the murder had already happened even before we started the story, it is like Danny’s life passing in front of his eyes and he subconsciously realises that this phase of his existence is coming to an end. As you approach the end, you do wonder though as to which way the pendulum will swing.

Previous: Legend of Suheldev – The King who saved India by Amish | Book Review
Next: Enola Holmes Mysteries by Nancy Springer – The Case of the Missing Marquess | Book Review