A book lover’s life is filled with chance meetings with authors on this life-long journey of perpetual quest for new stories. And the world today is such an exciting place when it comes to exploring the written word. If anything, there are sometimes too many choices. Here on Thinkerviews platform, we are always amazed how sometimes an unexpected, impulsive pick-up in the library or a book store leads to finding little treasures of stories.

A few weeks ago, I stumbled across Sujata Massey‘s books. I liked the writing and when I searched for her, I saw that she is a popular writer and has published a fair number of books and won prestigious awards over the past few decades. Her latest creation are books featuring a young, Indian solicitor practicing in Mumbai of the 1920s, so without further ado, let’s delve into the first book of this series: 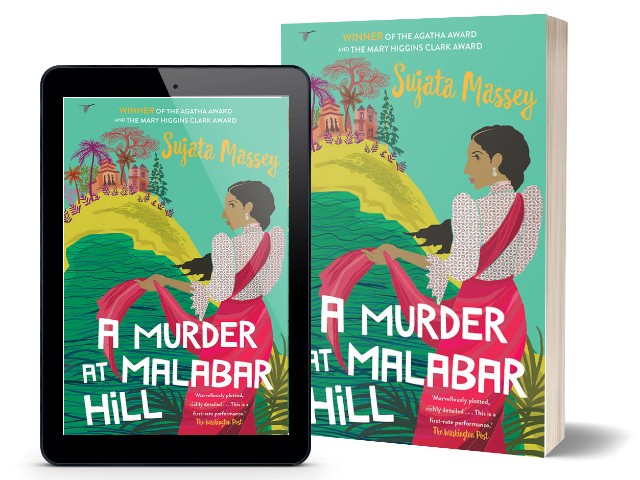 A Murder at Malabar hill by Sujata Massey | Book Cover

I always find that the cover pages for books based in India have a typial flavour to them when they are designed and published outside India. There is a need for such books to play up the exotic factor and this book is not exception with an eye-catching, vibrant, strong colour scheme showing a hilltown and a young woman in the foreground. The woman is featured wearing a sari with an old-fashioned full sleeve blouse and the profile of the face features brown skin, black hair and a hooked nose. This is how the main character is described in the book. 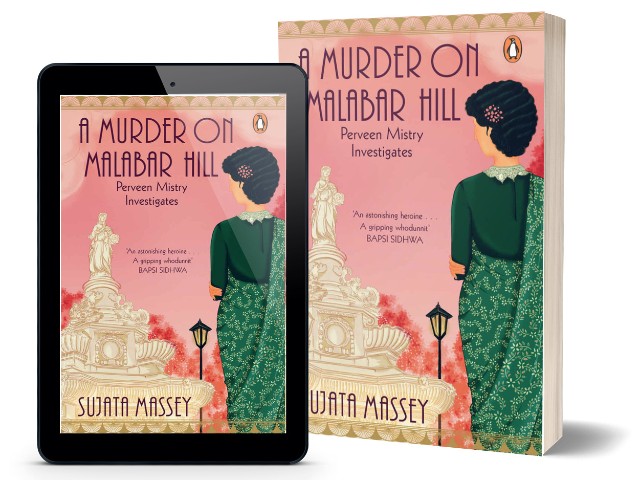 A Murder at Malabar hill by Sujata Massey | Book Cover

There are two threads of the stories. To start we meet Perveen Mistry, a young Parsi woman in Mubai of 1921. She is the only woman solicitor in Mumbai working in the practice of her father Jamshedji Mistry. On this morning though, there is a strange man lurking outside their office at the Mistry House and the past comes haunting.

Only a few years ago, Perveen was a young woman of eighteen, and an only female student at the Government Law College. In spite of being a bright student, she was facing harassment from fellow students and prejudice from the faculties just because she was the only female studying law. One day, the pranks go too far and she decides to quit. On the same fateful day, she meets a young man called Cyrus Sodawalla, who has come from Calcutta to Mumbai in search of a bride.

Cyrus courts Perveen and young, infatuated Perveen ends up marrying him in spite of her family’s reservations about the match. Life in Calcutta is not so bad to start with, but the Sodawallas are fairly orthodox in the way they live. Perveen does not find the support of the family when she wants to go back to college to study languages. She also is expected to live in confinement for the whole week of her monthly periods.

Matters come to head, when Perveen finds that her husband has given her a venereal disease, that her in-laws have been asking her father for money and that her husband is carrying on seeing prostitutes in spite of being married. When confronted, Cyrus attacks Perveen and she comes back to Mumbai – battered and bruised.

Her family supports her and her father pleads her case for legal separation under Parasi law. However, divorce is not an option for her. So, here she is – not yet twenty and scarred for life. But with her family’s support she takes a big step and goes to Oxford to study law, hoping that by the time she came back, the past would be put behind her.

And so back to 1921, Perveen is now working on a case for estate settlement for a diseased man called Omar Farid. He was a rich mill-owner and left three wives and four children behind him. Now a man called Faisal Mukri is dealing as the head of the household as the wives are purdahnashins. Perveen has a few questions about the estate and so she visits Malabar Hill where the three widows – Razia, Sakina and Mumtaz live with their children.

As Perveen treads her way through the intriguing world of this house, secluded from the rest of the world, she finds that there is much more in the background to this estate settlement. And if it was not for Perveen being a woman and hence allowed to talk to the widows, a lot could have gone wrong.

This is a difficult road as it is, but it becomes worse when Faisal Mukri is murdered. Not only that, soon after, Razia’s daughter Amina disappears and Perveen herself is kidnapped one night…

Can she survive and protect herself and her clients?

As you can see above, the book is a rich, detailed, narrative that spans over a few years that are life-changing and formative for the character of Perveen. Both timelines themselves could have been a book, but when interwoven here it becomes such an interesting account. There is enough intrigue and thrill in both narratives where you enjoy the description of the daily life of the people living in that era but also keep wondering as to what’s next to come.

One of the most appealing factors of the book to me was how it highlights the mlti-cultural landscape of India. The author describes the history of Parsis, their daily lives, attire, diet, religious practices and thought patterns through Perveen’s life. She also shows us the world they inhibited in Mumbai of early twentieth century filled with old, grand buildings and quieter lifestyle.

Through the Farid family, she shows us how the wealthy Muslims of the time lived and through Perveen’s friend Alice, she gives us glimpses of the English officers stationed in Mumbai. There are also snippets about the freedom movement and Perveen’s sympathy for this cause.

All the characters are so lovingly detailed here. As the author says, Perveen’s character was inspired by India’s earliest women lawyers: Cornellia Sorabji of Poona, the first woman to read law at Oxford and the first woman to sit the British law exam in 1892, and Mithan Tata Lam of Bombay, who also read law at Oxford and was the first woman admitted to Bombay Bar in 1923. The women of today enjoy so many advantages at education and work fronts and yet some of these struggles are still there today. The battle for equality is fought on so many fronts that it is never ending.

Another plus for the book is for the lovers of law. The book takes us through details of Parasi Law, Hindu Law and Muslim Law as it applied to families in those times. It is worthwhile learning how the rights and responsibilities of family members have changed from those times.
By the way, the word Perveen means star in three languages: Persian, Arabic, and Urdu. And it is her story essentially, but through her life’s journey, the author shows us so many facets of human lives:

A dying man does not feel obligated to observe social norms. He needs no one’s permission to take what he needs.

Every young bride, regardless of religion, struggles with adjusting to the in-laws’ house.

While you admire Perveen for her courage, it is hard not to fall in love with her family either. Her parents support her in many ways, through good decisions and bad and it is by observing her family and then her in-law’s family that Perveen learns:

No matter how unpleasant a person might be, there would always be those who’d raised him and saw a different aspect of him.

You may know that the Parsis came to the Western shores of India – in Guajrat – many centuries ago, and their culture has blended with that of Gujarat. There are glimpses of that in the language and customs as well. I found that some of the proverbs are very similar to those in Gujarati, e.g. “Utavale na pake Amba” becomes “Mangoes will not ripen if you hurry them.”

As Perveen gets more involved in her case for the widows at Malabar Hill, she also sees how their life is so different from hers – they do not leave the house and appear to be dependent upon others for even simple needs and yet they are not so different when it comes to human nature:

Jealousy and resentment were the running themes in this household of women.

Precisely because of their wall and screens, people are curious to know everything.

The boundaries communities drew around themselves seemed to narrow their lives – together it was women and men, Hindus and Muslims, or Parasis and everyone else.

Although she faced some violence in her married life, she realises that as a lawyer, she is going to have to face unpleasant events and characters which may even bring danger to herself:

Perveen didn’t think a murder investigation could be fast-paced. She felt as if she’d just boarded a long-distance train. Who else would come on, and where the journey would end, was far from certain.

The author does not galmourise the British rule in India at the time, but the British characters are mostly on the periphery, except for Alice. Alice and Perveen were very close at Oxford, but as they are both now placed in a different place, Perveen with a job and Alice at loose ends with too much free time on her hand, we see that the dynamics of their friendship also must change. They may still be great friends, but they need to find a way to re-invent their interactions as they navigate their way through Mumbai of 1920s:

Whether in a cinema or a real life, we ladies have a very long road ahead.

I like the book for its positivity. The current trend in the world literature is to highlight the post-world war depression when it comes to the 1920s, but India had its own struggles at the time, and in the world of bleakness all around, there were people who were trying to break the barriers and find a purpose in their lives.

If you have a weekend to lose into contemplating life of a young Indian woman through early twentieth century, then this is the book for you…

The Murder at the Vicarage by Agatha Christie| Book Review

Previous: Eat Up, Clean Up By Manjari Chandra | Book Review
Next: Legend of Suheldev – The King who saved India by Amish | Book Review