Posted by: Editor September 9, 2020 in Books, English Leave a comment

Growing up without adventure stories will make our childhood incomplete.

The joy of exploring new places in the school holidays is one of the most anticipated activities for children of all ages. And especially teenagers as they have opportunities to go to school trips and campings with their friends and discover the joys of learning from the school of nature but also to develop hobbies like bird watching or mountaineering that will enrich their whole lives.

While the joys of vicarious travel are now abundant in form of travel shows and videos, there is nothing quite like having a pair of brave teenagers who go to some of the most exciting places in India and find an adventure they weren’t looking for. One such series is written by author Deepak Dalal featuring Vikram and Aditya as he takes them to places like Lakshadweep, Ranthambhore, Andaman and many more.

Recently, in the lockdown exploration of the kindle collection, we read some of these stories and here are my thoughts on the adventure that takes place in Ladakh. First published by Tarini Publishers in 2000, the book has some truths and observations which will still resonate with the readers as the troubles of this land appear to be still far from over.
The author is an avid nature lover himself and is exploring nature in all his free time. You can visit his website to get a glimpse of his wonderful world –

A classic coverpage showing the majestic Blacknecked cranes could be just as easily on a travel book. The majestic Himalaya makes up the skyline in the background inviting you to this wonderful world. 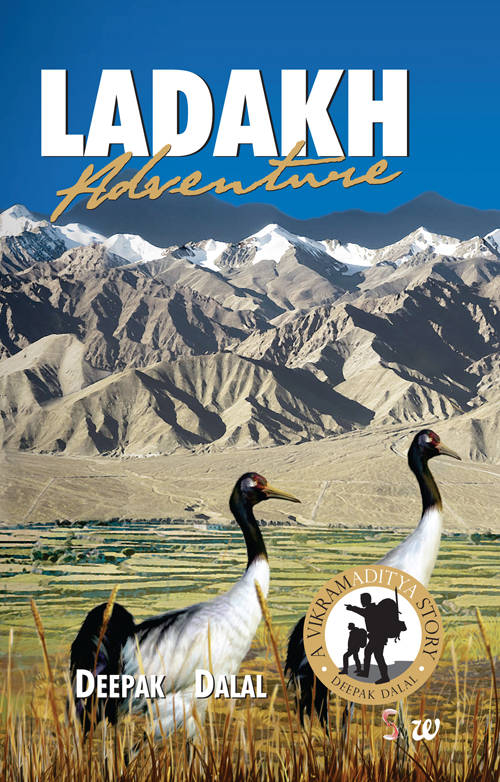 A cover page that will attract all browsers who love travel and adventures.

In the pristine Himalayan morning, Vikram is enjoying watching some of the rarest birds on the planet. The peace of this morning is shattered not only by animal predators, but also by human predators who snatch a boy called Tsering from Vikram’s camp.

Fortunately, Vikram is able to summon help from Aditya who is riding horse while Vikram relays to him that some people in a jeep have just kidnapped Tsering. Aditya manages to block the jeep’s pathway with yaks and snatches Tsering right back. Together, Aditya and Tsering ride into the mountains and lose the kidnappers for at least the day.

Vikram and Aditya keep in touch through their radio handsets and eventually decide to spend the night in the company of other travelers who seem to be their safety net. In spite of all precautions, the goons attack and imprison the boys in the night. With some courage and some luck, the boys escape and their Swedish travelling friends bring them to Leh.

There is a school in Leh where there is a safe home for Tsering. Vikram and Aditya’s beloved friend and guardian in this land Meme Chacko finally tells them about Tsering’s past and why he is being pursued.

As Tsering appears to be in safe hands now, Vikram and Aditya continue planning their field trip to go in search of the elusive snow leopard.

However, their enemies are still following the boys and they manage to kidnap Tsering again. Will Vikram and Aditya be able to find their dear friend back?

This book transported me to my growing up days and how interesting and exciting it felt to be able to go and camp in nature without the daily comforts and luxuries of home. The journey and the newness of each place visited compensated for everything you left behind. In the modern world, such places are becoming a rarity as a lot of animals that roamed the earth freely only a few hundred years ago are now restricted to national parks and zoos and even then their numbers are shrinking.

Also, such a journey took us away from our little material possessions. We learnt to live without some things, and learnt to live with other. On such adventures, children learn how to pitch a tent, find water, cook meals and in general manage to live outside their home. There is obviously no television :), so you learn to listen to silence and enjoy the majestic beauty of this earth.

The author gives us a glimpse of the beautiful province of Himalayas, where he takes us in this book:

Ladakh – The scale of everything in this frozen outpost of India was large, and the lakes, stretching for miles on end, were no exception. But as expressive as the adjective ‘large’ is, it isn’t adequate for describing the grassy plain surrounding the lakes. The plain was a vast, seemingly boundless area of land. The lake basin was easily 100 square kilometers in area. To top it all, the wonderful panorama was adorned by the presence of magnificent snow-capped mountains surrounding the Tso Kar basin.

In the southern reaches of the massive Changthang plateau of Tibet lies the sacred mountain Kailash and its emerald lake, Mansarovar. Mount Kailash is famous not just because it is a holy place but also because the highlands that surround it are the birthplace of some of Asia’s greatest rivers, including the Indus and the Brahmaputra. Emerging from an almost identical source, these rivers flow in opposite directions and complete their journey in the Bay of Bengal in East and the Arabian sea in the West. Flowing north across the Changthang plateau of Tibet, the Indus enters India at Ladakh. Cutting through the heart of this northern district it then flows into Kashmir and from there into Pakistan. The river is fast flowing and smooth near Leh where it rushes across a wide plain. But in the mountainous region east of Leh, the river is often a noisy torrent, frothing and foaming as it sweeps through narrow alleys and deep gorges.

Tibet is the land that lies beyond the Himalaya, the great plateau that borders the Himalayan regions of India, Nepal and Bhutan. Geography books also call Tibet the ‘roof of the world’, which is true. With an average height of 15,000 feet above sea level, the Tibetan plateau – or the Changthang as it is often called – lies high above the rest of the world. The winters there are severely cold and rainfall is limited. Although they call Tibet a plateau, it is not particularly flat. Tibet is an immense, rolling stretch of land, intersected by mountain ranges.

While the above paras are almost like a history and geography lessons, below is one of the paras that I liked most. Here the author talks about how these mountains can make us feel – small, insignificant, desolate, grateful, defiant, enthusiastic and ready to take their challenge all at once sometimes:

The mountains soared above them, some snow-capped, others bare. In a chameleon-like manner, the mountains kept changing colours. In some sections they were shaded brown, in others they were purple; sometimes they appeared orange and sometimes golden. It was a grand wilderness, hostile and inhospitable to the extreme, yet magnificent to behold. Sheer mountainsides; windswept peaks; boulder-strewn slopes; tonnes of delicately balanced screen twisting gorges; a frothing river – the images piled one upon the other, moving the viewer deeply, evoking in him a profound sense of desolation.

I enjoyed reading this book very much for not only its interesting setting but also its light-hearted, adventurous characters who do not feel overburdened by life, but enjoy the majestic beauty of nature and all that comes with it. They also act responsibly towards understanding and preserving it, e.g., Meme Chacko is in his seventies, retired and passionately devoting every summer to study one of most rare and endangered species of bird – the black-necked cranes:

In India, blacknecked cranes are found only in Ladakh. Just fifteen pairs nest in the far-flung corners of the Changthang plateau. Little is known about them. In fact, of the fifteen species of cranes that exist on our planet, blacknecked cranes were the last to be discovered. Their habits, their numbers, their migration patterns were all a mystery.

But anything that is this unspoilt and that feels like a timeless place cannot remain so for ever. The world has a way to encroach and make its effect felt, whether it is through tourism and the money it brings or the lure of the modern life and its comforts. There is also an increasing trend of modern lives leaning towards materialism and focusing on the outer self and creature comforts rather than living simply, in harmony with your surroundings and preserving traditions:

Bollywood films, satellite TV and tourist have all had a damaging effect on Ladakhi youth. The youth, have turned into city sorts, rejecting the outdoors and looking down at those who live off the land. They have lost the ability to suffer hardship and are rejecting the ways of old. They don’t wear their traditional clothes anymore.

Just twenty kilometres from Leh, the barren slopes fell behind and they drove between rolling fields. Stands of wheat and barley, bright in the setting sun, rustled in a mild breeze. They passed an elderly Ladakhi lady in red robes, bent double under a load strapped to her forehead. Red-cheeked children played beside the road. Two pretty girls in traditional clothing waved as they passed by. It was a different world. There were no tourists, no bustle, no garish movie posters; no hotels and no western-dressed Ladakhi youth. They had stepped back into a timeless place.

The author weaves in a lot of tips and tools of the trade for young, enthusiastic travelers who might be planning their own trips and or would love to go on such adventures, e.g., what to carry in your backpacks, how to prepare for camping at night in freezing climate and how to respect the local culture and tradition while you are on such a journey.

There is an element of chase all throughout the book that keeps the reader interested. If you are familiar with the stories of Dalai Lama and the unrest surrounding Tibet, you can make a very good guess at the secret behind the kidnappings in the story, but you will still find some information that might surprise you.

With a mere 2.5 hours reading time this book is a perfect read for lovers of adventure stories looking at exploring new places. And I think it will be good for all those kids who love their city life but would also like to experience camping out in nature and understand how deeply everyone and everything on this earth is connected. We need to preserve and respect nature and our home – Earth. We’ll survive only if we learn to nurture and sustain those who make this world as we know it and the parts that we have yet to discover…